‘Congress will seek compensation for COVID-hit’ 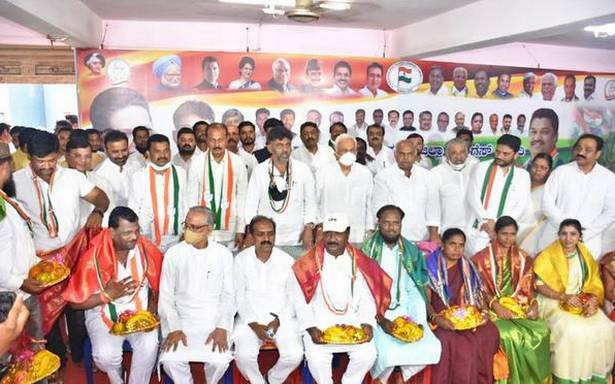 KPCC president D.K. Shivakumar has said that the party would raise the issue providing compensation to people who lost their family members and jobs and are unable to make ends meet due to COVID-19, during the legislature session.

Addressing presspersons in Hubballi on Sunday, Mr. Shivakumar said that many people lost their lives in the pandemic, while several others were facing hardships due to huge hospital bills and lakhs of people had become unemployed. There was need for mitigating their sufferings by providing requisite compensation. The party would raise the issue, he said.

On Mahadayi and Mekedatu, he said that former CM Jagadish Shettar and CM Basavaraj Bommai often speak a lot about both the projects and now that their own party was in power, he would wait to see what they do, he said.

On the debacle faced by Congress in the municipal election, he said that because of the wrong decision by party leaders, the Congress failed to win an adequate number of seats in Hubballi Dharwad Municipal Corporation (HDMC). Instead of giving tickets to winnable candidates, others were fielded yielding to pressure. Consequently some workers contested as Independents and won, he said,adding that they were in contact with the party and had promised to continue as per the party’s ideology.

Mr. Shivakumar challenged Union Minister Pralhad Joshi and Mr. Shettar to make a statement that the results were satisfactory for their party. He alleged that being in power, the senior leaders ensured delimitation of wards and fixed reservations as per their requirements. However despite misuse of government machinery, they had failed to succeed and voters of the twin cities had taught them a lesson, he said.