Congress not to join panel to probe Rajya Sabha ruckus 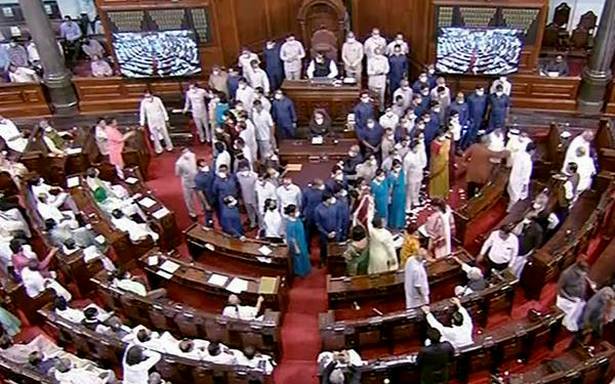 The Congress has refused to be part of the special committee that Rajya Sabha Chairman M. Venkaiah Naidu wants to constitute to investigate the proceedings of the last day of the recently concluded monsoon session, which were marred by violent protests and scuffle between the members and the security staff.

Leader of the Opposition in the Rajya Sabha Mallikarjun Kharge, in a letter to Mr. Naidu, said the “inquiry committee on the incident of August 11” seemed to be designed to intimidate MPs into silence. “It will not only suppress the voices of people’s representatives but will deliberately brush aside all those that are uncomfortable to the government. I am, therefore, unequivocally against constituting the inquiry committee and the question of our party proposing the name of a member from our party for nomination to this Committee does not arise,” he wrote.

“Currently, the House is not in session and we believe this issue can be discussed only at an all-party meeting ahead of the winter session,” Mr. Kharge told The Hindu.

His letter was in response to the phone call made by Mr. Naidu to him and to the other floor leaders of the Opposition parties. Sources said the Dravida Munnetra Kazhagam (DMK), too, had declined the offer.

The Trinamool Congress was never invited to be part of the committee, the sources added.

Mr. Kharge, in his letter, said the Congress and the rest of the Opposition parties were “willing and eager” to discuss all matters of public importance and had given notices to debate the economy, farmers’ protest, inflation, rise in fuel prices and essential commodities, the Indo-China conflict and the Pegasus spyware issue. “We did so in sincere belief that the government of India is committed to transparency and needed to be forthright to the nation about these issues,” he wrote.

Unfortunately, he said, the government not only brushed aside the Opposition parties’ demands for discussions but also rushed through crucial Bills, bypassing parliamentary scrutiny of any form.

He also taunted the government over the absence of senior Ministers. Prime Minister Narendra Modi came only once to both Houses to introduce his Council of Ministers. Home Minister Amit Shah did not turn up on any day in the Rajya Sabha.

Mr. Kharge put the onus on the government for creating a conducive environment for healthy discussions. “Parliament has had a history of similar protests, many initiated by the ruling dispensation when it was in the Opposition. As you are well aware that many from the ruling party have in past posited that expressing dissent in this manner is acceptable in a parliamentary democracy,” Mr. Kharge wrote.

The monsoon session came to an abrupt end, two days ahead of schedule.