Congress demands cut in LPG, diesel, petrol prices on all days of Navratri 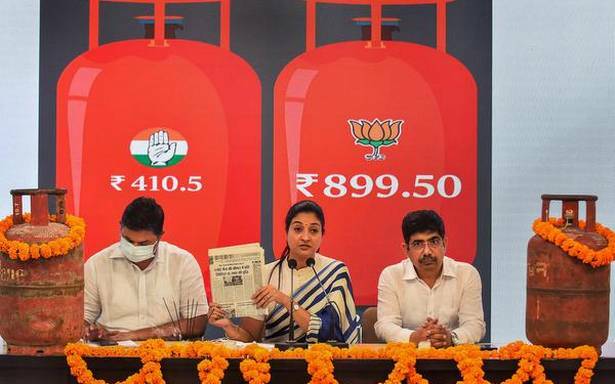 In a unique form of protest against ₹15 hike in the retail price of cooking gas , Congress spokesperson Alka Lamba on Thursday ‘worshipped’ an empty Liquefied Petroleum Gas (LPG) cylinder soon after addressing a press conference on the issue of prices of LPG and other petroleum products at the party headquarters.

On Thursday, the retail prices touched a record high- a litre of petrol reached ₹ 103.24 in Delhi and ₹109.25 in Mumbai. In addition, a non-subsidised LPG cylinder in Delhi now costs ₹ 899.50.

At the press meet, Ms. Lamba demanded that the Union Government should continuously reduce the prices of cooking gas, diesel and petrol on all the nine days of Navaratri. She claimed that petrol and diesel prices have been increased nine times between September 24 and October 7.

“Since one woke up to the news of a ₹15 hike in LPG cylinder on the first day of Navratri, I would request the Prime Minister that the price should be reduced for all the days of Navratri,” she said.

Senior leader Digvijaya Singh, who heads a party panel on planning agitations, took to Twitter to target the government over the price rise.

“Petrol and diesel prices continue to rise. Modi-Shah Government is taking money out of the pockets of the general public and filling their own treasury, only to further spend it on big corporate,” he stated.