Miami (AFP) - Patrick Mahomes led a thrilling late comeback as the Kansas City Chiefs ended their 50-year wait for a Super Bowl crown with a 31-20 victory over the San Francisco 49ers on Sunday.

Chiefs quarterback Mahomes shrugged off an error-strewn start to overturn a 20-10 49ers fourth quarter lead in a gripping battle for the Vince Lombardi Trophy at the Hard Rock Stadium.

The Super Bowl win was Kansas City's first NFL Championship since their triumph over the Minnesota Vikings in 1970, and only their second ever.

And it owed everything to the nerve of Mahomes, who for the third straight postseason game led the Chiefs back from a double-digit deficit to seal a dramatic win.

"We kept believing," said Mahomes, who was later named Super Bowl MVP."That's what we've done all postseason.They guys really stepped up.They believed in me...We found a way to win it in the end."

The Chiefs quarterback had looked out of sorts until early in the fourth quarter, throwing two interceptions in the face of fierce pressure from the magnificent San Francisco defense led by the marauding Nick Bosa.

But with the game on the line in the fourth quarter, Mahomes led his team on two long drives to set up touchdowns for tight end Travis Kelce and running back Damien Williams.

Those scores put the Chiefs into a 24-20 lead and Kansas City made the game safe when Williams danced up the sideline for a 38-yard rushing score with 1min 12sec remaining.

Mahomes finished with 286 passing yards and 26 completions from 42 attempts with two touchdowns.The Chiefs quarterback also rushed for a touchdown early in the first quarter.

But the defeat was desperately hard on the 49ers, who were chasing a record-equalling sixth Vince Lombardi Trophy.

The 49ers had barely put a foot wrong through three quarters, with their defense shackling Mahomes superbly and their offense moving the ball confidently to put them in the driving seat late in the game.

But as the pressure in the fourth quarter mounted, 49ers quarterback Jimmy Garoppolo's sure touch deserted him and the Niners offense dried up.

With Mahomes leading the Chiefs on two long drives to engineer a 24-20 lead, Garoppolo had one last chance to lead the 49ers on a game-winning drive with 2min 44sec remaining.

But the Chiefs defense suddenly began to find gaps to pressure Garoppolo, and when he was sacked on 4th&amp;10 to hand possession back to Kansas City, the writing was on the wall.

Two plays later Williams then drove the final nail into the 49ers coffin, finding space down the left hand touchline and galloping into the endzone for a score to make it 31-20.

Garoppolo was then intercepted on the next 49ers possession and it was left to Kansas City to run down the clock for victory.

The win was a long-awaited first Super Bowl triumph for Chiefs head coach Andy Reid, the 61-year-old veteran long regarded as the best NFL coach not to win a championship.

Reid later praised his team's composure under pressure."We knew it'd be a close game, and we knew there would be some challenges that we'd have to battle through -- nobody lost their poise," Reid said.

But the fourth quarter collapse was cruel on 49ers coach Kyle Shanahan.

Shanahan had been the offensive co-ordinator for the Atlanta Falcons at the 2017 Super Bowl when they let a 28-3 lead slip in a stunning loss to the New England Patriots.

The fourth quarter drama came after a nip-and-tuck opening three quarters with little to choose between the two sides.

Mahomes' rushing touchdown in the first quarter and a Harrison Butker field goal had helped Kansas City into an early 10-3 lead.

But Garoppolo found Kyle Juszczyk for a 15-yard touchdown in the second quarter to make it 10-10 at halftime.

A Robbie Gould field goal and a touchdown from running back Raheem Mostert helped put the 49ers 20-10 ahead and momentum seemed to have decisively in San Francisco's favour.

At that point Mahomes had looked off-colour for much of the game, throwing two uncharacteristically sloppy interceptions as the Chiefs struggled to build momentum.

But once again the Chiefs ability to score quickly came to their rescue.

Mahomes hit receiver Tyreek Hill for 44 yards on the drive that led to Kelce's touchdown to make it 20-17.

Another 38-yard completion to Sammy Watkins on the next Chiefs drive led to the go-ahead touchdown for Williams and a crucial 24-20 lead.

"Doesn't matter what the score is, we've got Pat Mahomes," Kelce said afterwards."And you know what?I love him." 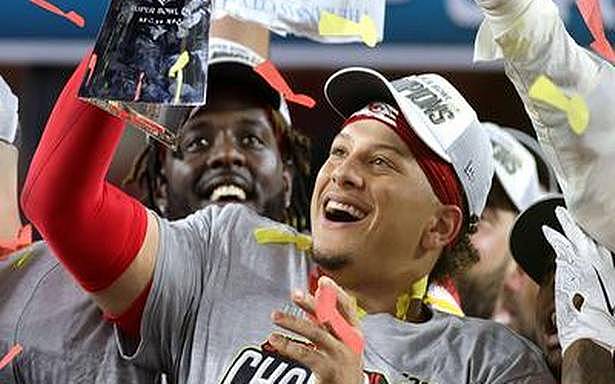 The Independent UK
After leading Chiefs to Super Bowl win, the future belongs to Mahomes

Evening Standard
Chiefs win first Super Bowl since 1970 with thrilling comeback against 49ers
The Kansas City Chiefs are Super Bowl champions for the first time in 50 years, scoring three touchdowns in the…

That was a special fourth quarter from Patrick Mahomes.