The libel case being fought between footballers’ wives Coleen Rooney and Rebekah Vardy – married to Derby County manager Wayne Rooney and Leicester City striker Jamie Vardy respectively – has returned to the High Court in London and is continuing to excite interest.

Ms Rooney, 35, is being sued for defamation by Ms Vardy, 39, after she publicly accused the latter of being the source of stories about her that were leaked to The Sun newspaper.

The saga began on 19 October 201 when Ms Rooney took to Twitter to issue an astonishing attack on Ms Vardy, accusing her of betraying her confidence in pursuit of personal gain.

Ms Rooney explained in a tweeted statement that she had become concerned that posts from her private Instagram account were being passed to the tabloid and turned into stories.

To whittle down a list of suspects and to try to identify the culprit, she explained that she had, ingeniously, restricted access as to who could see her posts and begun salting her account with false information as bait, including bogus “stories” about her travelling to Mexico to explore gender selection treatment, being in negotiations to appear on the BBC’s Strictly Come Dancing and the family suffering flood damage to their £20m mansion.

“I blocked everyone from viewing my Instagram stories except ONE account,” the former Closer and OK! magazine columnist explained. “Over the past five months I have posted a series of false stories to see if they made their way into The Sun newspaper. And, you know what, they did!”

“I have saved and screenshotted all the original stories which clearly show just one person has viewed them,” she continued, before dramatically revealing: “It’s……… Rebekah Vardy’s account.”

Ms Vardy, seven months pregnant and on holiday in Dubai at the time, responded that same day with a strong denial, chastising her accuser for not coming to her first with the complaint and rejecting the idea that she needed either the money or the exposure.

“If you thought this was happening you could have told me & I could have changed my passwords to see if it stopped,” she pointed out.

“I liked you a lot Coleen & I’m so upset that you have chosen to do this, especially when I’m heavily pregnant.”

She was dubbed “Wagatha Christie” for her whodunnit cunning in honour of the legendary British crime novelist of Murder on the Orient Express and Ms Marple fame as thousands took to Twitter to suggest she be appointed by the government to expose political leaks from 10 Downing Street.

As exhaustively documented by Sophie McCoid and Rebecca Koncienzcy of The Liverpool Echo, the fallout saw the likes of model Danielle Lloyd, Netflix and even Boris Johnson’s elderly father Stanley weigh in on the controversy while breakfast TV shows hosted “War of the Wags” segments, taking soundings from other footballer’s wives like Chantelle Heskey.

The husbands concerned largely stayed out of it, although Jamie Vardy did “like” his wife’s initial denial tweet, but Rebekah Vardy and her father, Carlos Miranda, both gave exclusive interviews to The Daily Mail on 10 October 2019 denying the allegation against her and repeating the suggestion that her Instagram account must have been hacked.

Asked if she had ever argued with Coleen Rooney, Ms Vardy offered the immortal answer: “That would be like arguing with a pigeon. You can tell it that you are right and it is wrong, but it’s still going to s*** in your hair.”

Recounting the initial phone call she had with her accuser to try to iron out the dispute, Ms Vardy said: “I said to her: ‘Coleen, what on earth have you done?... You have just annihilated me in public and hung me out to dry. The whole world hates me!’”

Later that month, with the row beginning to die down at last, Jamie Vardy scored a hattrick for Leicester as his side demolished Southampton 9-0, prompting his wife to mock the whole affair by tweeting: “It’s...... Jamie Vardy #9.”

Rebekah Vardy gave birth to a daughter on 28 December, with an apparent Christmas truce declared, only for the coronavirus pandemic to strike the world the following spring and leave the “Wagatha Christie” affair very much on the back-burner.

Then, on 12 June 2020, Ms Vardy filed her application to sue Coleen Rooney for libel with the High Court, the complainant’s lawyers arguing that the affair had caused her mental and physical distress and had meant the family could no longer attend Leicester games together because of the abuse they received from rival fans.

“It is disappointing that Mrs Vardy has chosen to issue court proceedings,” Ms Rooney’s legal representatives said at the time.

“Coleen feels that the time and money involved could be put to better use; her offer to meet face to face still stands. Mrs Vardy’s decision to issue court proceedings does at least mean that Coleen’s evidence can be made public when the time is right.”

Following a preliminary hearing at the High Court, with neither woman in attendance, Justice Warby ruled on 20 November in favour of Ms Vardy and allowed the case to continue, finding that Ms Rooney’s tweet “clearly identified” Ms Vardy as being “guilty of the serious and consistent breach of trust that she alleges” and ordering Ms Rooney to pay £23,000 in legal costs.

The pair were given until 8 February 2021 to make an attempt to mediate their case but failed to find a solution and declined to settle out of court.

With the case back at the High Court in July and threatening to prove costly and embarrassing to both parties, Justice Steyn, presiding, threw out arguments by Ms Rooney concerning Ms Vardy’s allegedly close relationship to The Sun and her alleged authorship of the paper’s short-lived “Secret Wag” column, which Ms Vardy denies, saying the accusations were “irrelevant and peripheral”.

The judge also dismissed a claim by Ms Rooney that Ms Vardy had demonstrated “publicity-seeking behaviour” by moving seats to sit behind her during England’s game against Wales at the Euro 2016 tournament in order to ensure she was photographed by the press.

Justice Steyn ruled that, even assuming the allegation was true, it would not help Ms Rooney’s case.

“The fact that a person seeks media coverage of their own attendance at a football match does not make it more probable that they would disclose private information about another person to the press,” she said, adding that it would be “a waste of time and resources” to pursue the matter.

The judge also tossed aside an allegation from Ms Rooney that Ms Vardy was engaged in leaking stories about the case itself to the same red top.

“While this is an allegation of leaking confidential information to The Sun, the nature of it is very different to what was alleged in the post,” the judge remarked.

“Notably, the defendant has pleaded it in support of the contention that there is a close relationship between the claimant and The Sun, rather than as an instance of the claimant disclosing another person’s private information.”

Justice Steyn did, however, say the allegedly close relationship between Ms Vardy and the newspaper was “one of the building blocks” of Ms Rooney’s inferential case, commenting: “I accept that an exceptionally close relationship between the claimant and the newspaper or journalists to whom the defendant’s posts are alleged to have been disclosed is probative of the plea of truth, albeit on its own it would not take the defendant far.”

She continued: “It can, at least, be said to be less likely that a person with no such relationship would regularly disclose private information about others to that newspaper or those journalists and, perhaps, less likely that the disclosure would, on its own, result in a published article.”

Ms Vardy’s lawyers had argued that removing parts of Ms Rooney’s defence would save £200,000 in their legal costs and cut the length of the trial by three to four days.

However, Ms Rooney’s lawyers countered that the request was a tactical move as parts of the defence would “undermine [Ms Vardy’s] case as well as embarrass her”.

Justice Steyn later dismissed Ms Vardy’s bid for summary judgement – a legal step that would see that part of the case resolved without a trial – in relation to Ms Rooney’s claim that Ms Vardy leaked a story to The Sun about her returning to TV presenting.

She concluded: “It is one of many factual issues to be resolved at trial in determining whether the truth defence is made out. It seems highly unlikely that resolution of this issue would assist the parties to settle the claim.”

After the ruling, Paul Lunt, a partner at Brabners – the law firm representing Ms Rooney – said they were “pleased, but not surprised” that the court had dismissed Ms Vardy’s application for a summary judgment.

The saga returned to the High Court for a two-day hearing in early February 2022 when WhatsApp messages between Ms Vardy and her agent Caroline Watt were presented in which the former allegedly referred to Ms Rooney as a “nasty b***” and “a c***” and said she “would love to leak those stories x” in relation to posts on the latter’s Instagram page.

The court also heard that evidence from Ms Watt’s phone was not availble because the device had fallen into the North Sea, a development Ms Rooney’s barrister, David Sherborne, described as “most unfortunate, because it was only a short time after the court ordered that the phone should be specifically searched”.

Mr Sherborne said of the claimant: “From the outset, Mrs Vardy has always claimed that neither she nor Ms Watt were involved in the leaking of private information from Mrs Rooney’s Instagram account. The recent disclosure has shown that this is emphatically not the case.”

Hugh Tomlinson QC, representing Ms Vardy, again denied the allegations against his client and repeated that they have caused her “huge damage and distress”.

The trial continues this week. 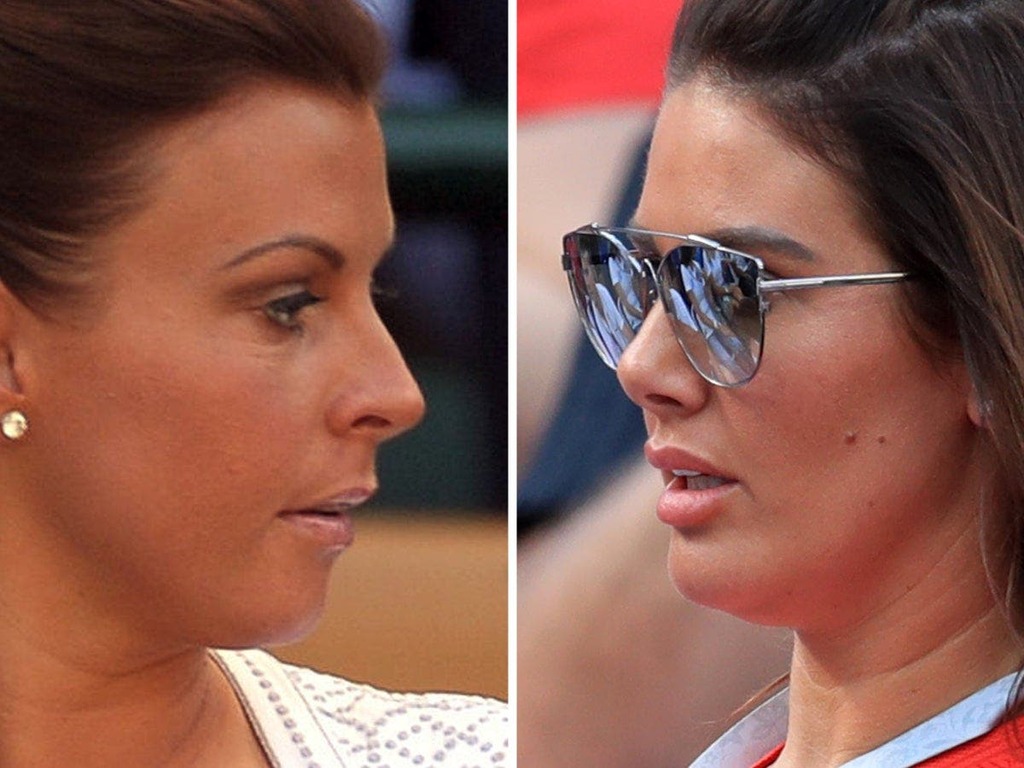