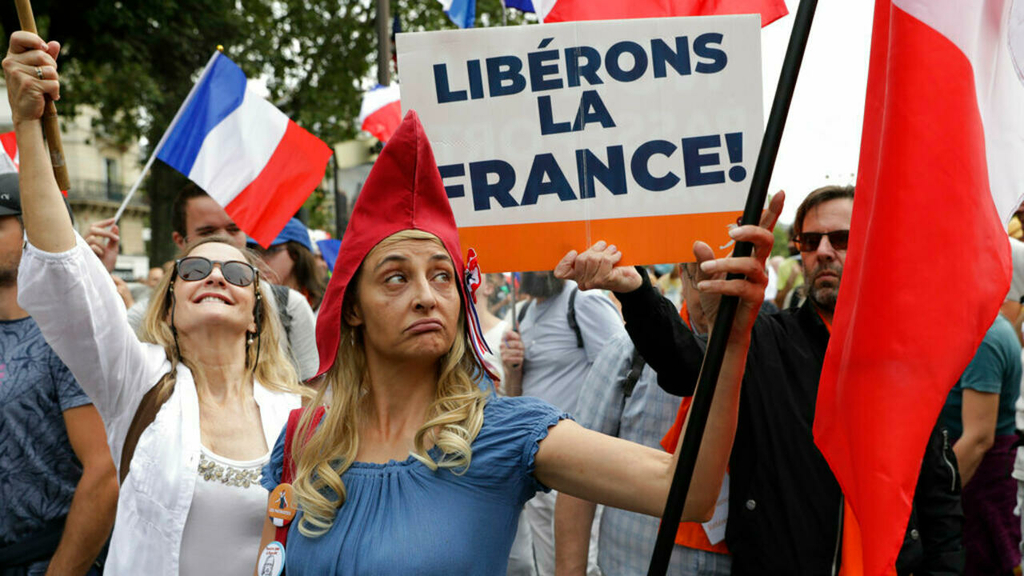 France’s coronavirus health pass – the strictest in Europe – saw 12 million people hurriedly get themselves a Covid vaccine so they could carry on eating in restaurants, going to museums and enjoying other staples of French life. But while the policy has largely worked to get people vaccinated, it has also alienated a considerable chunk of the population who are furious at the state’s abduction of their personal freedoms.

Since 9 July, the pass sanitaire has been introduced progressively as part of a law that also requires healthcare workers and restaurant staff to be vaccinated, or be sacked.

The government says such measures are vital to speed up vaccinations and avoid a fourth lockdown. Thanks to the health pass, almost 70 percent of the population is now fully vaccinated.

While the vast majority of French people have fallen into line – an achievement for a country known for its vaccine hesitancy – a small number have organised a fierce resistance.

Each Saturday for the last nine weeks, up to 200,000 people have staged street rallies in Paris and other cities to denounce the health pass. They have sometimes turned violent.

The movement has galvanised a motley crew of protesters, from anti-vaxxers, populist Yellow Vests and conspiracy theorists, to people worried about digital privacy, the loss of individual freedoms, and the two tier-society that "vaccine discrimination" stands to create.

Protestors march under a number of banners. Separate rallies have been called by the Yellow Vests and by hard-right politician Florian Philippot, of the Les Patriotes nationalist party.

Others have been organised by associations around the theme of freedom, including one supported by Pierre Barnerias – author of the controversial documentary Hold Up, which claimed the Covid-19 virus had been created by France's Pasteur Institute.

Listen to an audio report with protestors in the Spotlight on France podcast:

He says it shows they're more likely to be affiliated with the hard-right National Rally party, the hard-left France Unbowed party or to be apolitical.

Politics aside, they're more likely to be among the working class, living in cities and belong to the 25-34 age group.

Younger people "consider they’ve been the most impacted by health restrictions while seeing themselves at least risk,” Bristielle told French daily Libération.

“The split is not so much between left and right as it is between the people and elites,” he added.

There was also a rejection of political institutions, seen as unwilling to listen to the people or respond to their needs.

In this respect, there is crossover with the Yellow Vest protests, which began in 2018 in angry reaction to fuel price hikes before flourishing into a wider anti-government movement. President Emmanuel Macron was a particular target.

Eighty-eight-year-old Gilbert sets off on a march in Paris wearing his fluorescent yellow vest and pushing a wheelchair with the words “I’ll burn your pass Macron” painted on it.

He finds it “unbearable” to be made to show his credentials "to see a doctor or sit on a terrace”.

He speaks openly about being unvaccinated: “Everyone's talking about a third dose, but I still need the first,” he smiles, revealing his two remaining front teeth.

Health Ministry data shows that 73 percent of the 115,000 people who have died of Covid in France are 75 and over but Gilbert says he doesn't feel vulnerable, despite being fitted with a pacemaker.

He questions the numbers. “I don’t trust the government at all, or the media. There are lots of lies.”

Asked whether the doctors are lying, too, he says: “Lots of them are Macronists; they have to toe the government line.”

While vaccination in France remains voluntary, critics say the health pass is the government's back door way of forcing people to get the jab regardless.

Maurice, another protester in Paris, warns that France is in "great danger". Waving his “Kontrolistan” banner, he says: “This country is increasingly governed through control, obligation and bans.

“Our government is using monstrous blackmail to enforce its decisions. They say you have to get jabbed, otherwise you’ll lose your job and your salary.”

Maurice won't be drawn on whether he supports vaccination, saying the media “puts too much focus on anti-vaxxers to discredit the others”.

Bernard, a retired veterinary surgeon, is pro-vaccine overall, but vehemently against the health pass.

“Covid is certainly a serious illness, but I don’t believe it justifies forcing people to get the jab via the health pass," he says. "We must have the freedom, the choice, to get vaccinated or not.”

High vaccination rates in countries such as Israel, Iceland and Malta have not prevented new waves of infections or new variants from spreading, Bernard adds.

Some demonstrations have been infiltrated with strains of anti-Semitism, with protestors under investigation for carrying banners implying certain Jewish people had profited from the pandemic.

Meanwhile others claim the vaccines themselves are killing more people than the virus. Those who support the QAnon far-right conspiracy group believe this is a deliberate plot to exterminate part of the human population.

“They’re imposing a measure that is tantamount to rape, penetrating people's bodies with an experimental substance," says real estate worker Stéphanie. "I call that a genocide.

“It’s a heavy word, but it really is a secret war against the people and nobody’s talking about it.”

Nurses are leaking information, she says, about “terrible, irremediable” side effects and “no one is allowed to do autopsies” on the corpses.

The forbidden autopsy rumour has been debunked, however, and Health Ministry data reveals eight out 10 people who die of Covid are unvaccinated.

For Stéphanie, though, any official information is false by definition.

“No one is blinder than the person who refuses to see,” she says with a touch of parting menace.

Neither QR code nor QAnon

France's health passes are governed by QR code technology, which can be shown in digital form or on a printed piece of paper.

One young man holding a placard reading “Neither QR code nor QAnon” is keen to put some distance between himself and the conspiracy theorists.

“Being against QR codes doesn’t mean being a QAnon supporter,” he says – adding that just because a person is against the health pass does not mean they are against the vaccine.

“We’re living in an increasingly controlled society, you can’t even be anonymous in a café now,” his partner chips in.

As young people in their 20s, the couple is also uneasy about the way the health pass is atomising society, "driving a wedge between the vaccinated and the unvaccinated, and compounding inequalities".

Meanwhile the push to get children over 12 vaccinated has hit a nerve among many protestors. After 30 September people in this age group, just like their parents, will need a health pass to access public places.

“There are 5 million people with co-morbidities in France who are not vaccinated, and they’re asking me to vaccinate my kids,” rails health worker Marie-France. “Kids aren’t the ones who’ll be filling up the ICUs.”

She says she’s not anti-vaxx – her daughter has had them all including papillomavirus – but she won’t let her have the Covid vaccine because she doesn’t consider it safe.

“We call it a vaccine, but it’s not even a vaccine. It’s undergoing clinical trials until 2023,” Marie-France argues.

The mRNA Covid vaccines produced by Pfizer-BioNtech and Moderna are indeed in their third phase of clinical trials – although human trials of cancer vaccines using the same mRNA technology have been going on since at least 2011.

Pfizer's trial will run until May 2023, and Moderna's until October, 2022. The labs say phase 3 is simply about validating the first two phases, which showed high levels of protection against the most serious forms of Covid.

The US federal drugs agency fully approved the Pfizer BioNTech vaccine last month. It is to be marketed as Comirnaty.

Suspicion over "big pharma" is rife, however, and news that the pandemic has produced new billionaires has done little to reassure people.

“I’m trying to think for myself, ask myself questions,” says Marie-France. “But there’s thought-policing. If you don’t think like the government, or like the majority, you’re labelled a conspiracy theorist, a murderer.

“They say this is the country of human rights, what a joke. Where is our freedom today?”

Concerns over the sharing of medical data and wariness of vaccine safety are not exclusive to France, but they carry additional weight in a country where trust in politicians, government and public institutions is waning.

This was reflected by the Yellow Vest movement, and confirmed in recent regional elections that saw record rates of abstention.

The situation is radically different to that of Denmark, the first EU country to introduce health passes. It was also the first to return to a pre-pandemic daily life when it lifted all coronavirus restrictions on 10 September.

Danish experts have pointed to the high level of trust the people have in their authorities.

“If you have low levels of trust, then more draconian laws are potentially required to contain the coronavirus," political scientist Gert Tingaard told Science Nordic.

The problem for French politicians, adds Antoine Bristielle, is that they have never treated this structural problem of trust.

"They now find themselves confronted by the impossibility of introducing anything other than coercive measures when there’s an emergency.”

This story is part of the Spotlight on France podcast: Listen here Subscribe here