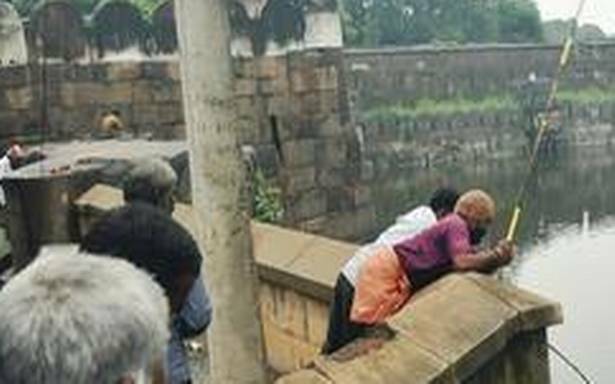 Two clogged outlets have kept the famous Jalakanteshwara temple in the Vellore Fort waterlogged for a week, forcing devotees to wade through knee-deep water.

Officials of the Archaeological Survey of India (ASI), Chennai Circle, and the temple have requested Collector P. Kumaravel Pandian to desilt the outlets. As a stopgap, they have suggested that the stagnant rainwater be pumped out.

“The inlets and outlets in the temple were the ancient structures. The heavy rain and the discharge of excess water into the Palar have caused waterlogging in the temple,” said S. Suresh Kumar, secretary, Sri Jalakanteshwara Temple Welfare Society.

The temple has been flooded for the first time since 1995 mainly because the moat reached its capacity last week with a quantum of excess water diverted to it from the Palar. As the moat is full, rainwater had no place to drain from the temple.

Along with the mosque and the parapet wall of the Fort, the 16th century Shiva temple is a protected monument in the Fort complex, which has 58 colonial buildings. After a decade, the temple was restored to its original splendour a month ago by a 25-member team of conservationists that cut out vegetation and scrapped fungus. The vegetation had caused granite pillars and walls to develop cracks and fungus had disfigured the sculptures.

The temple, built during the reign of Vijayanagara king Sadasivadeva Maharaya (1540-1572 CE), has large wooden gates, sculptures, carved granite pillars and towers, typical of the 16th century architecture in the Arcot region. The Fort complex was taken over by the ASI in 1921.