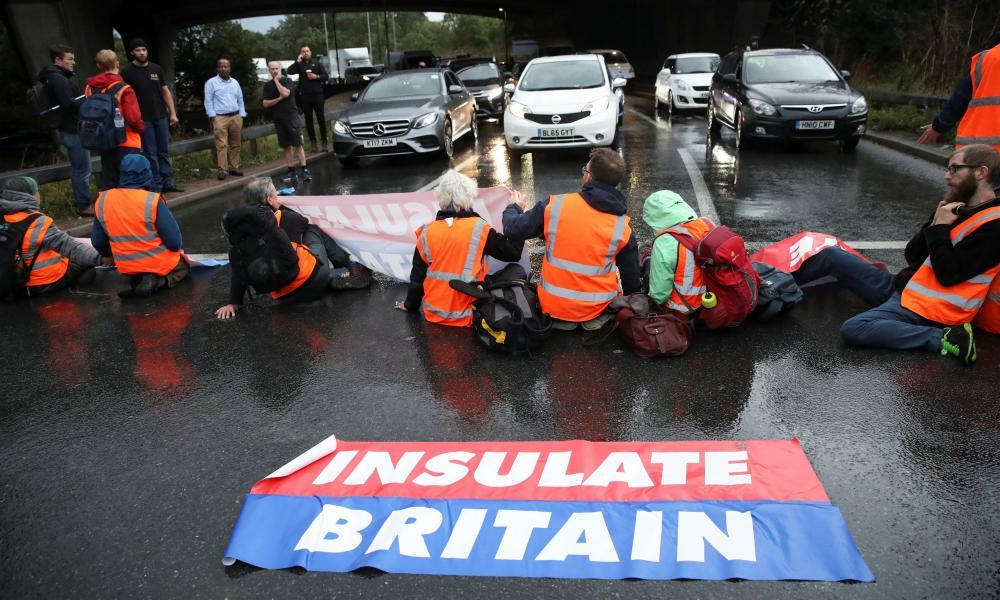 Climate change protesters “crossed the line” between their right to protest and their responsibility towards the rest of the public when they caused huge tailbacks by blocking three key London roads on Monday, the policing minister, Kit Malthouse, has said.

New measures will be announced to crack down on protesters who target road networks and critical national infrastructure, which “is of a different scale of damage than you would otherwise find with a normal protest”, the junior minister said.

On Monday, 54 members of Insulate Britain staged blockades at Hanger Lane, Wandsworth Bridge and the Blackwall tunnel at the height of rush-hour. On LBC radio on Tuesday morning, Boris Johnson called the group “irresponsible crusties”.

Malthouse, speaking on Sky News, said: “While we obviously all value the right to protest, there is a difference between causing disruption and causing damage. We believe that these protesters and some of the others that we’ve seen in the last couple of years have crossed the line between exercising their right but also their responsibility towards the rest of us, and something needs to be done.

“So today we’re going to be announcing a raft of new measures alongside those that are already in the police, crime, sentencing and courts bill that’s going through the House of Lords at the moment that we think will help deal with this problem, specifically recognising the disruption of infrastructure and disruption of the strategic road network is of a different scale of damage than you would otherwise find with a normal protest.”

In recent weeks, the home secretary, Priti Patel, has applied for court injunctions to stop Insulate Britain campaigners from bringing motorways to a standstill. The current fines for blocking a highway are up to £1,000.

However, breaching such an injunction is not in itself an arrestable offence.

At the high court on Tuesday, a return hearing for two emergency injunctions, banning Insulate Britain from blocking the M25 and around Dover, was adjourned for a week so they could be heard together with a third injunction.

But the judge refused an application by David Elvin QC, acting for National Highways, to allow serving of injunctions on a list published online and emailed to Insulate Britain. “This is an order which potentially leads to contempt proceedings,” Mr Justice Lavender said, adding that documents could be served to individuals by post.

Outside, a dozen or so members of Insulate Britain held banners and spoke to journalists. Some said they had been targeted with threats as a result of their activism. “I’m getting death threats and my name and address published on Twitter,” said Liam Lawton, 36, from London.

Tim Speers, also 36 and from London, said: “My name and address is on this injunction. I had someone personally message me the other day saying he’s going to find me and beat me up. It’s dangerous, their releasing this information.”

When asked on Sky why high court injunctions were not enough to bring an end to the protests, Malthouse said the “consequences step” had to follow a number of other legal steps, giving protesters a “legal loophole”.

“In the meantime, while the police can arrest these protesters and charge them for obstructing the highway, the charge at the moment isn’t severe enough that they can be detained in custody pending an appearance in court. That means that these people in particular are then free to go repeat offend, as we’ve seen.

“Eventually, given that they are as far as I can see in breach of that injunction, they will appear in front of a judge and face the wrath of that judge, but in the meantime we need to think about this particular legal loophole to give police more power to deal with this very severe disruption.”

At the Conservative party conference in Manchester, Patel was greeted with applause as she vowed to “close down the legal loopholes” exploited by “the so-called eco warriors trampling over our way of life and draining police resources”.

“Their actions over recent weeks have amounted to some of the most self-defeating environmental protests that this country has ever seen,” she said, in an apparent reference to Insulate Britain.

Penalties for blocking motorways will be increased, a new offence of interfering with key national infrastructure will be created, and courts will be given new powers to stop a “small minority of offenders” from travelling to protests, Patel said.