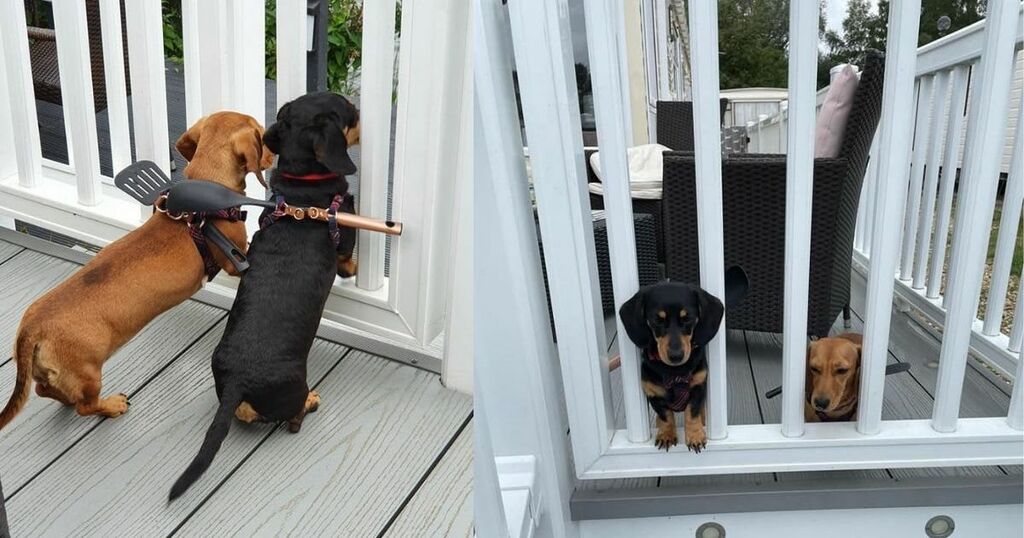 A mischievous Dachshund duo caused trouble on their holidays after they escaped through their caravan’s patio fence.

After Maple and Dottie slipped through the gaps to follow a family walking another dog, their owner had to think quickly for a solution to stop them from getting out again.

She had to forage through the cutlery drawer to find something suitable to use as a wedge – and surprisingly found a spoon and spatula worked brilliantly.

The pair were on holiday with owner Helen and her two children at Tattershall Lakes, Lincolnshire, where the Dachshunds enjoyed watching dog walkers and ducks pass by their gates.

But Helen never thought that the pair would attempt such an escape as Maple, one, has broad shoulders and Dottie, three, is quite timid and not a leader.

Helen said: “Maple gets up to everything but Dottie doesn’t normally, but it was Dottie who escaped to follow a family walking a dog, then Maple squeezed through after her to follow.

“We never expected them to go off following another dog down the road. In the end we had my son and my daughter out there trying to catch them.

“Maple came back to my daughter but Dottie just carried on running. Every time my daughter ran one way she would run the other way.”

Helen had already attached a blanket over one end of the gate but this wasn’t enough to stop them from disappearing.

She tried to wedge the cooking utensils through their jumpers but that didn’t work either.

In the end, Helen managed to thread them perfectly through their harnesses which proved to be good entertainment for the family.

“Dottie kept trying to turn around because she thought there was food on the spoon which was comical”, Helen added.

"And every time she shook herself, she sounded like a one piece marching band, because the spoon would hit her jacket and the fence.

“But at least it stopped them from getting back out again.”

When Helen shared her inspired hack in a Facebook group, users loved the “genius” idea.

Even though it started as a last-minute holiday hack to stop the dogs from disappearing, it may have started a trend for other dog owners to use.