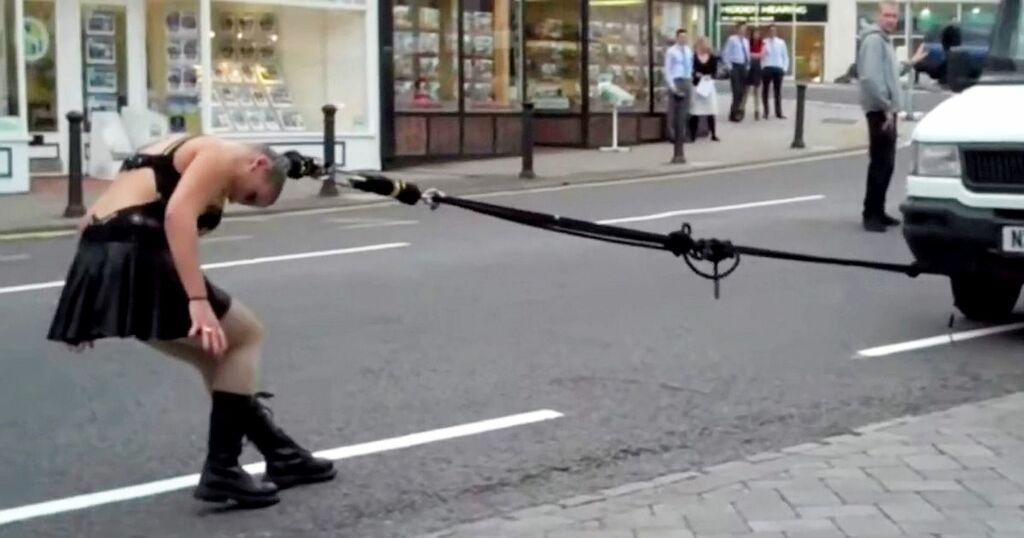 A circus performer pulled her van to a petrol station with her hair amid the fuel crisis.

Circus of Horror's star Anastasia Sawicka, 34, feared she would be unable to tour when her four-tonne LDV van began running low on fuel.

The former Britain's Got Talent finalist decided to get her van to the nearest petrol station by pulling it there with her hair.

Puzzled onlookers were left stunned on October 4 as Anastasia hauled her vehicle along a central London street.

Pedestrians and passengers who were waiting for a bus can be seen gobsmacked at the feat.

Anastasia, who is recognised by Guinness World Records as having the world's strongest hair, said: "Pulling the van with my hair looked daunting but as they say 'the show must go on'.

"It was a case of swapping a few follicles for fuel and you'll never get a greener way to get around than this."

Anastasia, or Anastasia IV as she is known on stage, usually uses the van to travel to perform for crowds as a "hair hanging aerialist".

This time, she decided to take matters into her own hands when her fuel gauge dropped into the red.

Amazing footage shows how Anastasia tied a special harness to the front bumper of the van and was able to yank it down the road using her hair in order to refill.

She has now joined up with the rest of the performers at Tullys Shocotober Fest which is being held in Crawley, West Sussex, until November 6.

Anastasia gave up studying biochemistry to join the circus and has spent years perfecting the ancient art of "hair hanging" - a skill originally from China.

She needs two bottles of conditioner a day to keep her super-strong barnet in tip-top condition and even has it insured for £1million.

Polish-born Anastasia, who lives in Northampton, added: "I use loads of conditioner and hair vitamins.

"To be suspended by your hair feels exactly how it looks. It is definitely not pleasant and can be painful at times.

"But it also feels fantastic. It is the closest you can get to actually flying as you are lifted by your head.

"You are absolutely free and you are not holding on to anything. It's exciting."

The Circus of Horrors is also performing at Blackpool Pleasure Beach between October 27-31 before embarking on a nationwide tour.