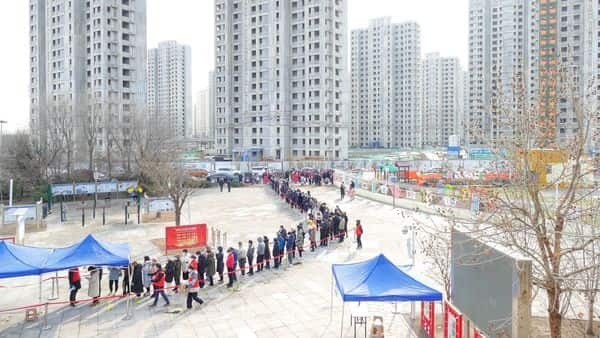 China saw its first omicron cases in the community, igniting a mass testing blitz in the northern city of Tianjin as the country strives to maintain its zero-tolerance approach to Covid in the face of more transmissible variants.

The two cases in the port city were confirmed as being omicron by the Chinese Center for Disease Control and Prevention, after its local branch completed the genome sequencing, CCTV reported. The infections were from the same transmission chain but officials have yet to establish if the strain is the same as imported omicron cases reported earlier in Tianjin, according to the report.

China’s commitment to its Covid Zero policy has seen it restrict movements and implement mass testing and other measures in cities spread across the country. Further outbreaks raise the risk of new lockdown measures that could disrupt production and shipping in an economy already battling weak consumption and a property market slump.

Tianjin first reported the two cases late Saturday and neither of the people, one of whom is a child, have traveled outside of the city in the past 14 days. The government announced that it will start mass testing from 7 a.m. Sunday, in order to “effectively prevent the further spread of the omicron variant," state news agency Xinhua reported.

China, which is set to host the Winter Olympics in Beijing next month, has been determined to maintain Covid Zero even as cases spread and other countries adopt policies of living with the virus. The recent flareups, while small compared to international cases, are fueling the most protracted stretch of infections in China since the virus first emerged in Wuhan two years ago.

The southern technology hub of Shenzhen is discouraging people from leaving after reporting two infections, the eastern metropolis of Zhengzhou required all residents to be tested and Xi’an in the northwest has confined most of its population of 13 million to their homes since before Christmas. Tianjin Municipal Transportation Commission issued a ban on inter-provincial bus services from Sunday, according to local media reports.

While cases have continued to crop up, until the weekend China hadn’t seen local transmission of the omicron variant.