By Martin Farrer and agencies 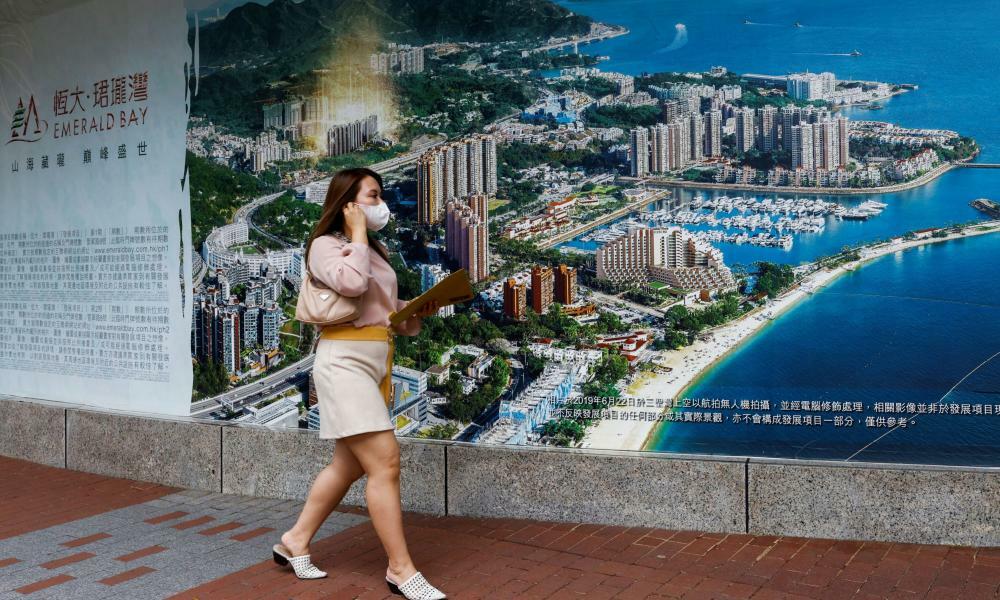 Shares in the embattled Chinese property giant Evergrande have slumped again after two credit downgrades in as many days amid concerns that it will default on parts of its massive $300bn debt pile.

Evergrande, which is one of the world’s most indebted companies, has seen its shares tumble 75% this year. They fell by almost 10% on Thursday morning before recovering on reports that the authorities may allow the company to reset its debt terms.

Trading in one of the company’s bonds was suspended by the Shenzhen stock exchange after the price dropped 20%. After resuming trade, Evergrande’s January 2023 bond fell more than 30%, triggering a second trading freeze.

The online market trading platform IG said Evergrande posed “a risk of contagion” after Bloomberg reported that Credit Suisse and Citibank were no longer accepting the bonds of another highly indebted Chinese property developer, Fantasia, as collateral.

There were also reports from China on Wednesday of employees protesting outside the company’s offices about salaries not being paid. Evergrande claims to employ 200,000 people and indirectly generate 3.8 million jobs in China.

The company has run up liabilities totalling more than $300bn, after years of borrowing to fund rapid growth and a string of real estate acquisitions as well as other assets including a Chinese football team.

But the firm has struggled to service its debts and a crackdown on the property sector by Beijing has made it even harder to raise cash, fuelling concerns it will go bankrupt.

The value of new home sales has fallen 20% in China since the peak in the first three months of this year, and the value of land sales are also sharply down. Along with Beijing’s tougher regulation, these factors have made it much harder for Evergrande to dispose of unsold properties even with huge discounts.

Investors questioned how Evergrande was going to dispose of assets in order to repay debts without a clear plan.

“There is a lack of confidence and lots of rumours, the key is that we still don’t see a clear [debt resolution] plan,” a stock exchange trader told Reuters.

On Tuesday, a stock exchange filing showed that Evergrande had outstanding liabilities worth 562m yuan ($87m) to a supplier called Skshu Paint and repaid some of the money in the form of apartments in three unfinished property projects.

Xi Jinping, China’s president, has targeted “unsustainable” economic growth in recent months, along with his drive against the country’s increasingly powerful tech billionaires. The assault intensified on Thursday, after Chinese authorities told gaming firms to curb “incorrect tendencies” such as focusing “only on money” and “only on traffic”, sending the Hong Kong stock market down 2.3%, its biggest one-day percentage drop since July.

But whether the president would allow Evergrande to go bust if it fails to meet key repayment deadlines on 21 September remains unclear.

Many analysts warn such an event could have a serious impact on the world’s number two economy because the firm would go under, leaving hundreds of firms out of pocket.

Evergrande is China’s second biggest property developer and has interests in hundreds of cities, specialising in the vast apartment complexes that have sprung up across China in the past 25 years.

Its debts to all manner of companies throughout China means that any default could trigger a knock-on effect for the country’s real estate sector, which has been pumped up by ultra-cheap money since the global financial crisis in 2008-09. Investors fear that if Evergrande is allowed to go under, indebted rivals such as Fantasia could quickly follow.

Those worries were increased on Wednesday when Fitch cut its rating on Evergrande to CC, reflecting its view that “a default of some kind appears probable”.

The move came a day after Moody’s slashed its rating, indicating it is “likely in, or very near, default”, while Goldman Sachs has cut the stock from neutral to sell.

Last week, the group said its total liabilities had swelled to 1.97tn yuan ($305bn) and warned of risks of defaults on borrowings.

It issued a profit warning at the end of August in which it admitted that it could default on debt payments. The warning came days after Xu Jiayin, the billionaire founder of Evergrande Group and the third richest person in China, resigned as chairman of its real estate arm.

In the latest indication of the company’s funding challenges, financial information provider REDD reported on Wednesday that the company would suspend interest payments due on loans to two banks on 21 September.

James Laurenceson, director of the Australia-China Relations Institute, said Evergrande could be forced into a fire sale but cautioned that the sheer size of the business meant that the situation might not be as dire as some imagined.

“It’s always important when talking about debts to remember that the company also has assets. When you compare the two, the scale of the risk and the possibility of things spinning out of control are moderated.

“I’d be surprised if Xi allows a full-scale bailout, but you have to see it in the context of a $14tn economy.”