China Imposes Restrictions as Delta Reaches Nearly Half the Country

China imposed new restrictions on travel in a bid to slow a delta-driven outbreak that’s grown to more than 500 cases scattered across half the country, as the government stuck to an aggressive containment playbook rather than rely on its high vaccination rate.

Public transport and taxi services were curtailed in 144 of the worst-hit areas nationwide, while officials curbed train service and subway usage in Beijing, where three new cases were reported Wednesday. Hong Kong re-imposed quarantine on travelers from the mainland, though an exception remained for the southern Guangdong province which neighbors the financial city.

Officials reported 94 new local infections on Thursday, including 32 that were asymptomatic, adding to the country’s broadest Covid-19 threat since the pathogen first emerged in Wuhan in late 2019. Though 61% of the population has been vaccinated, one of the highest rates among the world’s biggest countries, China has stuck to its tried-and-true approach of mass testing and targeted lockdowns that’s crushed over 30 previous flareups.

While case numbers are still too low to be a test of whether China’s homegrown vaccines successfully prevent serious illness and death from the delta strain, the government is unwilling to take the chance.

The capital city of Beijing, where officials have worked diligently to keep the pathogen out, halted the use of community spaces for entertainment, limited the number of visitors allowed at parks and scenic areas and implemented a two week quarantine for visitors from high-risk areas. Local officials, meanwhile, are exhorting the population to endure the disruption.

“Vaccination is not equal to entering a safe or carrying a talisman,” said Qi Jinli, the deputy director of Beijing’s Covid-19 response taskforce on Wednesday. “Personal protective measures still cannot be relaxed and vaccination cannot replace containment measures. Let’s hold on until we score the ultimate victory against the outbreak.”

China’s uncompromising approach is increasingly an outlier as major western economies turn to vaccination to keep hospitalizations and fatalities low amid resurgent outbreaks. Even other places that have stamped out the virus, like Singapore, say they are pivoting to treating Covid-19 as a persistent, endemic condition.

The Chinese vaccine-makers have not released data from broad-based studies on how well their shots perform against the delta strain, but experts say their effectiveness -- already lower than the western messenger RNA vaccines -- will be even less potent against the highly infectious variant.

“The problem for China is that its vaccines are likely to lose more effectiveness against the delta variant,” said Sam Fazeli, an analyst at Bloomberg Intelligence. “This means that to contain the delta variant, China would have to use more lockdowns, which will have broader economic consequences.”

In just two weeks, confirmed cases -- people infected and sickened by the virus -- have grown to more than 500. The infections can be traced back to three clusters in China: an outbreak among airport cleaning staff in the eastern city Nanjing, another at a hospital treating Covid patients in Zhengzhou and sporadic cases detected in Yunnan, the province bordering Myanmar.

Delta has spread to Wuhan, which has been virus-free since China contained the initial outbreak there early last year. The city has detected 12 cases as of Aug. 3 and is currently testing its entire population of 12 million people.

Chinese authorities urged people to cancel business trips and vacations, while some colleges around the country have asked students, especially those from high-risk areas, to delay their return to school for the new semester. 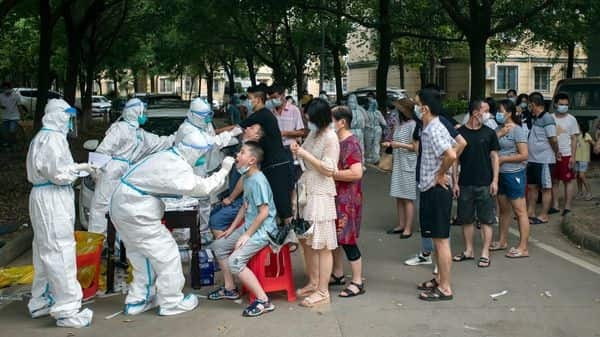 China imposes restrictions as delta virus reaches nearly half the country
Public transport and taxi services were curtailed in 144 of the worst-hit areas nationwide, while officials curbed train service and…

Livemint
One subscription that gives you access to news from hundreds of sites
US Covid cases hit six-month high, Delta variant swarms nearly half of China

The US is reporting more than 94,819 Covid-19 cases on a seven-day average, a five-fold increase in less than a…