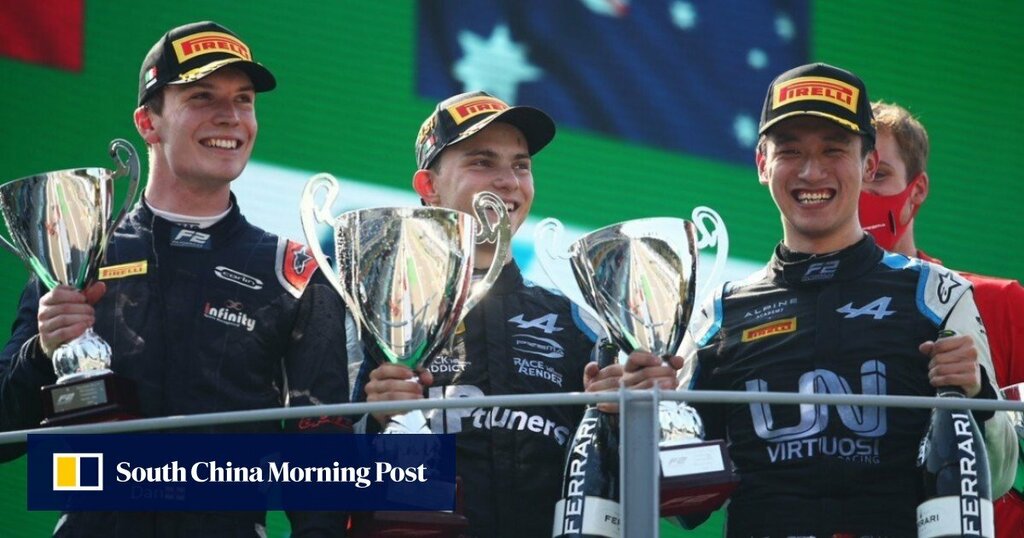 Zhou, who has been linked with the vacant F1 drivers seat at Alfa Romeo next season, finished second in two of the three races at the Monza circuit over the weekend.

The Shanghai-born racer remains second in the standings with 134 points, now 15 behind the Australian rookie who held on to pole position on Sunday.

Prema-driver Piastra extended his lead from five points going into the weekend thanks to victory in Sunday’s feature race, his first of the season, after holding off the challenge of Zhou in second.

Zhou had started third on the grid but got the better of Indian driver Jehan Daruvala to try to repeat his performance in Silverstone last time out, where he overtook Piastri who had started on pole.

“Leading the championship is good, extending the lead is even better. I really wanted to get a feature race win on the board, that was the one thing I was missing this year so far,” Piastri said after the race. “I like to think I’m ticking a few boxes.”

UNI-Virtuosi driverZhou was far from downbeat after the Sunday race after keeping in touch with Piastri over the weekend.

“That’s exactly what we wanted. From the second race in Baku we had a string of four zero-point races which hurt a lot in the rankings but we bounced back with the Feature Race in Silverstone and we’ve kept the momentum here in Monza.

“I’m pretty happy with what we achieved this weekend and I think for sure as a team we need to be more consistent, because Prema this year seems to be the most consistent team out there. We’ll push hard and try to gain some points back in the future.

Elbows were very much out in the Feature Race! #ItalianGP #F2 pic.twitter.com/KPeqBg12Wr

Saturday’s first sprint race saw Zhou make up ground as he finished second from eighth on the grid though he could not quite match the exploits of third-place finisher Christian Lundgaard who had started in 19th. Theo Pouchaire finished first, while Piastri finished fourth.

In the second sprint race, which sees the top 10 finishers from the first race reversed, Piastri outperformed Zhou with a seventh-place finish to the China driver’s eighth. That added three more points to the lead for the Australian Prema driver, extending it to eight points.

Zhou had led the driver’s championship until the previous Grand Prix at Silverstone, where he finished outside the points for a third race in a row and Piastri leapfrogged him in the standings to carry a five-point lead into the summer break, despite Zhou winning the Sunday race.

Podium number six of 2021 for this man

Monza marked the return of racing for the second half of the season and while Zhou has more ground to make up now, there is a bigger goal – a Formula 1 seat.

Zhou would become the first Chinese driver at the apex of motorsport and there are reports of a US$30 million sponsorship package for the manufacturer willing to offer him a drive.

He has been linked with Alfa Romeo, with team principal Frederic Vasseur admitting that the Chinese driver is one of a number that they are considering.

Here's how things stand after rounds!
@OscarPiastri's Feature Race win sees him leave Italy with a larger championship lead than he arrived with
#ItalianGP #F2 pic.twitter.com/VJdTCtlPw0

“Zhou is doing a good job in F2,” Vasseur told media at Monza in the week. “For sure he’s on the list.

“It’s not only due to the fact that he’s Chinese, but that he’s a front runner in F2, he won some races and I think every single team in the F1 is looking after him.”

The next round of Formula 2 is in Sochi later this month before a break until December.