Bhupesh Baghel not allowed to step outside Lucknow airport 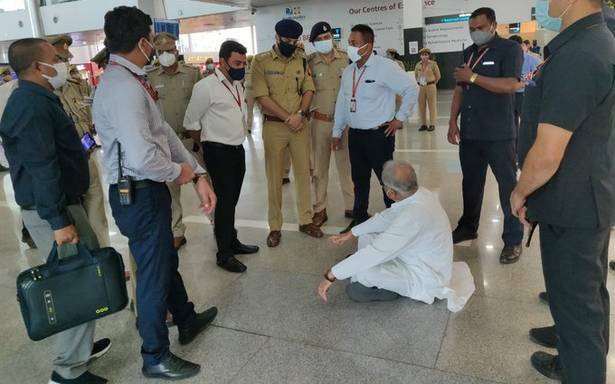 Chattisgarh Chief Minister Bhupesh Baghel staged a protest at the Lucknow airport after the authorities refused to allow him into the city.

Addressing a press conference, sitting cross-legged on the airport terminal floor, Mr. Baghel said Prime Minister Narendra Modi’s anti-farmer sentiment stood exposed as, in a 36-minute address to a function in Lucknow, he (the PM)didn’t even utter a word on the happenings in Lakhimpur Kheri.

Mr. Bhagel stated that as he and his staff landed in Lucknow in the afternoon by a commercial plane, they were asked to deplane before others. They were put on an airport bus and taken to the terminal, where he was told that he cannot leave the terminal building. “I told them that I am not headed to Lakhimpur Kheri, where things are still tense and I wanted to go to Sitapur where my leader Priyanka Gandhi Vadra has been detained and I want to meet Congress leaders in Lucknow. But they blankly refused.”

Following an argument with security officers, Mr. Baghel sat on the floor in protest. He was told that Section 144 is in place in Lucknow too and, therefore, he was debarred from entering the city.

“I asked them if Section 144 is in place, how was the Prime Minister Narendra Modi allowed to hold a function here. The police officers had no reply to this question,” he noted.

Mr. Modi was inaugurating an urban planning conference. Even after he left Lucknow, Mr. Baghel was not allowed to leave the airport terminal building.

‘Supporter of the British’

It was unfortunate that on the one hand, India was marking 75th year of Independence with an ‘extravagant’ Amrit Mahotsav, while on the other, BJP leaders, drunk on power, are mowing down farmers and getting away with it, he alleged.

Criticising the U.P. Government for detaining Ms. Vadra and not allowing the Opposition to visit the Lakhimpur Kheri site, he observed that this belied their deep-seated fear. “I never took Yogi Adityanath to be a coward, but it is now clear that he is stalling the Opposition only in the of his impending defeat in the coming elections,” he added.