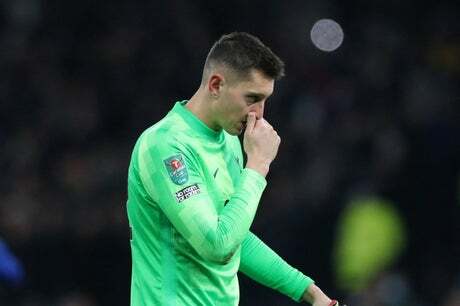 As Chelsea strolled into the Carabao Cup final, it was their supporters singing Antonio Conte's name at the Tottenham Hotspur Stadium.

Perhaps the away end had more reason than usual to celebrate the last manager to win them the title after Conte's decisions helped ease Chelsea's passage to Wembley.

The Spurs head coach made a surprising misstep with the selection of back-up goalkeeper Pierluigi Gollini ahead of captain Hugo Lloris, with the Italian at fault for Antonio Rudiger's winning goal, which made it 3-0 on aggregate and effectively killed the semi-final tie 18 minutes into last night's second leg.

Conte defended Gollini's selection, insisting Lloris needed a rest ahead of three big league games and that Gollini deserves to be the club's cup goalkeeper, while pointedly suggesting he had "much more important" problems to worry about.

But given the significance of the occasion, it may be hard for supporters to forget the decision in a hurry. Think Mauricio Pochettino playing Heung-min Son at wing-back in the FA Cup semi-final defeat to Chelsea in 2017.

One possible, if conspiratorial, explanation is that Conte used his team selection to make a political point to the Spurs hierarchy about his squad's strength in the wake of Monday's meeting with Daniel Levy and Fabio Paratici over transfers.

If this was part of Conte's intention, he proved his point after Gollini rushed off his line to claim Mason Mount's corner but missed the ball, which rebounded off Rudiger and into the net.

With the transfer window currently open, and Conte having placed the emphasis firmly on Spurs chairman Levy and managing director Paratici to act, the bigger picture is that Tottenham's summer signings look increasingly underwhelming.

Last night was not the first time Gollini has failed to convince and there has been little to suggest the Atalanta loanee is a potential long-term successor to Lloris.

Emerson Royal was also disappointing again, and it is telling that Conte has made a new right wing-back a priority this month – Adama Traore is a target – despite Spurs spending more than £25million on the Brazilian in August.

To accommodate Emerson, the club even paid off Serge Aurier's contract and although the Ivorian was considered a disruptive influence, he would surely have been a greater asset in Conte's system than his replacement.

Bryan Gil is promising but raw, and you wonder how much the 20-year-old Spaniard is gaining from playing out of position – like in Saturday's FA Cup win over Morecambe – or being introduced in hopeless situations, as he was in both legs against Chelsea.

Cristian Romero, who has returned to group training, at least looks an astute signing, although a serious hamstring injury has so far restricted him to seven league appearances.

Overall, Paratici's summer business, while lowering the age profile of the squad, has so far done nothing to improve the level of Tottenham's first team.

And this, really, is the crux of the club's many problems, and the reason for the gaping chasm in quality to Chelsea.

Spurs have an experienced administrator in Paratici, and a world-class manager, stadium and training ground, but if they continue to sign mediocre players, who do not obviously improve their first XI, it will be impossible to return to the top.

While Conte's misstep over Gollini can be excused, the club cannot afford to keep making poor choices in the transfer market.