Charlo, who fought to a controversial draw against Castano last year, battered the South American into submission in the 10th round of a classic battle in Los Angeles.

The 31-year-old Charlo sent Castano to the canvas twice in the 10th round just as he had begun to get on top of a hard-fought battle that saw the two men share the opening rounds.

A crunching right hook to the body stunned Castano and Charlo followed with a left hook to the head that sent the previously undefeated Argentinian crumpling to the canvas.

With Castano unsteady on his feet, Charlo moved in for the kill.

A powerful left jerked Castano's head back violently and another punishing left to the body sent him to the deck for the final time.

"This is unbelievable," Charlo said."I gave it my all and that was the end result of it.This was nerve-wracking.It felt like my first fight, where you get nervous.I had ants in my pants.

"I knew Castano was going to give it his all, and I trained very hard.I was in great shape," added Charlo, who improves to 35-1-1 (19 knockouts).

Charlo's win elevates him to an exclusive club of fighters.He is only the seventh boxer to hold all four belts from the major sanctioning bodies -- WBC, WBA, IBF and WBO –- at the same time.

On Saturday, it looked as if both men were unwilling to risk leaving it to the judge's cards again in a fight that erupted from the opening bell.

Both boxers landed heavy shots in the first six rounds, with very little to choose between either man.

But Castano appeared to tire noticeably in the seventh round, and Charlo's crisper punches began to take their toll.

"I listened to my corner this time," Charlo said."I saw that he was wearing down a little bit and I was breaking him down.I just saw my punches being more effective."

Charlo repeatedly landed solid shots in the eighth and ninth, but Castano was never totally out of contention, still causing problems with his stinging right hand.

The end came quickly in the 10th, however, after Castano was knocked to the floor with a brutal Charlo combination.

The Argentine did well to get back to his feet but was unable to respond when Charlo unleashed a final combination that sent him to the canvas once more.

"I was pretty sure he was going to get back up because it was only the first knockdown -- but I knew it was over,” Charlo said afterward.

"Everything that happened in the ring tonight, we showed that we are warriors," he said."That’s the main thing.We have to feed our families.

"We both were fighting back-and-forth.It was power back-and-forth and then his right hand came over and stopped the fight.He's a champion.He hit me.He got me.But I'm okay." 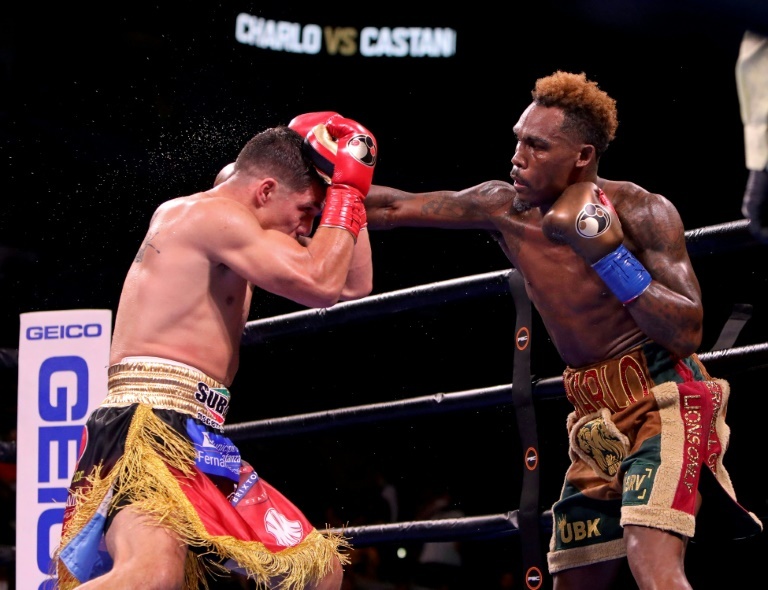