‘Centre looking into charges against KCR’ 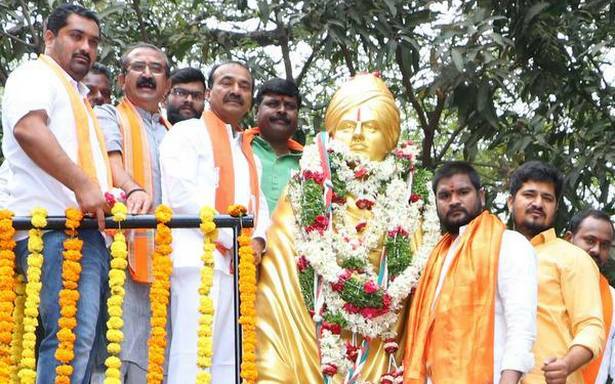 The Centre is getting ready to take action against Chief Minister K. Chandrasekhar Rao’s corruption and he may land in trouble anytime, claimed Telangana BJP president and MP Bandi Sanjay Kumar on Wednesday.“The Centre is serious about his corruption and hence, he has been resorting to new tactics of exploring a political front,” Mr. Sanjay said at a meeting held in BJP office here to celebrate the birth anniversary of Swami Vivekananda.The Chief Minister’s meeting with Rashtriya Janata Dal (RJD) leader Tejashwi Yadav is yet another ‘eyewash’ to divert the people’s attention from the current agitation against the mass transfer of employees. . Mr. Rao and former Bihar Chief Minister Lalu Prasad Yadav shared a common platform of corruption, he chargedThe meetings with the Left parties and now the RJD leaders is meant to gain ‘sympathy’, he said and reminded that Mr. Lalu Prasad Yadav also went to jail for his corruption.. Mr. Sanjay Kumar said the Telangana youth should take inspiration from the life of Swami Vivekananda and strive for a ‘second stir’ to realise the ideals for which the separate State was formed. Youth are a disappointed lot because of lack of job notifications and the current regime has been functioning against interests of the TS, he maintained.In a separate press conference, senior leader P. Muralidhar Rao charged the Punjab government and the Congress party of spreading canards about Prime Minister Narendra Modi convoy getting stranded on the flyover instead of accepting the ‘security lapses’. Earlier in the day, the BC morcha held a human chain on the Tank Bund to highlight the same issue.