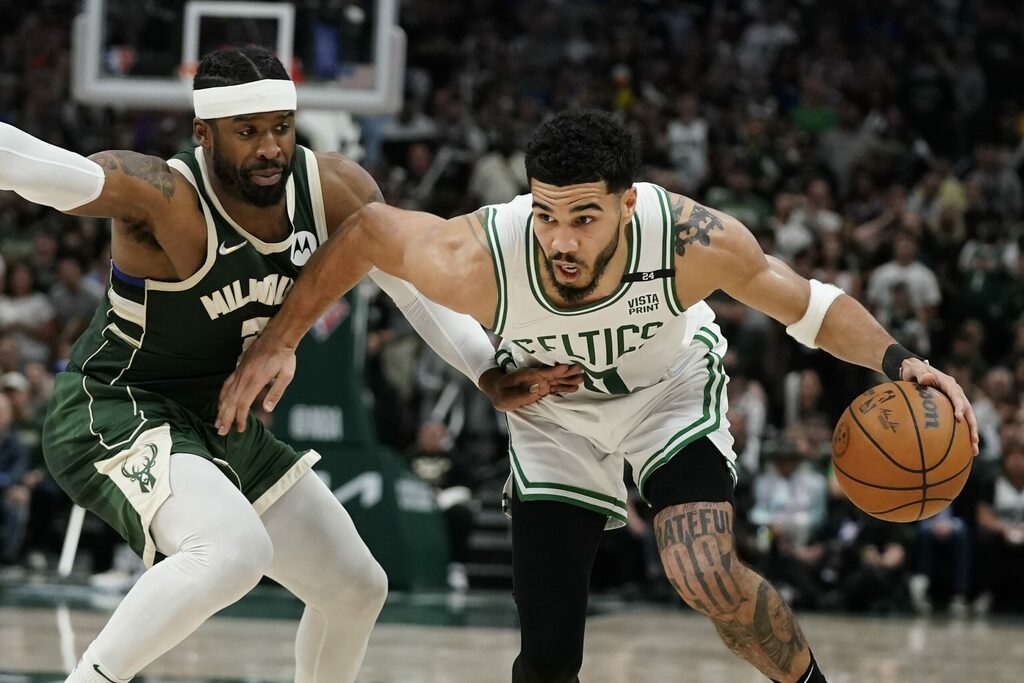 Some of the best plays of the season-saving win captured in images.

USA Today Sports Media Group
Jayson Tatum had his superstar moment with 46-point masterclass to save Celtics season vs. Bucks

USA Today Sports Media Group
One subscription that gives you access to news from hundreds of sites
Celtics smash defending champion Bucks 109-81 in Game 7, reach Eastern Conference Finals
BOSTON — Over seven games, 15 nights and 336 minutes, the Bucks tried to frame their second-round series with the…

Things seemed to get a little heated between the two former Duke teammates.

MILWAUKEE — Jayson Tatum watched his season slip to the brink Wednesday, first standing in a crowded left corner and then alone on the right wing, as the Celtics’ final possessions imploded without him.

On Friday night, Tatum took Boston’s fate into his hands and willed and scored his way to a Game 7.

Tatum poured in 46 points and never allowed Boston to trail over the last three quarters of a 108-95 win in an elimination Game 6 at Fiserv Forum. Tatum outdueled Bucks star Giannis Antetokounmpo, who paired his 44 points with 20 rebounds and threatened to erase a sizable deficit in the fourth quarter, just as he had in Game 5. Instead, Tatum answered with four straight baskets to push the Celtics ahead by eight with 5:40 left, and they led comfortably the rest of the way.

“Huge night by (Tatum),” Celtics coach Ime Udoka said. “Other guys as well, but (that was) definitely needed.”

Jaylen Brown pocketed 22 points and Marcus Smart scored 21, both playing more than 40 minutes. Bucks guards Jrue Holiday (17 points) and Pat Connaughton (14) were the only other players to finish in double figures for Milwaukee.

The Celtics dictated terms early with a small lineup that effectively shelved Bucks center Brook Lopez for most of the night. Free to roam the half court, Boston returned to the slash-and-kick offense that whirred in Milwaukee days earlier and pulled out a Game 4 win. Despite their lack of size, the Celtics remained competitive on the boards, yielding just seven offensive rebounds and grabbing eight of their own.

The C’s also finished 17 of 43 from 3-point range, where they launched almost half their shots, and held their hosts to 24% shooting.

With Tatum sitting to start the fourth quarter, the Bucks nearly vaporized a 13-point deficit within three minutes. Antetokounmpo even cashed a rare 3-pointer to claw back to 85-81 near nine minutes remaining. Then Tatum, who had rested just 90 seconds before the fourth, went off.

He hit Milwaukee with a right corner jumper, two left-wing 3s and a spinning fadeaway from the left elbow over the next four possessions. After a needed timeout, Brown took up the heavy-lifting with a 3-pointer of his own, and Smart drilled a long-rage jumper in Antetokounmpo’s eye for a 100-87 lead at 4:20 to go.

The Celtics cruised from there, tip-toeing around the pitfalls of slow-starting possessions and isolation offense that dogged them in Game 5. Their shooting touch never left them.

They staked an immediate lead by firing nine straight 3-pointers after tip-off, a sharpshooting display Antetokounmpo countered by pounding his way to 10 early points and two early fouls on Grant Williams. Milwaukee claimed its first edge at 20-17 on a transition 3 from Holiday, who followed Antetokounmpo’s first triple. Minutes later, after five straight points from Smart, Tatum stepped into an above-the-break 3 that lifted the Celtics to a 28-26 advantage after the first quarter.

Immediately washing the taste of Game 5 out of his mouth, Smart scored 14 in the first frame alone.

Tatum’s hot shooting and playmaking paved the way for a 15-4 Boston run that extended midway into the second. Then, as Tatum cooled, the Bucks made up ground with another Holiday 3 and Antetokounmpo flushing a transition dunk over Smart. The score even survived a coach’s challenge, and leading 42-35, he threw down a thunderous slam over a late-arriving Williams.

But the Bucks’ thunder faded quickly.

Derrick White drew Antetokounmpo’s third foul inside the final minute, then canned two foul shots to give himself nine points to show for a terrific first half. Having limited every Milwaukee player outside of Antetokounmpo and Holiday to 10 combined points, the Celtics carried a 53-43 lead into the locker room.

Boston’s edge grew to a game-high 18 points midway through the third quarter, when a fourth foul on Antetokounmpo curbed some of his ferocious drives. Meanwhile, Tatum led a balanced scoring effort that would eventually buy him enough time and cushion to bury the Bucks and return home with a win.

Some of the best plays of the season-saving win captured in images.

USA Today Sports Media Group
Jayson Tatum had his superstar moment with 46-point masterclass to save Celtics season vs. Bucks

USA Today Sports Media Group
One subscription that gives you access to news from hundreds of sites
Celtics smash defending champion Bucks 109-81 in Game 7, reach Eastern Conference Finals
BOSTON — Over seven games, 15 nights and 336 minutes, the Bucks tried to frame their second-round series with the…

Things seemed to get a little heated between the two former Duke teammates.