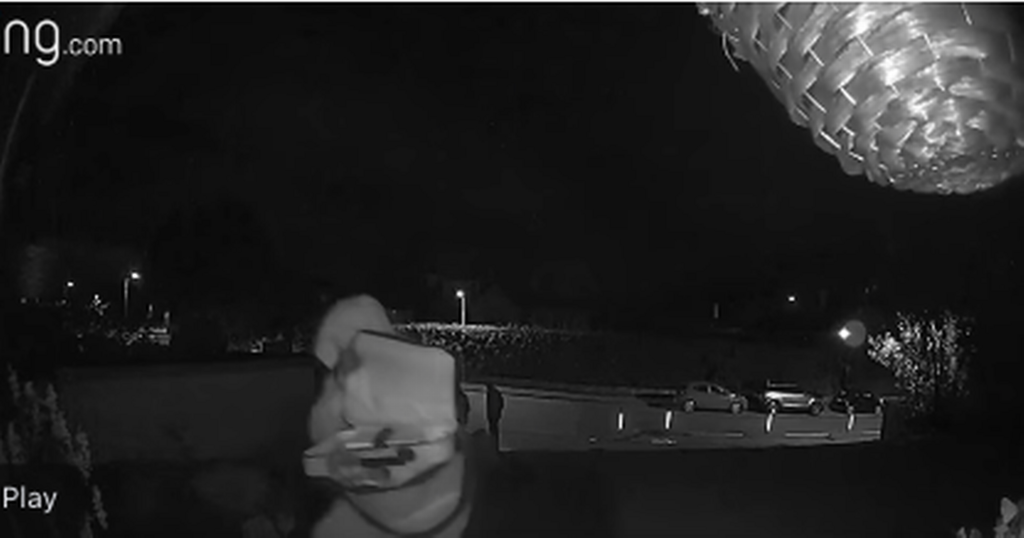 A second Edinburgh motorist has issued an urgent warning after CCTV footage captured a would-be car thief using a sophisticated device to try and steal her motor.

The woman, who asked to remain anonymous, shared the frightening footage of a hooded prowler outside her front door trying to pick up the signal to her car keys with a signal amplifying device.

The smart device works by tricking a vehicle into thinking the car key is in proximity as the high-tech software then remotely unlocks the vehicle so thieves can gain entry and turn the car on without a key.

Earlier we told how another woman in Edinburgh was thrown from the bonnet of her own car in front of her young son while two thieves nicked the motor.

The CCTV shows a man walking towards the property in the Barnton area of the city at 12.30am on Tuesday carrying a large device within a bag.

He reaches the front door and lifts the bag up, continuing to move it around in a bid to pick up a key signal.

A flashing light can be seen on the device.

Two accomplices can be spotted lurking next to a truck parked at the property.

The man appears to give up, and eventually all three flee the property.

Sharing a warning on social media, the woman said: "Our ring doorbell captured 3 guys at 12:30am on our doorstep/driveway evidently using a device to pick up car key signal from front of our house as well as at the truck itself.

"Had they been successful they'd have been off with our car.

"Police are aware and said these attempts are on the increase. You can wrap your fob key in foil to block the signal or purchase a case to do same. Ring Footage attached. Please be vigilant."

Police Scotland confirmed that there have been a number of car thefts involving the signal amplifying devices last month.

Detectives have urged people to buy a faraday box or pouch that can block the signal from being detected from outside a property.

Detective Inspector Karen Muirhead said: “I would urge all homeowners to consider what their current home security looks like and evaluate if it could be enhanced through the use of measures such as alarms, motion-activated lights and CCTV.

“For those with electric key fobs, please consider buying a faraday box or pouch, which blocks the signal from being detected and amplified to open and start your vehicle. At the very least, please do not leave keys near the door or entryway of your home.

“Following engagement with victims, we have established that many prefer to leave keys and valuables near doors so that in the event their homes are broken into, thieves do not venture further inside the property.

"In our experience, the likelihood of this occurring is extremely rare, with most criminals seeking an easy and quick grab, rather than having to search the entire house.

“We are treating all of these crimes with the utmost seriousness and would urge anyone with information that can assist our ongoing inquiries to contact police immediately.”

A Police Scotland spokesperson added: “We were made aware of a group of men acting suspiciously in the Barnton Avenue area of Edinburgh around 12.40am on Tuesday, 12 October.

“Officers attended and there was no trace of the men.

“Enquiries into the incident are ongoing.”