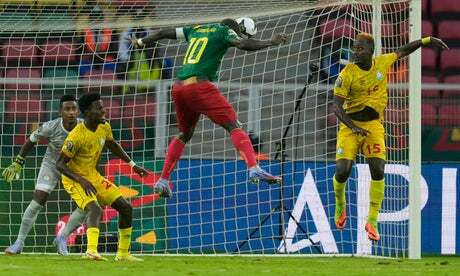 Vincent Aboubakar and Karl Toko Ekambi scored twice each as hosts Cameroon secured their place in the last 16 of the Africa Cup of Nations with a thumping 4-1 victory over Ethiopia.

It wasn’t the best of starts though for the hosts, as Ethiopia took a surprise early lead through Dawa Hottesa inside four minutes.

But for the second successive match, Cameroon roared back from behind as captain Aboubakar took his tally for the tournament to four goals and Toko-Ekambi also bagged a brace.

Cameroon have a maximum six points from two matches, and have already netted six goals. No other team has yet scored more than once.

The hosts will meet Cape Verde in their final Group A match, and with qualification already secured they have the option of resting key players ahead of the knockout stages should they choose to.