Burnt out public and Catholic school teachers go on strike

Independent Education Union Canberra organiser Berna Simpson said it was the first time since 1996 that members from the independent sector and the NSW Teachers Federation have gone on strike together.

"Members are feeling tired, overwhelmed and not respected," she said.

"The NSW Department of Education's own figures show that there were more than 1000 vacant permanent teaching positions in regional New South Wales alone," Mr Mercurius said.

"The way schools are operating with a teacher shortage means classes aren't being covered. There's minimal supervision. There's students in libraries and in outdoor covered areas, instead of their usual lessons."

Both unions are calling for a pay increase of 5 to 7.5 per cent per year as well as cuts to paperwork, reduction of face-to-face teaching time by two hours per week and an end to staff shortages.

Mr Mercurius said the 3 per cent pay increase currently on offer from the NSW government would equate to a $3000 pay cut in real wages considering inflation was more than 5 per cent.

"This is a very serious measure we've taken to go and sacrifice salary, but we're doing it out of desperation to show the government that we cannot go on like this."

Catholic Education Canberra Goulburn director Ross Fox said the second full-day strike this term was disappointing considering the further disruption it would cause in schools.

"Catholic Education agrees our teachers deserve a meaningful pay increase, and we are working with them and their union to deliver that," Mr Fox said.

"We have agreed to at least meet the pay increase awarded to public school teachers as well as a range of other benefits."

"In this context, we need to find a balance that fairly recognises the great work of our teachers while keeping our schools affordable."

NSW Education Minister Sarah Mitchell said the strike was unnecessary and would cause major upheaval for hardworking parents.

"After two and a half years of learning disruption due to COVID-19, another day out of the classroom is the last thing our students need," Ms Mitchell said.

"The wages policy sets out a pay increase for teachers which is the most generous in the country. The government must take a balanced approach that allows us to also build schools, reform early education and work with the teachers to modernise and grow their profession."

"There is so much demand on admin, all of this extra stuff that takes place outside of your actual teaching of the children ... that we physically and mentally do not have the time to do it," she said.

"There is no work life balance."

Ms Evans said she had to book her own children into holiday care for the school holidays to catch up on her work and usually spends 15 hours or more per week working outside the regular school day.

Braidwood Central School teacher Alisa Stephens said, in her 22 years of teaching, the compliance and documentation requirements have increased enormously.

"We're doing it in the same time that they had in the '50s, which was largely a one-size-fits all model. And now we're expected to individually meet the needs of every student in our class in that same time, and it's just not possible," Ms Stephen said.

Merici College religious education coordinator Andrew Blakey said it was very difficult to recruit teachers as casuals or to fill vacancies, especially in maths and science.

"The changes in that have occurred in teaching in the last two years, we've lost a lot of experienced teachers in that time," Mr Blakey.

"We're just not doing enough to encourage young people to go into the teaching profession anymore and even once we get them, we're burning them out so quickly."

He said the role had become less about teaching and more about bureaucracy during his 35-year career.

"We've got to do something to bolster the profession of teaching, make it an attractive option for young people coming out of school. And then we've got offer support for our young teachers, give them career pathways make it a profession and a calling that they want to do for the rest of their lives."

Teachers from around the region will gather at Canberra's Thoroughbred Park on Thursday for a strike rally.

Some schools will be closed, some will open for supervision while others will remain operational.

ACT public schools are not affected by Thursday's strike. 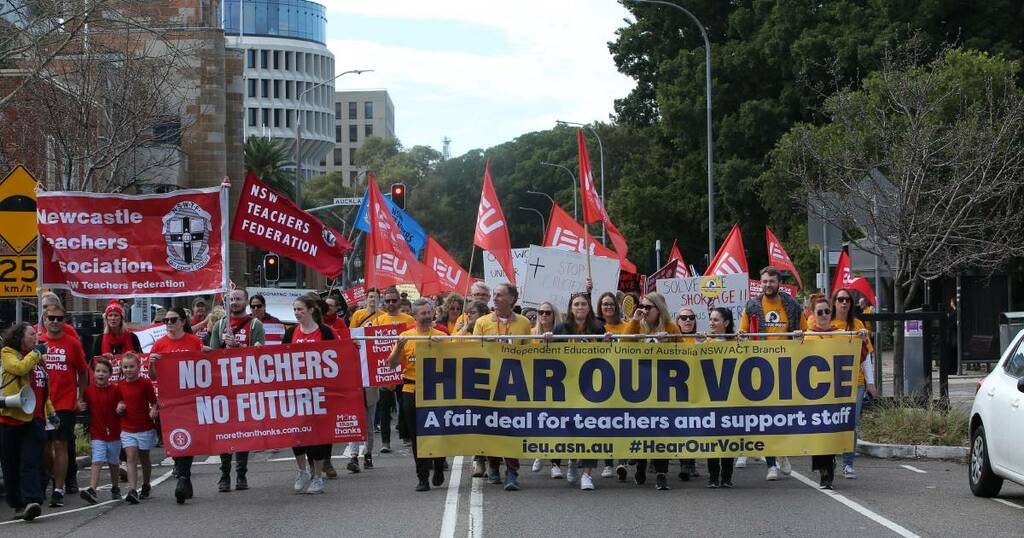 "We're in a situation where staffing shortages are impacting on every single school."

The union says industrial action will continue until the verbal agreement is put in writing.