Brooklyn Nets Season Preview: Do-Or-Die For Durant And Harden, But Will Irving Derail It All? 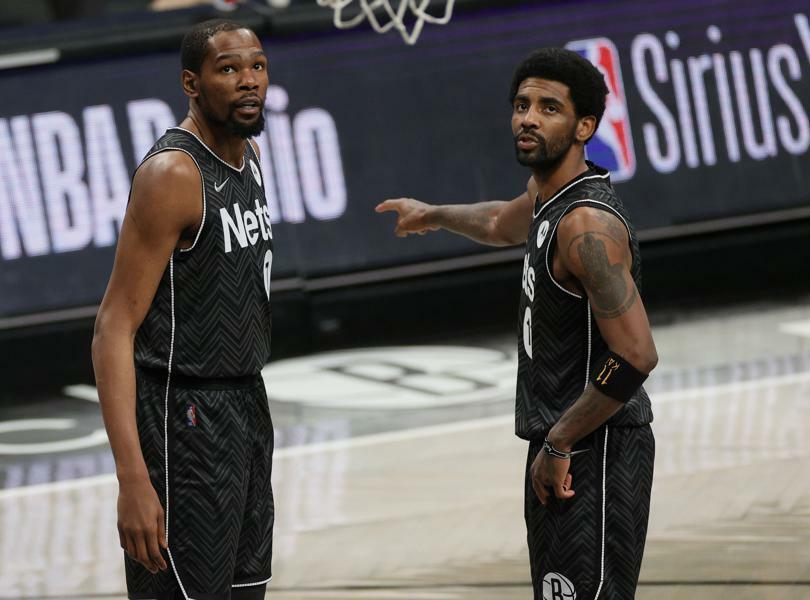 Irving’s apparent decision to skip the Covid-19 shot could strip the Nets’ Big Three down to a Big Two of Durant and Harden, at least for Brooklyn’s games at Barclays Center, where proof of vaccination is required to enter. And that could be the case for road games as well, after general manager Sean Marks said Tuesday that Irving was not going to have “part-time availability.”

Not that much, to be honest! Expect Steve Nash to utilize the same Starting Five he employed in the playoffs: Durant, Griffin, Harden, Joe Harris and Irving.

With the addition of Patty Mills (San Antonio), Paul Millsap (Denver), Jevon Carter (Phoenix) and the return of LaMarcus Aldridge, Brooklyn’s back-ups have only gotten better.

The pressure is on. Barring injuries to the Big Three, the Nets are clear favorites to win it all. General manager Sean Marks did good business in the summer. If anything, the roster has only gotten stronger.

Coach Steve Nash has settled in Brooklyn and will welcome the arrival of new assistant coach Brian Keefe, who worked with Durant and Irving before and proved himself a defensive specialist coach at the Thunder, the Knicks and the Lakers — a quality that the sometimes sloppy Nets defense might benefit from.

Team MVP: Kevin Durant may still be looking nervously down at his feet from time to time ... after all, if his shoes were two sizes smaller, or he had put his sole down an inch further back in the final minutes of Game 7 against the Milwaukee Bucks, he may have scored a three-pointer to win that game... and could have taken his team to the NBA Finals. Alas, it’s a fresh season and he has another chance.

On a roster stacked with superb talent, KD somehow sticks out. Durant showed in last season’s playoffs that he’s a big game performer. That will come in handy in the post-season.

The longest-serving Net on the roster has something to prove this year. Harris didn’t quite deliver in the Milwaukee Bucks series of last season’s playoffs when Brooklyn really needed him to step up. But that was an anomaly for “Joey Buckets,” who buried an NBA-best of 47.5% attempted 3-point shots in the basket last year. (Yes, he really trumped Steph Curry there.)

Harris is the guy you want to pass the ball to when the Nets are 2 points down with 3 seconds left in the 4th quarter. And he’ll likely be wide open, because his opponents will be guarding Durant and Harden (and maybe Irving) instead. That makes the small forward Brooklyn’s X-Factor.

The Nets might be favorites to win it all, but that does not mean they’ll win the Eastern Conference. In fact, during last year’s regular season, Brooklyn was lucky to come in second. Their terrible run of injuries meant the Nets had their Big Three of Durant, Harden and Irving hooping together for just 202 minutes before the playoffs.

There were also some pretty humiliating defeats, like a 111-122 loss at the Detroit Pistons in early February — a result that left even the level-headed Steve Nash muttering tightlipped about lack of focus and an absence of intensity.

Given their loaded roster, the Nets carry with them a sense of confidence that marks champions. However, confidence gone wrong can sour into lethargy, arrogance or distractedness against weaker teams. What will happen when Brooklyn’s super-team trails at the Orlando Magic or the Toronto Raptors in the fourth quarter?

Expect Brooklyn to collect some L’s here or there in the regular season. So when your father-in-law, your boss and your College lab buddy all bet 50 bucks on Brooklyn to win it all, why not take a reasoned risk instead? If you bet that the Nets will win fewer than 56.5 regular season games at -115 odds on DraftKings, you could turn the same 50 bucks into $93.47, almost doubling your investment.

Besides the obvious (hello, NBA title), another great scenario for the Nets and the future of their franchise would be for Cam Thomas to have a breakout season. The Guard, who turns 20 on October 13, turned heads at the NBA Summer League, where he was named Co-MVP alongside the Kings’ Davion Mitchell (23).

Brooklyn fans had to wave goodbye to many fan favorites like Caris LeVert or D’Angelo Russell over the past two years: Promising young players were traded away to bring in Durant, Irving and Harden. Thomas, selected by Brooklyn’s general manager Sean Marks with the 27th pick of the 2021 NBA Draft, could be a new rookie to root for.

This one’s simple. The Nets’ general manager Sean Marks bet everything on the Big Three bringing the title to Brooklyn.

If another injury crisis, Irving’s vaccination drama or a lazy defense prevents that from happening, Kevin Durant, James Harden and Kyrie Irving may decide they’d rather leave Brooklyn than stay around to pick up the pieces.