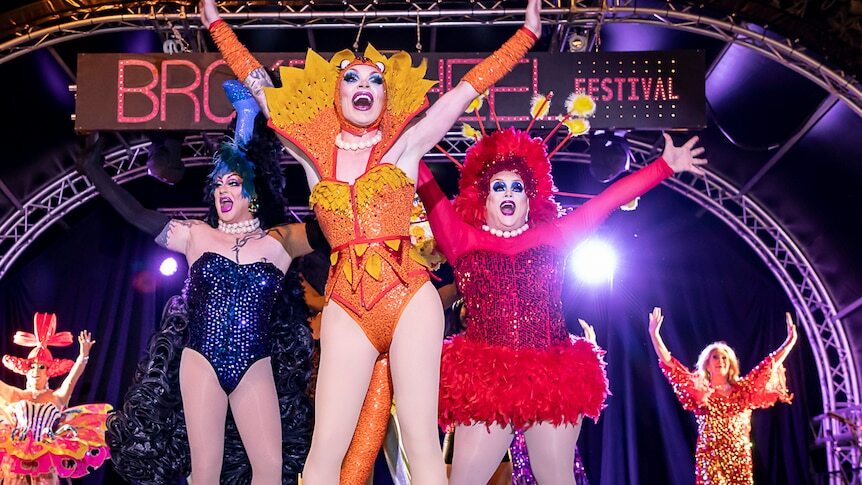 One of Australia's biggest celebrations of drag, music, performance and LGBTQIA+ culture has been cancelled for a second year in a row.

The annual Broken Heel Festival, held on the dusty backdrop of Broken Hill and the Palace Hotel in outback New South Wales, was scheduled for the first week of December and had provided a glimmer of hope in another COVID-rattled year.

But, after cancelling the event in 2020, and postponing its September date this year, organisers told punters they had no choice but to reschedule the five-day event for a new date in 2022.

The first Broken Heel Festival of 2022 will be held from March 24–28, and the second is scheduled for September 8–12.

Months of speculation and uncertainty meant organisers waited as long as they could before making the call.

Ticket holders took to social media to ask about the likelihood of the December event going ahead and were told chances were somewhere between "a glittery rainbow and the smelly part of an old bandaid."

While it looked like capacity restrictions on large, ticketed events would have eased by the December dates, festival director Esther La Rovere said the fallout from lockdown and previously cancelled events meant this year just wasn't viable.

"We've refunded quite a significant number of tickets since we have moved the event twice already and we didn't feel there would be a quick enough turnaround to generate enough ticket sales for our December event," she said.

The new dates mean the Broken Hill region will be inundated with events, navigating two editions of Broken Heel as well as the Mundi Mundi Bash.

"It's really going to be a jam-packed year for everybody up in Broken Hill and hopefully we can still pull off two fabulous events for our guests," Ms La Rovere said.

Event organisers are hoping ticket holders are not too disappointed with another date change given the nation's road map to COVID-19 recovery was still underway.

Drag performer, festival host and co-director Philmah Bocks said while there was a strong sense that next year's events will go off without a hitch, the date changes have been challenging.

"There are a lot of moving parts to the festival and there is collateral damage when you have these big changes of dates," she said.

"All the things that keep us busy, like private gigs, weddings, hens' parties, thirtieths, anniversaries and other bigger events, plus all the other entertainment industry-based gigs are all now compounding."

But the date change has elicited a splash of positivity, with the March date meaning the December outback heat will be avoided.

"It’s a bit of relief from our queens knowing they won’t have pick up their faces; makeup is very heavy, so it’s very hot and thick," Philmah said.

While no further details were given, there are hints the new dates have provided some exclusive opportunities to expand the festival cast and crew.

"I’m also very excited about the new possibilities that have opened with the date change, even on an international scale."