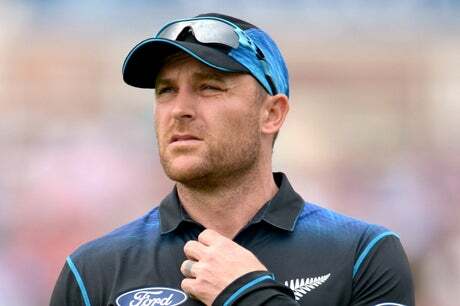 Brendon McCullum is a coup for England’s Test revolution... but surprise coach appointment isn’t without risk
When Brendon McCullum was appointed New Zealand captain in 2012, the great Kiwi batter and thinker, Martin Crowe, tweeted, then…

The Independent UK
One subscription that gives you access to news from hundreds of sites
Brendon McCullum: England close in on New Zealand great as shock Test coach appointment

Before he even starts work as England’s Test coach, Brendon McCullum can already claim to have left an indelible legacy on the country’s cricketing fortunes.

The dramatic World Cup victory in 2019 stands as the crowning achievement of the English game in recent years and its inspiration, according to the man who lifted the trophy at Lord’s, was McCullum.

Eoin Morgan forged a close bond with his Kiwi counterpart during their time as IPL team-mates with Kolkata Knight Riders and left an influence which would later see England go from one-day walkovers to white-ball world beaters.

McCullum’s men were the blueprint for the fearless, proactive unit Morgan’s England would become.

“He has certainly been an inspiration for me. He taught me a lot about leadership,” Morgan noted on the eve of the final.

In a pre-tournament interview with the BBC, he explained: “If you look at his body language at any stage of any game, it’s extremely positive. He’s always on the front foot and leading from the front, regardless of the scoreboard or the situation of the game.

“New Zealand had embodied playing fun cricket under McCullum. Playing against them, we were a little bit jealous.”

Now, having inspired England’s limited-overs renaissance from a distance, the 40-year-old from Dunedin has direct responsibility for lifting the Test team from a similarly low ebb. He has been handed the reins despite never previously coaching at first-class level, let alone internationally.

But the ECB’s director of men’s cricket, Rob Key, trusts more in people than checklists and believes McCullum is made of the right stuff. While the end of his playing career and the early years of his off-field journey were devoted to Twenty20s, he has a long and formidable CV in the longer form.

McCullum grew up at a cricket ground, with father Stuart a good enough player to make 76 appearances for Otago in New Zealand’s domestic competition.

He would later recall that his Dad’s match fees were modest enough to cover little more than “a pie, a pint and a punt”, but was himself destined for bigger things.

The big stage was beckoning, although it was initially unclear if it would be rugby or cricket that claimed him. He was adept enough with the oval ball to be selected ahead of future All Black great Dan Carter for the South Island schools side in 2000, but soon settled on his course.

In his early years he was not the statesmanlike figure he would later become, a fact he admitted when called to deliver the prestigious MCC Spirit of Cricket lecture in 2016.

“I was proud to be called brash, aggressive and perhaps even arrogant,” he told the congregation at Lord’s.

His elevation to captaincy, a controversial decision which led to one of his most illustrious predecessors – Martin Crowe – burning his blazer in outrage, precipitated a wholesale change of heart and outlook.

McCullum concluded of his under-performing side that “individually and collectively we lacked character. We were full of bluster and soft as putty. We wanted to be ‘blue collar’ in how we went about things, not aloof and superior”.

He became one of the most reliably box-office cricketers on the circuit, smashing a swashbuckling 158 not out in the first ever IPL fixture, making a Test triple century against India and doing as much as anyone to redefine the parameters of the ODI format.

A world Cup win would have been a fitting crowning achievement, but his side stumbled against rivals Australia in the final of the 2015 tournament.

Instead, he bowed out from the international stage in remarkable fashion a year later, smashing the fastest Test century in history in just 54 balls against Australia.

After earning his coaching spurs on the franchise circuit, with Trinidad in the Caribbean Premier League and KKR in the IPL, McCullum is once again ready to take on the world.

Brendon McCullum is a coup for England’s Test revolution... but surprise coach appointment isn’t without risk
When Brendon McCullum was appointed New Zealand captain in 2012, the great Kiwi batter and thinker, Martin Crowe, tweeted, then…

The Independent UK
One subscription that gives you access to news from hundreds of sites
Brendon McCullum: England close in on New Zealand great as shock Test coach appointment