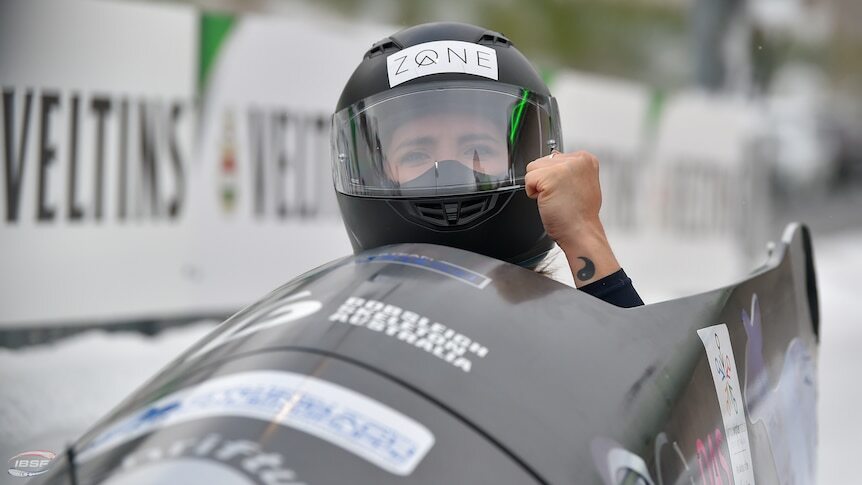 Bree Walker and Jakara Anthony have both won silver medals on their respective World Cup circuits, as Australia's winter athletes continue their build-up to the Beijing Winter Olympics in February.

After crossing the finish line on her side after the first run, having crashed on the notorious final corner of the formidable Winterberg track, Walker recovered to set the fastest time on the second run.

The podium performance is Walker's fifth from just six events this season and sees her move into second place on the world standings with just one event, in St Moritz next week, to go.

"I am really satisfied with what I have been able to produce so far this season in the monobob," Walker said.

Walker will be back in action on Monday in Winterberg competing in the two-woman World Cup event with brakewoman Kiara Reddingius.

Also in action for Australia in the Europe Cup series in Innsbruck, Austria, was Ashleigh Werner, who took home a silver and bronze medal in the monobob events and teamed up with brakewoman Tia-Clair Toomey-Orr to finish in fourth place in the two-woman bobsleigh.

Jakara Anthony back on moguls podium in Canada

On the snow, Jakara Anthony also made a return to the podium, winning silver in the second of back-to-back moguls competitions at Mont Tremblant in Canada.

The silver medal was Anthony's fourth moguls podium of the season.

Anthony had surrendered her position at the top of the overall World Cup standings after finishing fifth on the opening day of competition, with 17-year-old Japanese star Anri Kawamura taking over top spot.

However, the 23-year-old Queenslander roared back into form over Saturday night, edging Kawamura into third with a score of 79.02.

"I am really happy with my progression over the last four days," Anthony said.

"It was hard to get momentum after not having ideal training over the last three weeks.

"This course didn't really work to my strengths but I was happy to take on the challenge and come away with a silver medal."

French athlete Perrine Laffont, who suffered a horrifying crash at the previous round of competition at Alpe d'Huez in December, beat both to claim a second World Cup win of the season.

In the men's competition at the same venue, Brodie Summers was Australia's best performer, finishing in 13th spot. James Matheson (16th) and Cooper Woods (26th) were also in action.

Anthony remains in second place overall in the World Cup standings behind Kawamura with just one more event, at Utah's Deer Valley in midweek, before the Olympics in Beijing.