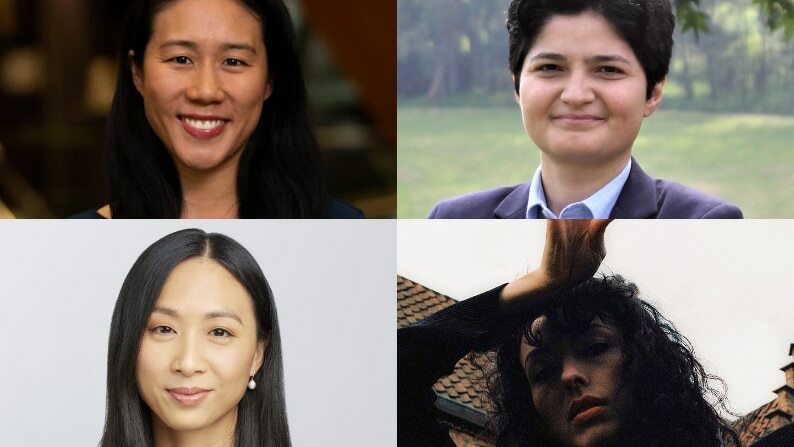 While Asian Australians continue to be underrepresented in leadership positions, some young women have managed to break through the "bamboo ceiling".

The ABC spoke to four finalists in the 2021 40 Under 40 Most Influential Asian-Australians Awards — a nanotechnology engineer, a ballet dancer, a human rights lawyer and a telco executive — about the challenges they have faced in their careers.

The awards are an initiative of the Asian-Australian Leadership Summit, and the ABC is a media partner.

Nanotechnology engineer Noushin Nasiri grew up in Iran, where her life was characterised by laughter and stories.

"I was the one who always had thousands of stories to tell, and that was the pillar of my personality," the 34-year-old says.

But when she moved to Australia in 2012 to do her PhD, she found she was a different person.

Language and cultural barriers made her feel isolated, thousands of kilometres away from her home country.

One night, she phoned her dad to talk about her struggles.

Her father pushed her to stay in Australia, advice she will always be grateful for.

After nearly nine years in Australia, Dr Nasiri has made the country her home.

She is the head of the NanoTech Laboratory at Macquarie University's school of engineering, where she supervises a group of students — many of whom are international, just like she was.

Dr Nasiri hopes to show others from migrant backgrounds, particularly young women, that it is possible to thrive in a new country and that people will still listen to you if you have an accent and make grammatical mistakes.

"Use these barriers as an opportunity to grow, don't look at them as barriers," she says.

"I grow every time I put myself out of my comfort zone."

'If only we could teach our kids to celebrate their differences'

For Juliet Burnett, dancing is not about looking pretty on stage.

"I'm not a goddamn entertainer, I'm an artist," she says.

Artistic expression runs in Burnett's blood. Her grandmother was a traditional Javanese dancer in Indonesia's Jogjakarta court, and her uncle was the late Indonesian poetry giant WS Rendra.

Rendra's famous saying that art is the voice of the people underpins Burnett's own philosophy.

The 37-year-old currently lives in Belgium, where she dances with Ballet Vlaanderen. She previously spent 12 years with the Australian Ballet.

By her late twenties, she had performed in principal and soloist roles for the Australian Ballet but was beginning to question what she was still doing in the same place.

She now hopes to help bridge the gap between Indonesia and Australia through dancing and cultural exchange.

"The thing that shocked me is that so many Australians just think of Bali when they think of Indonesia," she says.

She is preparing to launch an online dance studio and stage, A-Part, to connect Indonesia and Australia with the world and allow dancers in each country to collaborate.

With both Irish and Indonesian roots, Burnett acknowledges her pale skin has meant she has not faced the same challenges as some young Asian Australian women.

But she says they should be proud of their points of difference.

"If only we could teach our kids to celebrate their differences and uniqueness from that young age, imagine the things that we could achieve," she says.

'Be clear about what it is that you value'

Frances Voon was working in a Bangladesh refugee camp when she met someone she will never forget.

A little Rohingya boy, no older than one, had crossed the border with his family from Myanmar seeking a safer home.

"He had bright eyes and was as incredibly charming as a little infant could be," Ms Voon says, "but he was unregistered."

The boy's family had come to Bangladesh in a period when the government was not recognising new refugees, so he could not access the humanitarian program Ms Voon was working with.

A few weeks later, she returned to the camp to hear he had died.

Ms Voon, 39, now works as the executive manager of the Kaldor Centre for International Refugee Law in Sydney, which provides evidence-based information about forced migration to policymakers and the public.

Her own cultural background has informed her understanding of refugee issues; her parents migrated from Malaysia to Australia.

"Coming from a migrant background, you have a bit of a sense of what it's like to be a bit on the margins of society — to feel a bit precarious in terms of how fully you belong," she says.

Ms Voon thinks diversity leads to better decision-making, and she encourages young Asian Australians to look at their varied ways of seeing the world as an advantage.

"There's a power to acknowledging and owning the ways in which those different stories shape your own story," she says.

'Stand up and be heard'

At the age of 28, she became the youngest ever woman and first Asian Australian to be appointed as the head of corporate strategy at Vodafone Hutchison Australia, now TPG Telecom.

But Ms Mah, 31, says she is not in her role to tick a box. She says her success does not come from being a woman, Chinese, or young, but because she is excellent at her job.

At TPG Telecom, which is the second largest telecommunications company on the Australian Stock Exchange, Ms Mah plans and strategises for the company's long-term future and growth.

Her role involves grappling with the company's existential questions, like how can it stay relevant in the long-term future.

Ms Mah says she is inspired by leaders who have a strong sense of duty to the company – no matter their gender or cultural background.

However, she says she has noticed the odd photo or video of company management where everyone looks "eerily similar".

"I do think that companies need to appreciate that we shouldn't be hiring people that perpetuate the same views," she says.

Ms Mah advises young Asian Australians who want to work in leadership to be confident and vocal, even if that involves going against the traditional Asian values of showing the utmost respect to others and not expressing different opinions.

"When you're making it to leadership, you need to go beyond what might be considered the worker bee style and stand up, be heard and leverage your skills in order to lead ," she says.