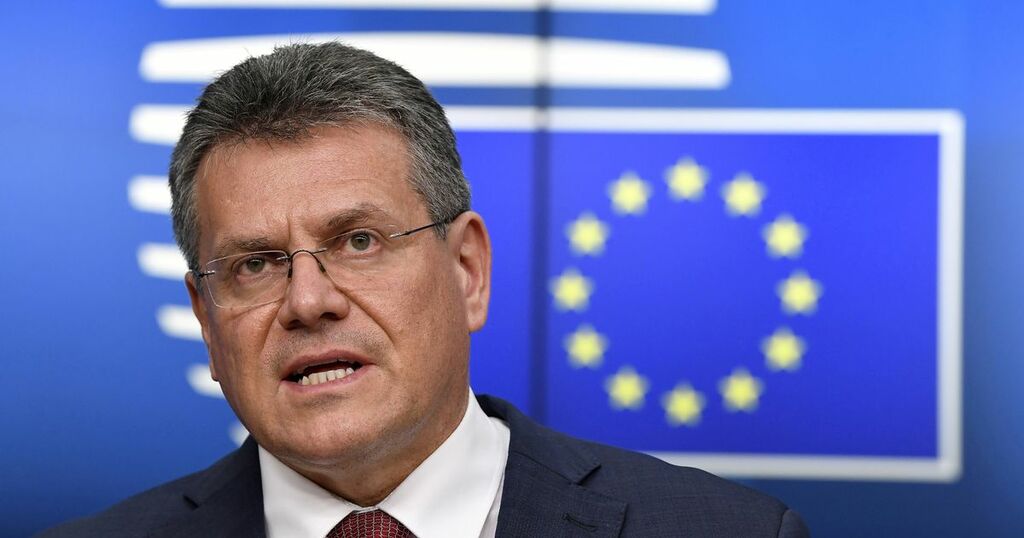 The EU has signalled an end to the post-Brexit "sausage wars" with an offer to slash 80% of the red tape on goods entering Northern Ireland.

But the bloc has said it will not budge on British demands to scrap the European Court of Justice's role overseeing the Northern Ireland protocol - setting the stage for a fresh standoff between Britain and Brussels.

The protocol governs Northern Ireland’s 310-mile border with the Republic – the UK's only land frontier with the EU – and was negotiated by Boris Johnson before Britain's withdrawal from the bloc.

Furious rows had broken out over the sheer level of red tape it meant for Ulster post-Brexit, which boiled over in the EU banning the sale of chilled meats made in Britain.

European Commission vice-president Maros Sefcovic has now unveiled new proposals for the movement of agri-food goods and medicines in what he calls a “direct and genuine” attempt to break the deadlock.

A three-week negotiation of parts of the protocol will now begin with Brexit Minister Lord Frost, but the EU has said its proposals are not "take it or leave it".

The drive to break the logjam comes after the UK threatened to trigger an emergency clause, Article 16, to suspend the protocol.

The mechanism effectively keeps the province in the bloc’s single market.

But the system creates a trade barrier in the Irish Sea for goods crossing from Great Britain – something Boris Johnson previously promised he would never agree to.

European leaders instead leaders bowed to pressure to ease rules on exporting sausages and a host of other goods from mainland Great Britain to Northern Ireland.

Unveiling a series of proposals that would slash red tape on Irish Sea trade, Mr Sefcovic dubbed them a “package of enhanced opportunities” with the potential for a “real tangible difference on the ground”.

The plan was designed to ensure “peace and stability are protected while avoiding a hard border on the island of Ireland”, he added.

The measures would see checks on retail agri-food products arriving in the region from Great Britain cut by 80%.

The overhaul would also axe fears some British produce, including Cumberland sausages, could be banned from Northern Ireland - bringing an end to the “sausage war” which marred UK-EU relations over the spring and summer.

The plan also includes a 50% cut in customs paperwork crossing the Irish Sea, while more products and companies would be exempt from customs tariffs.

The EU called on Britain to bolster labelling of certain products, making clear they were for sale in the UK only and could not be sent over the border to the Republic.

“The UK Government needs to do its part,” Mr Sefcovic told a Brussels press conference, urging

Britain to engage “earnestly and intensively on all our proposals”.

Lord Frost stressed the removal of the ECJ's oversight function in policing the protocol was a red line for the Government if compromise was to be reached.

"The problem with the protocol at the moment is that EU law, with the ECJ as the enforcer of it, is applied in Northern Ireland without any sort of democratic process," he said yesterday(WEDS).

"That, I think, has to change if we're to find governance arrangements that people can live with."

The PM’s former top aide Dominic Cummings earlier confirmed the Government always planned to abandon parts of the protocol once the UK had formally left the EU.

The Mirror reported how Lord Frost admitted the Government only agreed to the mechanism to get Brexit done.

In a late-night Twitter thread, Mr Cummings said the PM was unaware of the plan.

“He never had a scoobydoo (cockney rhyming slang for “clue”) what the deal he signed meant. He never understood what leaving Customs Union meant until 11/20. In 1/20 he was babbling 'Id never have signed it if Id understood it' (but that WAS a lie),” claimed Mr Cummings, who refers to Mr Johnson as a shopping trolley because of his habit of veering all over the place.

“We wriggled thro with best option we cd & intended to get the (trolley) to ditch bits we didn't like after whacking Corbyn.”