Braving all odds for a trek to Siachen 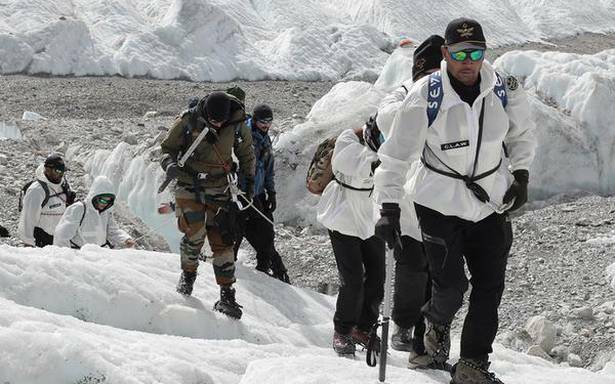 A team of eight persons with disabilities created a new world record for the “largest number of people with disabilities” to scale the world’s highest battlefield, Siachen Glacier, by scaling up to the Kumar Post at an altitude of 15,632 ft. The team with disabilities was trained and led by CLAW Global, a team of Special Forces veterans who had left the service due to disabilities.

“The expedition team climbed a total distance of 60 km atop the spine of the Siachen Glacier over a period of five days from September 7 to finally reach Kumar Post on September 11,” said Major Arun Prakash Ambathy (retd) of CLAW Global. The expedition was actively supported throughout by the Army, he said.

Stating that the team ascended 4,000 ft gradually while scaling the Glacier, Major Ambathy said the route involved crossing several deep crevasses, icy glacial water streams, hard-ice stretches and undulating rocky moraines. “This not only tested the physical endurance and mental stamina, but also the ice-craft skills of the participants, in use of ice axe, crampons, ladder crossing and rope skills,” he said.

On the challenges faced by the team, Major Ambathy said the extremely rough, rocky and undulating terrain along the moraines of the glacier made the climb particularly challenging for the visually impaired and the leg amputees. “They displayed phenomenal grit despite the challenges,” he said adding that the participants with hand amputation had to constantly work on their balance, managing the rope and work on adaptations for emergency rescue procedures.

This is the land world record expedition part of “Operation Blue Freedom Triple World Records” being undertaken by CLAW Global. CLAW Global was set up in January 2019 by Major Vivek Jacob (retd), a Para Special Forces officer, who had to hang up his boots following a combat skydive injury after 14 years of service in the Army, with the aim of teaching life skills to adventurers and people with disabilities.