Leeds boy, 14, armed himself with a knife to protect his disabled sister as thugs smashed their way into his home

A 14-year-old boy armed himself with a knife to protect his disabled sister as a group of thugs smashed up his family home.

The boy had been watching television in the living room at his home in Middleton Park Mount in Leeds on October 4 last year when Daniel Clough, Alexander Buckley and two others began attacking.

The teenager's mother, her partner, and his older brother and his pregnant partner were all in bed. Leeds Crown Court heard on Friday how the boy's mum was woken by shouts at the front of the house.

Prosecutor Nadim Bashir told the court it was around 11pm when the thugs descended on the property. He said: "She looked out the window and saw two men smashing up her oldest son's, partner's car. Her oldest son and partner got up and identified Daniel Clough, who was carrying the knife. He saw Daniel Clough shouting, 'Open up. If not, I'm making my way in.'"

Clough then smashed his way into the house through a window and stood at the bottom of the stairs waving a knife. Before he could get inside, the 14-year-old boy went to the kitchen, armed himself with a knife and went to his sister's bedroom. The girl had trapped herself in the room while the rest of her family watched on from the upstairs landing.

Mr Bashir said: "Daniel Clough got into the house through a downstairs window and was armed with a knife and had cut himself and was bleeding quite heavily. The police siren could be heard and that was sufficient for all of the individuals to make their escape.

"The police arrived at around 11.10pm and came into Middleton Park Mount and a female police officer saw two other men running down Park Road and gave chase."

Buckley - who was wearing a blue tracksuit jacket - was caught by the officer but managed to escape by wriggling out of it and made good his escape while shirtless. Clough was still bleeding heavily and was caught by officers as he tried to flee the scene through a ginnel. He told police he had been stabbed and then refused to speak.

Mr Bashir said that the next day enquiries resumed and Buckley, who lived in the area on Middleton Park Crescent, was spoken to by officers. It was only when the officers returned to the police station and showed another who had almost caught him the night before and she identified him on their body-worn camera that he was arrested.

As the officers returned to Buckley's house, they found his windows had been smashed and he had an injury to the back of his head. Buckley said a "number of men had gone with baseball bats" and a rucksack had been stolen. He was arrested and taken to the police station where he was identified by one of the victims.

Mr Bashir said Buckley had been offending since he was 12-years-old and had convictions for offences including violence, robbery, theft and at the time of the aggravated burglary was the subject of a suspended sentence order for coercive and controlling behaviour.

The court heard Buckley was also to be sentenced for production of cannabis. In March 2020 he was arrested for assault and while in custody a search warrant at his home in Forest Road in Dalton was carried out. Small bags of cannabis and a grow was found in a cellar. The entrance to the cellar was through a wooden floorboard hidden under the carpet. A total of 15 plants were discovered nd had an estimated retail value of around £16,000.

Clough started offending when he was 15 and has 16 previous convictions for 44 offences including assault on an emergency worker, going equipped for burglary and possession of cocaine and cannabis.

Aubrey Sampson, mitigating for Buckley, said he continues to deny his involvement in the aggravated burglary but accepts the guilty verdict put forward by the jury. Mr Sampson said: "What he does put forward in the pre-sentence report was to how the family must have felt at the time of the incident and that they must have been absolutely petrified.

"It was a joint enterprise but from an individual point of view, Alexander Buckley, there was no evidence whatsoever he had a weapon."

Recorder Christopher Rose said: "He was part of a group. It appears he intended for Daniel Clough to go in with a knife with the intention to steal."

Mitigating for Clough, Andrew Peterson, told the court since his remand into custody in November, he has been trying to improve himself. He added that at the time of the offences, he was 19.

Mr Peterson said: "He has undertaken courses and is ambitious and wishes to work. He is not a young man without hope despite his record. He has made productive use of his time. He is working while inside and has undertaken an English Literacy course. In a letter to the court he expresses his remorse."

He told then: "You were both part of the general disorder outside of the house. Daniel Clough, you waved a knife and went into the house. Two teenage children were downstairs at that point, that must have been a terrifying experience."

The judge said the children's mum had prepared a statement for the court and said her daughter - who needs to sleep downstairs due to her disability - is "deeply anxious and thinking that someone will come in and the impact on her has been enormous."

The woman who was staying at the house with her partner said in a statement she now suffers with "extreme anxiousness and sleeplessness." She added it had caused her stress during her pregnancy and had affected her relationship.

Recorder Rose said both Buckley and Clough will serve up to half of their sentences in custody before being released on licence. 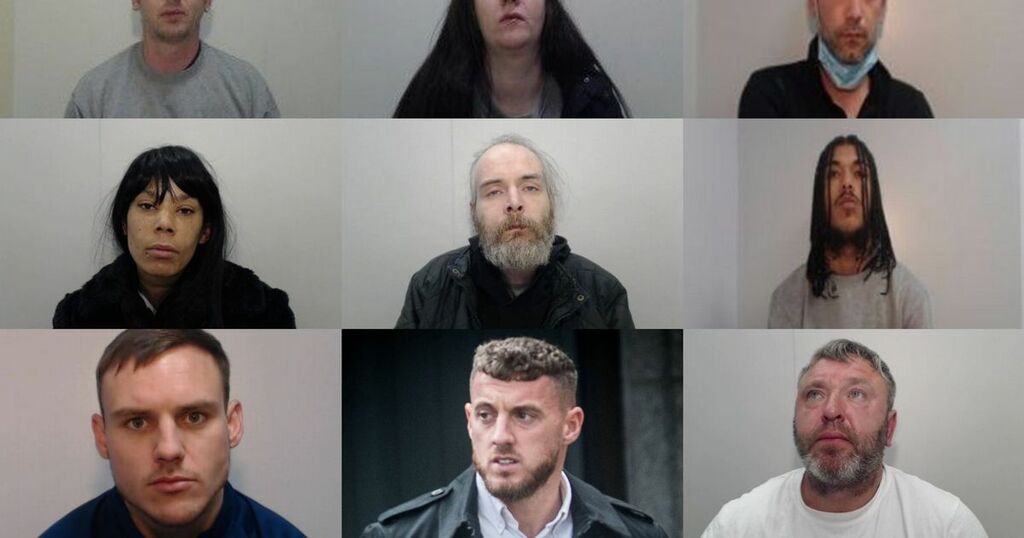 Criminals locked up in Greater Manchester this week May 9
Jail sentences are handed out to some of the worst offenders each week. Here are some of the newest prisoners…

Stuart Doughty, 33, went to his dad's home in the early hours of April 19, this year, and carried out…

WARNING, DISTRESSING IMAGES: Cilla the beloved family dog was attacked so badly during the terrifying raid she later lost an…