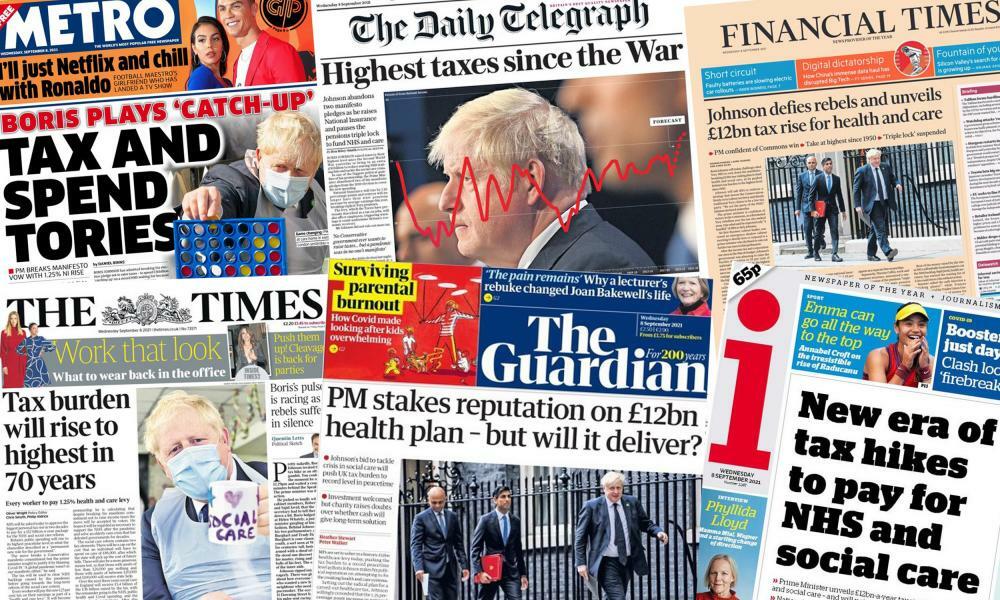 The prime minister strikes a series of unusual poses on the front pages of UK papers as he sets out his tax hike plan, with MPs likely to pass the £12bn healthcare levy on Wednesday.

The Guardian’s headline asks whether the plan will deliver. It quotes Labour leader Keir Starmer, social care providers and charities saying that the extra resources will be insufficient or, as Starmer puts it, like “a sticking plaster over a gaping wound”.

A jagged red graph runs over Johnson’s face in the Daily Telegraph alongside the headline “Highest taxes since the war.” The line shows taxes as a percentage of gross national income from 1953 to the projected level under the proposal.

The Times has a photograph of a masked Johnson holding a coffee mug hand painted with a star, a heart and the words “social care”, taken at a visit to a London care home on Tuesday. Its headline: “Tax burden will rise to highest in 70 years”. The new levy is the “first significant new tax since VAT half a century ago,” the paper reports, though it points out that the overall tax burden - at 35.5% – will still be lower than Germany at 39%, and France at 40%.

In the Daily Mail, a masked and aproned Johnson chats to an elderly woman at the care home. “Now make the care worth the cost, Boris,” the paper demands. The “good news”, it says, is “After years of neglect, a plan at last for UK’s social care crisis”. The bad news, is the highest tax burden “in history,” as well as help for families not starting for two years.

Metro has the PM playing Connect 4, with the caption “gamechanging”. The headline is “Boris plays ‘catch-up’: tax and spend Tories”.

The Sun has Johnson rolling a pair of dice, the faces depicting coronavirus, sterling, and the NHS logo. This is “Bojo’s biggest gamble,” it says.

The i paper plays it straight, with “New era of tax hikes to pay for NHS and social care”.

On the Financial Times: “Johnson defies rebels and unveils £12bn tax rise for health and care”. It calls the strategy one that “moves the Conservatives firmly into Labour territory”.

On the Daily Mirror: “He still doesn’t get it … Careless,” with one if its key points “struggling workers to be hit hardest in funding plan”. The photograph is of the prime minister looking dumbfounded.