Border separates groom's family from his wedding just kilometres away 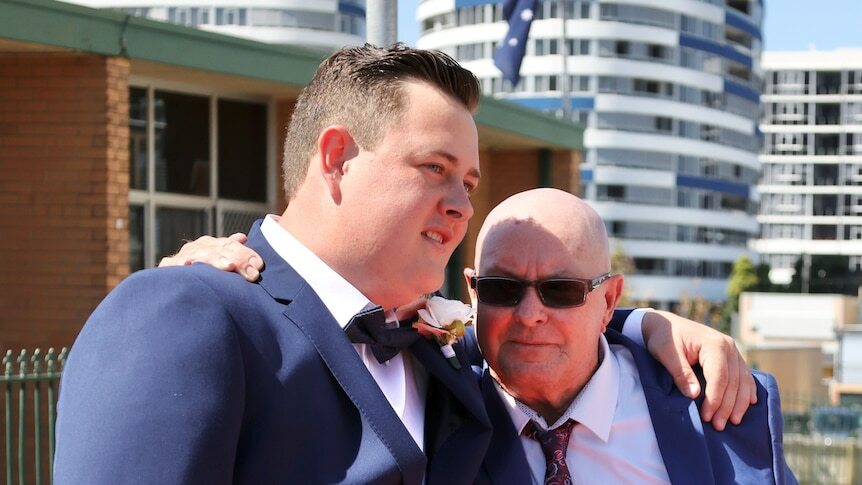 What should have been tears of joy at a wedding, was instead a teary reunion for the Jones family — separated by the Queensland, New South Wales border today.

Jakes Jones was on his way to marry the love of his life on the Gold Coast but his father and grandmother were unable to attend, stuck on the New South Wales side.

He and his groomsmen stopped for a quick hug and photo at the Bay Street barrier — not how father Mark Jones had hoped to celebrate his son's big day.

"They were getting married at Currumbin, the wedding had been planned for about 12 months and we've come from Kingscliff area so there's no way we can get across.

"We're pretty devastated, hopefully this s*** will all end on Monday and maybe we can celebrate then".

Unable to congratulate his son at the altar, Mr Jones gave his son some final well wishes at the orange border barrier instead.

"They were at Greenmount last night, so we came here yesterday and had a beer and just planned to meet again today so we could see them dressed up and have a photo," he said.

"I can't wait to be able to give them both a hug and a kiss and celebrate with them".

Unable to hold back tears, grandmother Beverley Staunton, said she was devastated to missing the milestone event.

"It's horrible, I love him to death and I can't be there for him," she said.

"It's just sad, the wedding is outside in a garden, we're outside you know, why couldn't they just let us go through?"

Heartbroken to be missing out, Mr Jones took solace in the fact that he was still able to share a hug and a wedding photo of some kind with his son.

"It's great to just have something I can look back at seeing as I wasn't at the ceremony," he said.

"Just being able to see that and feel some way a part of it.

"And there would be thousands of others going through a similar thing, it's just ridiculous...but hopefully we can do it all over again and see each other soon".