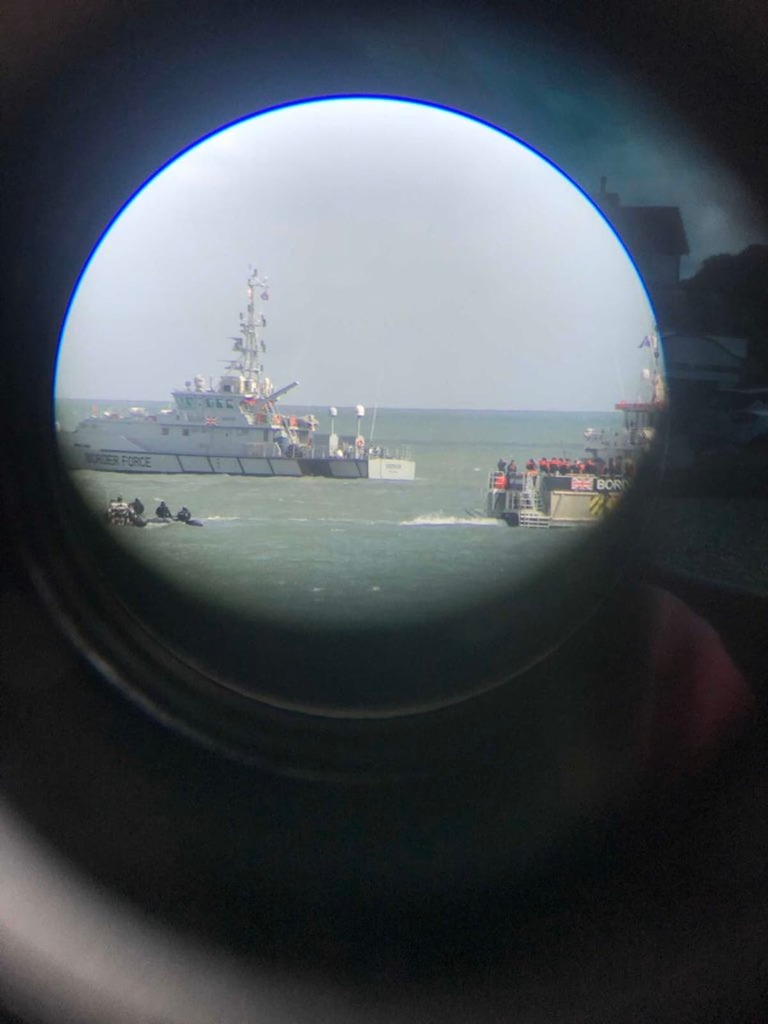 Border Force staff have used jet skis to turn around dinghies in the English Channel as part of a training exercise, footage suggests.

Channel Rescue coordinator Steven, who recorded the video off the coast of Kingsdown, in Dover, told The Independent he had observed “pushback drills” involving two large Border Force vessels, two smaller ribs, three jet skis and two dinghies on which they were “practicing”.

“They were putting Border Force staff into the dinghies and sitting on the tubing, replicating how people crossing would be sat,” said Steven, who didn’t want his full name used for fear of online abuse.

“We saw the jet skis either side and at the rear of the boat and then collide with the vessel to actually spin it around. It looked dangerous.”

It comes after it was reported last week that home secretary Priti Patel had ordered officials to rewrite the UK’s interpretation of maritime laws to allow Border Force to turn small boats around, with members being given special training to handle migrant boats.

France subsequently warned the Channel could become a “theatre of human tragedies” as the country’s interior minister vowed to not cooperate with the controversial plan, sparking a major diplomatic row.

The clash came as leading lawyers, a senior Tory MP, the union representing Border Force officers and a former chief of the naval staff all agreed that the pushback policy was likely to be unworkable without French cooperation.

Lawyers and campaigners meanwhile warned that the plan would be illegal and would place lives at risk – echoing concerns raised by the UNHCR and others to similar tactics used elsewhere in Europe.

Steven from Channel Rescue raised concerns that the Border Force training exercise would be “completely different” to the practice of diverting small boats when migrants are in them.

“They’re rehearsing with their colleagues, but for those making the crossing they will not know who these people are, they are having their boats very closely followed and then essentially rammed by armoured jet skis. It’s an incredibly aggressive and violent act,” he added.

“On top of the violence and aggression, it is actually illegal. They are recklessly endangering the lives of those making the crossing.”

Bridget Chapman, of the Kent Refugee Action Network, said: “It’s infuriating that this utterly pointless exercise is being pantomimed in view of cameras. There are no circumstances under which pushbacks like this could be done legally or safely.

“It’s time that the government behaved responsibly and made serious efforts to resolve this completely chaotic situation. People have died. None of us want any more to die. We need a grown-up, humanitarian response that will actually work. This isn’t it.”

The number of asylum seekers who have crossed to the UK via small boats in 2021 so far is already just over 6,000 higher than the number of people who made the crossing in 2020 – though this is in large part due to a change in method of travel in recent years.