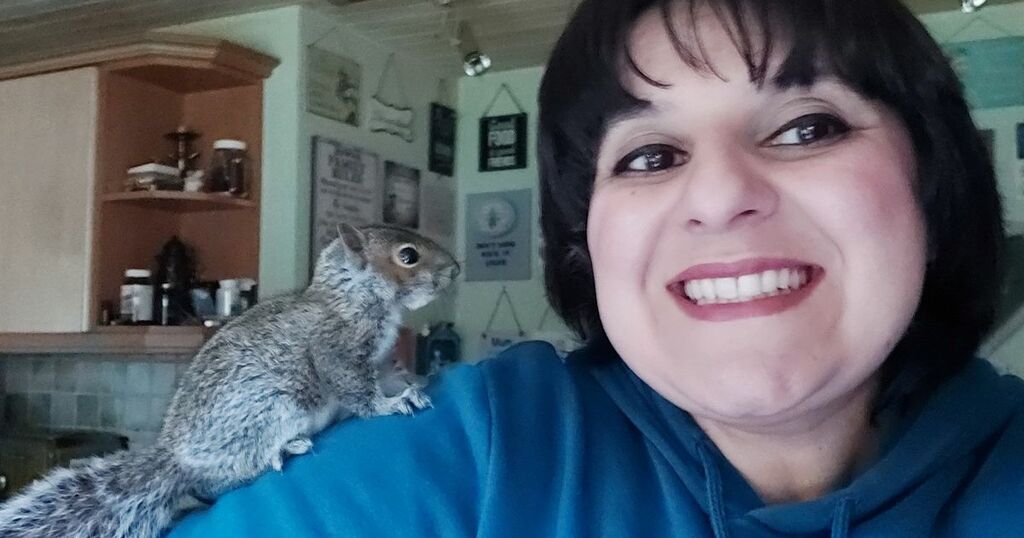 A Bolton family who rescued a lonely baby squirrel are so nuts about him they set up a nursery - giving up a whole room in their house.

Salma Khan, 40, shooed away four eager cats, including family pet Sherman, who were eyeing the petrified rodent in her garden.

The cold, weak, creature clung to her fourteen-year-old son Zayn Teemil's foot for comfort - sucking at the shoe he was wearing.

The caring mum filled her fluffy pink bed-socks with uncooked rice which she popped in the microwave to make heat packs which the tiny animal snuggled-up to while they waited for his squirrel-mother.

The kind family salvaged a box from the recycling - pinching bedding from their hamster supplies to make a nest.

READ MORE: Tesco implements checks on shoppers' receipts before they are allowed to leave store

Ex primary-school teacher Salma took the small grey rodent into the family home at dusk, because she couldn’t get a rescue place.

The family cared for Jonjo for 16 days - trying to reintroduce him to the wild, and eventually taking the little critter to a squirrel rehab home.

Stay-at-home-mum Salma, said: “It really was very funny having him and it got me out for walks.

“I loved watching him: he’s so agile. He’d get right up onto your head, in your hair, and into any gap in your clothes.

“If you didn't let him he’d scream at you. He was properly spoiled - it was like he had little tantrums.

"He just needed his mum: he clung and clung to the heat packs as soon as I put them down, so we called them the mama-socks.

“Although it’s lovely to have the space back, we were very lucky to have him, and we all miss him.”

Salma was distracted by a loud squawking, which she believed to be an injured bird, in her garden as she pottered in the kitchen at 2pm on September 5.

Surprised Salma saw a hamster-sized critter with a near-naked tail: a baby squirrel probably eight or nine weeks old, clinging to the base of a tree.

Salma and her kids kept the kitties at bay with a water pistol, but every time they put Jonjo back by the tree he screamed.

She said: "It was such loud squawking: like screaming. I couldn’t believe something that small could make such a loud noise.

“I’ve never seen a squirrel that small: it was a little bit too young to be out of its nest.

“He just kept screaming for his mum, but that drew more attention from the cats."

The rescuers took Jonjo into their six-bed house round 7pm, and Zayn donated his electric blanket to keep the baby warm.

Eventually Jonjo made his own nests: curling up inside a big ball of string, and robbing paper napkins from Salma's art supplies.

Salma went in to their local RSPCA on Monday morning, and was told she ought to have left little Jonjo outside to find his own fate, and he would be put-down if she brought him in, she said.

Baby Jonjo tucked into bread and rusk soaked in milk at first: sucking at his food and kneading with his front paws: like a kitten.

“It just kept reminding me of what a tiny baby he was," Salma said.

“He was helpless and it pulled on the heart strings, even though he was very demanding."

Salma and the kids let their little pet ride about in their pockets and hoods.

He even went to collect Zayn from youth club.

After a couple of days he ate sitting on a party platter, with berries nuts and seeds set out around him in special separate sections.

Little Jonjo ran back to Salma and kept screaming if she put him outside, but she tried to leave him out in the garden three times a day.

She took him to a woodland across the road where he liked staring into the brook.

She introduced him to other squirrels in the garden but he ran up and sat on her shoulder or hid in her pocket.

She said: “It was a bit frustrating waiting for him to become independent.

“We would go for nice walks around the garden, but I’d do all the walking while he sat on my shoulder.

“His feet only ever touched the grass so he could run back to me from whatever perch I put him on."

Salma felt Jonjo was ready to leave home after day 12, and took him to his favourite woodland where he scampered up a tree: running away from her for the first time, and started making a nest of moss.

She donated another pair of her socks and collected his nesting materials from the house.

“He was so happy playing and running up and down the tree," she said.

“He was eating nuts and blackberries. He was happy for me to go and ran to see us when we visited.”

The family found him cold and barely moving three days later, so they took him home, where he revived.

Salma finally found a home where he could be gradually reintroduced to other squirrels and the great outdoors, and dropped him off on Tuesday 21.

“He looked so ill, and I could hear little noises when he breathed. It’s really difficult when you can’t ring anybody for advice.

"We all miss him, but he needed to go," said Salma.