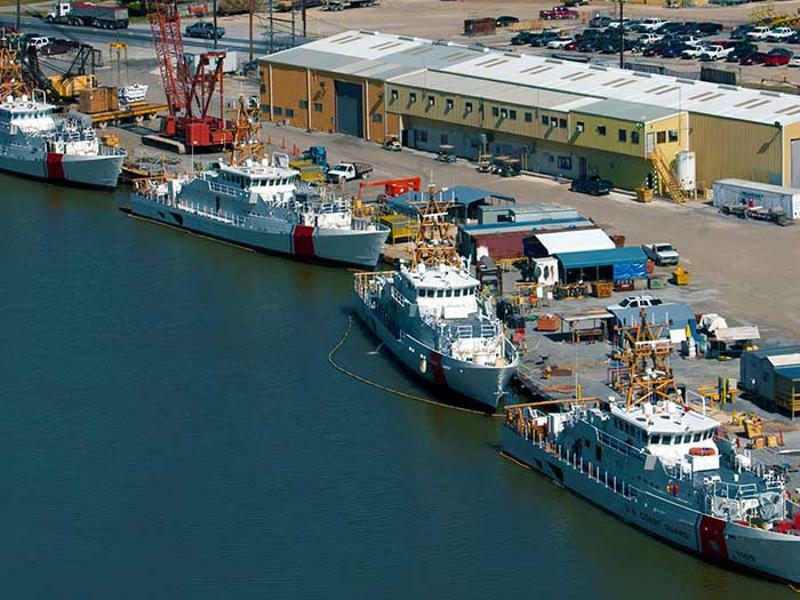 In a little-noticed resiliency milestone, hurricane-hit Bollinger Shipyards, LLC, has notified the U.S. Coast Guard that it will deliver the next Sentinel class Fast Response Cutter early. In government shipbuilding, an early delivery is rare enough, but maintaining an accelerated schedule after a direct hit by a Category 4 hurricane is unprecedented.

For the Gulf Coast, where naval shipyards routinely collapse under the weight of far weaker storms, Bollinger’s strong recovery after a late-August hit by Hurricane Ida, a Category 4 storm, is a major victory for corporate disaster planning, a serious approach to hurricane preparation, and the Gulf’s stronger, hurricane-informed building codes.

Shipyards are uniquely vulnerable to hurricanes. Built on the water’s edge, high-tech fabrication, instrumentation, and other equipment are either installed or stored within easy reach. Each yard’s workers, living nearby, are at risk as well. Keeping the workforce and facilities safe over the course of a hurricane is a tough, costly challenge that most shipyards don’t want to deal with.

Instead, many naval shipyards on the Gulf Coast see hurricanes as something of a business opportunity—a chance to grab as much post-recovery money as possible and to re-negotiate and re-baseline troubled government projects that are over-budget or behind schedule. But Bollinger, even though the company will likely still need recovery assistance, has shown that a different route is possible. Going forward, the only real risk is if the government downplays Bollinger’s earlier resiliency efforts, ignores Bollinger’s successful recovery, and continues to subsidize resiliency failures without recognizing and incentivizing members of the defense industrial base that are trying to do the right thing.

On the Gulf Coast, it is time to incentivize investments in hurricane resiliency, rewarding those companies that do what they should do to endure disasters while, in turn, penalizing those that see an ugly post-hurricane collapse as the best route to long-term profitability.

Rather than diversify operations, scattering production and repair facilities across several states, Bollinger has eleven facilities scattered throughout the bayou. And as Hurricane Ida took a bead on the state, landing near Port Fourchon, home of Bollinger’s newly developed, 46-acre multi-use vessel support facility, Bollinger faced a worst-case scenario. All of Bollinger’s major yards were directly in the path of one of the three strongest hurricanes to have ever hit Louisiana.

But Bollinger had battened down. “We learned in years past you can’t afford to wait,” said Ben Bordelon, Bollinger’s President and CEO, in an interview with the New Orleans Advocate. The company secured its shipyards, and put salvage, construction contractors and other suppliers on notice that their help would be needed in the aftermath.

Though the power was out and the phones were down, the privately owned company responded quickly, checking in on workers, establishing an employee relief fund through the Baton Rouge Area Foundation, and scrambling to get facilities back to work. Bordelon told the Advocate, “The main goal for us was to get people back to work and also take care of our clients.”

The company’s preparation before the storm paid off. “Over the past three weeks, the main goal for us was to get people back to work so that we could keep taking care of our customers. Preparation was key, but our ability to recover as quickly as we did was a reflection of the strength and resilience of the Bollinger workforce,” the company wrote in a recent social media post.

Bollinger also focused on keeping their work force intact. The company kept paying workers in the week after the storm, offering workers free food and water, and has been helping employees receive direct aid payments from the newly established relief fund.

The workforce is responding. Even though many Bollinger workers and their families still lack electricity and running water, the 650-person Sentinel class Fast Response Cutter production line is back at work, and the company expects to deliver the company’s next cutter, the future USCGC John Scheuerman, to the Coast Guard later this month, ahead of schedule.

While Bollinger’s display of post-Hurricane bravura may not be reflected in all the projects and business lines supported by the company’s 11 Louisiana facilities, the recovery at the Lockport yard shows that shipyards can, if they take hurricanes seriously, keep facilities and workforces intact even in the face of intense storms.

On the Gulf Coast, hurricane aid is a necessary thing, helping shattered communities get back on their feet. After storms, federal disaster support is always going to be a real help for Americans who cannot afford to protect themselves, but, in Gulf Coast shipyards and other mature components of the defense industrial base, Washington’s approach to post-hurricane recovery may well be incentivizing bad behaviors.

For far too many Gulf Coast shipyards, big hurricanes are big business opportunities. A tsunami of post-hurricane disaster assistance can was away all the tough fiscal consequences of chronic shipyard underinvestment, poorly performing contracts and bad disaster planning. With damaging hurricanes hitting every decade or so, some shipyards effectively make hurricanes part of a business plan, counting on federal help to fund shipyard recapitalization and re-baseline troubled projects.

For shipbuilders, post-hurricane federal largesse is enormous. After Hurricane Katrina hit as a Category 3 storm in 2005, the Navy asked Congress for $2.76 billion to help three struggling naval shipyards, including $1.13 billion to cover production delays for naval ships. That wasn’t all. On top of all the Federal aid, the three big shipyards in New Orleans and the Mississippi towns of Gulfport and Pascagoula pursued a billion dollars in insurance claims. Overall, the extra billions helped the three poor-performing yards consolidate and become more efficient, forming the foundation for the 2011 creation of Huntington Ingalls Industries , a now-booming shipbuilder and defense contractor.

After Category 5 storm Hurricane Michael hit Panama City in 2018, Eastern Shipbuilding Group, builder of the Coast Guard’s Heritage class Offshore Patrol Cutter, trumpeted their initial recovery, but then sought and received “extraordinary contract relief” on their Coast Guard contract. That help allowed Eastern to make a profit on what was likely to become a big money-losing contract, rebuild their yard, and may well have positioned the yard to get contracts for even more of the $411 million mid-sized cutters.

Hurricanes can always be counted upon to wreak havoc on the Gulf Coast, but Bollinger is showing the way. Post-hurricane aid will always be needed, but, with shipbuilding, it may be time to start means-testing government assistance. Rather than keep handing out money to laggards that ignore hurricane-ready building codes, fail to plan out a hurricane response or try to use disasters to wriggle out of contractual obligations, it is time to start rewarding resilient portions of the Gulf Coast’s defense industrial base. Help will always be needed. But prepared shipyards, that, as Bordelon related to the Advocate, “got punched in the face” and emerged intact, deserve more than just a pat on the back.