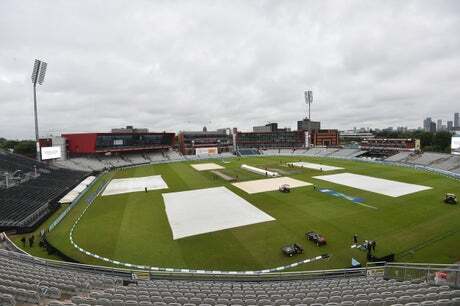 Uncertainty reigned at Old Trafford this morning as England’s Test against India was cancelled. A thrilling series has been denied its final chapter.

Thousands of fans were already at the ground by the time the announcement was made, and many more were on their way.

The discomfort of India’s players is understandable, after four members of their backroom staff tested positive for Covid. It may be that, although they are clear now, more positives could emerge in the coming days. That said, they were happy to take the field for the final day of the Fourth Test at the Kia Oval after three positive tests.

This Test was already the subject of significant dispute earlier this year, when India looked to get it cancelled so they could schedule the IPL to restart next week. Well, they have got their way — albeit in roundabout fashion — and the disputes can resume.

What matters to each party? For the ECB, it is about salvaging as much of the estimated £40million that this game is worth as possible. If it is simply wiped for Covid reasons, they will be hugely out of pocket.

If they can get India to accept that they forfeited the match, the picture will look prettier. India are clearly not keen on that, offering to reschedule.

England and their players will have to accept that there are uncomfortable parallels with their aborted tour of South Africa late last year.

There are differences, certainly. This game has the better part of 100,000 tickets sold for it. And, while we should be careful not apportioning blame over how Covid gets into a camp, England were suspicious of the biosecurity arrangements and South Africa’s interpretation of them from the very first day of a tour that felt doomed.

This time, there is a perception in the England camp that there has been one rule for them and one for the Indians, right up to rumours that players were out and about in Manchester when they were supposed to be isolating yesterday. This follows the ill-fated book launch in London last week.

What all this means for Test cricket, cricket during the pandemic, or England’s winter plans, who knows?

Through the chaos and uncertainty, there is great sadness that a successful summer with fans in the stands has ended in such unfortunate fashion.

When he said there were no winners in this situation, ECB chief executive Tom Harrison was absolutely right.