Trevor Strnad, the lead vocalist and co-founder of the US melodic death metal band the Black Dahlia Murder, has died aged 41. His bandmates confirmed his death on social media. No cause was given, but contact information for the National Suicide Prevention Lifeline was shared alongside the announcement.

“It is with deep sadness that we announce the passing of Trevor Scott Strnad,” the Michigan group said in a statement. “Beloved son, brother, and [shepherd] of good times, he was loved by all that met him. A walking encyclopedia of all things music. He was a hugger, a writer, and truly one of the world’s greatest entertainers. His lyrics provided the world with stories and spells and horror and whimsy. It was his life to be your show.”

The band’s lead guitarist, Brandon Ellis, called him “one of the funniest and most entertaining people to walk the earth. The life of the party that is the Black Dahlia Murder, as well as any given room he happens to occupy. A lyrical mastermind. A champion of the entire culture of heavy music. Also my biggest supporter.”

The wider metal world also paid tribute to Strnad. Matt Heafy of Trivium called him an “icon of modern metal”.

“He was such a sweet guy,” said Robb Flynn of Machine Head. “Had him on my podcast about 10 months ago, he was very open about struggling with depression. It’s a sad day for the metal community.”

The Black Dahlia Murder formed in 2000, naming themselves after the 1947 unsolved murder of aspiring actor Elizabeth Short and citing acts such as Metallica, Pantera and Judas Priest as influences.

After they released several EPs independently, they signed to Metal Blade Records in 2003, which became their long-term home. Their most recent release for the label was 2020’s Verminous. The title referred to metal fans being the carriers of a cultural plague.

Strnad and rhythm guitarist Brian Eschbach were the only constant members of the group, which had a fluctuating lineup. Their highest-charting album was 2011’s Ritual, which reached No 31 in the US Billboard album chart.

Strnad came to heavy metal as a child obsessed with horror films and fantasy. “I used to cruise the metal aisle and look at all the artwork at the record stores back in the day,” he told Echoes and Dust in 2020. “Once I really figured out that there was music about dragons, skeletons and shit like that, it felt perfect for me. Once I had opened that book, there was no stopping me.”

He described horror and metal as “healthy outlets for negative energy”, though admitted that being the lone metal fan in his teenage community could be isolating. “I feel like the average person doesn’t see the merit in our culture and our world and doesn’t see how passionate we are, how it gives us so much life. It’s definitely been instrumental in shaping who I am.”

In a 2021 interview with Metal Injection, Strnad was open about the toll of drinking on tour as a way of maintaining the persona fans expected of him, and of the aesthetic pressures he felt as the band’s frontman. “It’s accumulated in some self-doubt, in more anxiety for me as the band has gotten bigger and bigger, and there’s more eyes and more pressure,” he said.

“I want my 40s to be awesome,” he said, expressing his desire for the Black Dahlia Murder to last another 20 years and for him to “segue into being an older metalhead gracefully”.

Strnad said that being left alone with his thoughts during two years of the pandemic had been “so dangerous” for him, and that he was exploring psychedelic and ketamine therapy as a way of breaking out of old self-defeating thought patterns and helping him push past a creative blockage.

Talking about his mental health publicly had helped him, he said. “And I figure it might be helping somebody else to know that I’m a human being and that someone that maybe they look up to for inspiration goes through it too.”

• This article was updated on Thursday 12 May to correct an error: the Black Dahlia Murder play melodic death metal, not black metal. 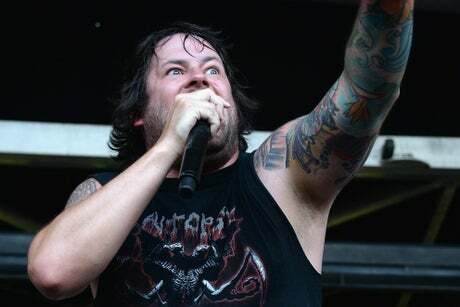 Artist is being remembered by his bandmates as ‘a hugger, a writer, and truly one of the world’s greatest entertainers’

The Independent UK
My Chemical Romance: how the vilified band turned antipathy into triumph