Biomass is promoted as a carbon neutral fuel. But is burning wood a step in the wrong direction? 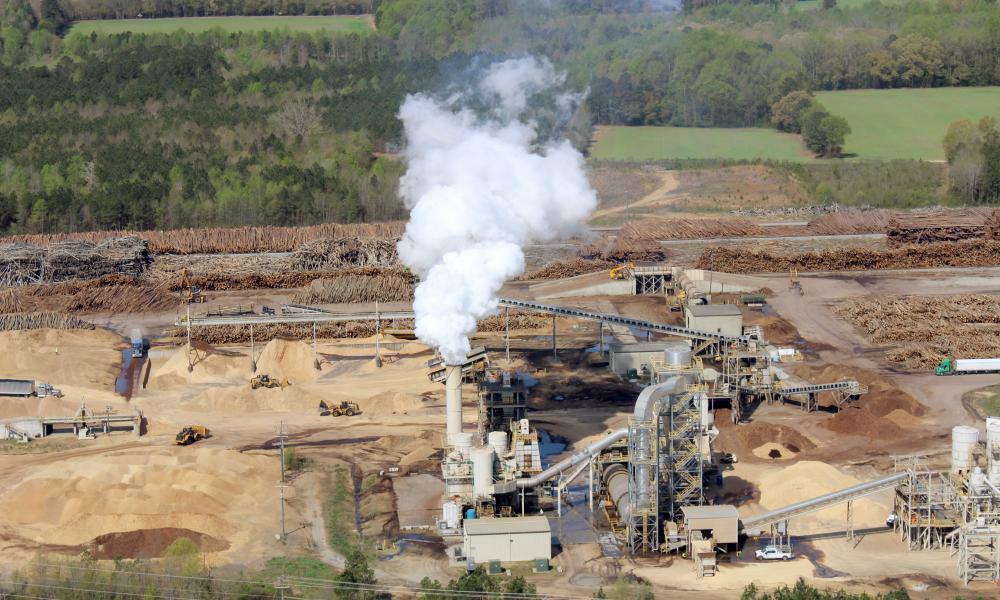 Thick dust has been filling the air and settling on homes in Debra David’s neighborhood of Hamlet, North Carolina, ever since a wood pellet plant started operating nearby in 2019.

The 64-year-old said the pollution is badly affecting the health of the population, which has already been hit hard by Covid.

“More people are having breathing problems and asthma problems than ever before,” David said. She started suffering from asthma for the first time two years ago and other people in Hamlet have been getting nosebleeds, which she also puts down to the dust.

“The older people have it the worst,” she added. “They stay inside most of the time and when they do come out they struggle to breathe. They can’t sit out in their yards like they used to.”

The plant, owned by Maryland-headquartered Enviva, the world’s largest biomass producer, is one of four the company operates in North Carolina, turning trees into wood pellets, most of which are exported to the UK, Europe and Japan to burn for energy.

Biomass has been promoted as a carbon-neutral energy source by industry, some countries and lawmakers on the basis that the emissions released by burning wood can be offset by the carbon dioxide taken up by trees grown to replace those burned.

Yet there remain serious doubts among many scientists about its carbon-neutral credentials, especially when wood pellets are made by cutting down whole trees, rather than using waste wood products. It can take as much as a century for trees to grow enough to offset the carbon released.

Burning wood for energy is also inefficient – biomass has been found to release more carbon dioxide per unit of energy than coal or gas, according to a 2018 study and an open letter to the EU signed by nearly 800 scientists.

This CO2 is theoretically reabsorbed by new trees, but some scientists suggest relying on biomass could actually end up increasing emissions just at the time when the world needs to sharply reduce emissions and reach goals of becoming net zero by 2050. “During these decades, warming increases and permafrost and glaciers continue to melt, among other permanent forms of climate damage,” said Tim Searchinger, a senior energy and environment research scholar at Princeton.

Over the last decade a wave of biomass plants have opened their doors or ramped up production across the US south, where they have access to the region’s vast hardwood and other wetland forests, many of which are on unprotected private lands.

Campaigners say there is an environmental justice aspect to the industry, too. The plants are 50% more likely to be located in counties where at least 25% of the population is Black and other people of color and where poverty levels are above the state median, according to an analysis by the environmental non-profit Dogwood Alliance. Hamlet, David’s neighborhood, has a poverty rate of nearly 29%, significantly above the state poverty rate of 13.6%.

Still, the biomass industry continues to grow, supported by subsidies especially from the UK as well as the EU, which declared biomass a carbon-neutral energy source in 2009 and is relying on it to help the bloc replace fossil fuel energy and meet climate goals.

At least 22 plants in the south-east are now exporting pellets to Europe, according to the Southern Environmental Law Center (SELC). This number is increasing, with permits filed or issued for 12 more plants, according to the SELC.

Nearly 200 miles from Hamlet, Belinda Joyner, a retired resident of Garysburg, North Carolina, has been campaigning against the nearby Northampton county Enviva plant since it began operations in 2013. The 68-year-old said she was angry at what she feels is happening to her community.

She is concerned about forest loss as well as air pollution from the biomass facilities which, according a report from the Environmental Integrity Project, have been found to emit hazardous pollutants such as airborne particles called PM2.5 and volatile organic compounds, linked to health and environmental problems. “The trees are gone and there’s a lot of particulates in the air,” Joyner said. “We need oxygen and we need trees to breathe.”

Joyner said residents’ sleep was disturbed by the “unbearable” noise produced by the pellet plant’s 24/7 operations. Many people have lived here all their lives, she said, and they “shouldn’t have to put up with the noise, dust and the pollution”.

Enviva said any suggestion of unbearable noise, traffic or pollution caused by its facilities was a “gross misrepresentation” of its operations. The company said its emissions did not present a public health risk and the health conditions alleged by residents “are not related to our operations and any claims that they are, are false”.

All sites operate in strict compliance with laws and regulation and emissions levels are regularly tested, Enviva said. The company uses industry-proven air emissions control technology​​, a spokesperson said, adding: “Our plants are the most environmentally controlled plants in the industry, if not the world.”

Enviva said it had not received any complaints about dust from its North Carolina plants and pointed to the presence of other industrial facilities in Northampton and Hamlet, saying: “Noise and traffic impact of a combined industry presence in the area is sometimes used against us by groups who oppose the biomass industry.”

The company said it chose the location of its plants based on factors including proximity to low-grade wood, transport and an accessible workforce, adding that the industry “propels economic development in rural areas”. Enviva also referred to its community work, telling the Guardian “we work hard to be both a good neighbor and a good employer”. It pointed to an award it received from the Northampton county chamber of commerce in June for community outreach.

Toby Chappell, county manager for Greenwood county, South Carolina, where Enviva has another plant, said the company had had “a positive economic impact”, employing more than 100 people and creating a secondary market for timber owners who can sell “some of their less desirable wood products”.

At an August 2020 virtual public hearing on the company’s plan to install pollution control equipment and increase production at its Greenwood county plant several people, especially those involved in the forestry industry, spoke in favor of the plant. James Sanders Jr, of the Greenwood County Forest Landowners Association, told the hearing: “Markets for forest products such as those provided by Enviva will help slow the conversion of South Carolina’s forest to more intensive land use.”

But several residents living near the plant said the factory had harmed their health and quality of life. One resident, Annemarie Humm, speaking on behalf of a group of residents opposing the plant’s expansion, said: “We feel trapped. We urge you to keep our air clean, our nights quiet, so we and our children can sleep.”

The future of biomass

For the biomass industry, burning wood for energy will play a vital role in transforming the energy system. Sustainably sourced biomass is “one of the important tools available to mitigate the climate crisis”, said Jennifer Jenkins, Enviva’s chief sustainability officer, adding it provided “low-carbon” power “with the potential to generate negative emissions”.

Some scientists have also pointed to carbon and forestry benefits of burning wood for energy, where forests are managed sustainably and harvested using good forestry practices.

Puneet Dwivedi, associate professor at the University of Georgia, has argued that looking at biomass on a landscape-level – a whole forest rather than an individual tree or clump of trees – means the carbon emitted by burning one tree will be recaptured within a year as the forest grows.

The UN’s Intergovernmental Panel on Climate Change said biomass can mitigate emissions, provided resources are developed sustainably and especially when wood residues and waste are used.

However, environmental groups have suggested that forests are not necessarily being managed sustainably. Many people assume that wood pellets for biomass are made from waste wood, offcuts and residues, said the SELC attorney Heather Hillaker, but that is not always the case. “Anything that is not profitable to go to a sawmill, [biomass producers] consider waste,” she said, adding that this includes whole trees deemed to have no economic value to the forestry industry.

A 2018 investigation by the current affairs program Dispatches on Britain’s Channel 4 claimed that mature trees were being felled in Virginia to feed Enviva wood pellet plants. Enviva said the program’s claims were “illegitimate” and that the trees were not high value or whole trees.

Jenkins said all of Enviva’s wood was “low-value”, meaning limbs, tops or trees that would otherwise go unused. The company only sourced “fiber from the bottom of the harvest value scale”, she said, and had “strict sourcing guidelines that hold us to the highest standards of sustainability”. A spokesperson for Enviva said: “We categorically do not support biomass production in the US or abroad that threatens endangered species, harms biodiversity, or diminishes water quality.”

As the international community hammers out how to decarbonize energy and stave off catastrophic climate change, debates about biomass’s role are growing louder.

In February 2021, an open letter from more than 500 scientists called on Joe Biden, along with other world leaders, to end the subsidies for biomass so as not to “undermine both climate goals and the world’s biodiversity” by replacing burning fossil fuels with burning trees.

In July the EU amended its Renewable Energy Directive, saying it would continue to use biomass but “tighten the sustainability criteria”, including prohibiting the use of biomass from primary and highly biodiverse forests. But biomass is still considered an important part of the renewable energy mix in the UK and the EU – bioenergy made up 60% of the bloc’s renewables in 2020.

In Garysburg, Joyner is calling on global policymakers and industry bosses to acknowledge the problems with biomass. She said the voices of those who live near wood pellet plants are “still going unheard” as the biomass industry continues to grow.

“Profit over people – that’s how I see it,” Joyner said. “As long as they’re making that money, they don’t care how people feel and they don’t care what’s going on in your community.”