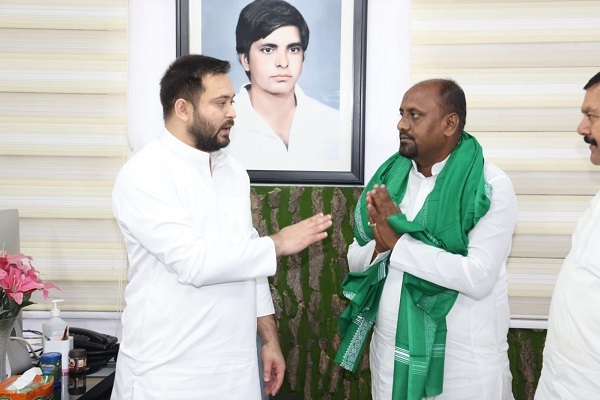 Munger (Bihar): Amid the reports of a strained relationship between Tej Pratap Yadav and his younger brother Tejashwi Yadav, Sanjay Kumar Yadav, a candidate who filed nomination as an independent candidate from Tarapur officially joined RJD on Saturday in the presence of the Leader of Opposition Tejashwi Yadav.

Soon after his candidature made headlines, Sanjay Yadav was called to Patna to meet Tejashwi Yadav. After joining the party Sanjay Yadav said that he will take his nomination back and will support RJD candidate Arun Kumar Saah. "He (Sanjay Kumar Yadav) said that the victory of RJD is certain, so he will withdraw his nomination and support RJD candidate," RJD tweet added.

Recently a list of star campaigners for the by-elections in Bihar was released by the RJD, Tej Pratap Yadav had been left out even as it includes the names of the party supremo Lalu Prasad Yadav and Leader of Opposition Tejashwi Yadav. By-polls in Bihar in the Kusheshwar Asthan and Tarapur Assembly seats are scheduled for October 30 with the counting of votes scheduled on November 2. (ANI)