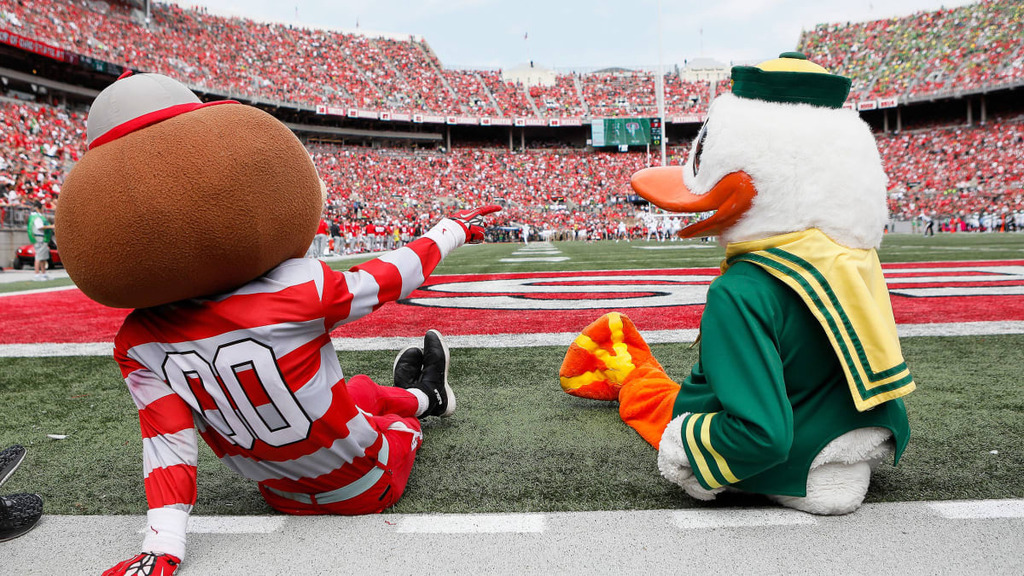 COLUMBUS, Ohio — Walking shoulder to shoulder, each in their Sunday best, the two commissioners briskly strode through the Ohio State press box as if they were joined at the hip.

In a way, they are. George Kliavkoff, the new Pac-12 leader, and Kevin Warren, head of the Big Ten, have spurred a wave of change in college football over the last several weeks. They helped found the Alliance, have led a movement to pause College Football Playoff expansion and have formed a pact, along with the ACC, to collectively agree not to poach each other’s members.

On Saturday, the two were palling around on a two-game road trip, first here at Oregon’s game at Ohio State, and later to Washington at Michigan.

Forget the results for just a second. The matchup in Columbus—a cross-country, out-of-conference clash between two reigning league champions and top-15 clubs—is a good example of what’s to come in the future, the two commissioners say.

As part of the Alliance agreement, the three conferences (Big Ten, Pac-12 and ACC) plan to schedule football games against one another in the coming years. They envision that each one of their teams will play two games, home and away, each season against teams from the other two conferences.

Ideally, that means the Big Ten and Pac-12 reducing their league games from nine to eight (the ACC already plays eight). It provides teams with four nonconference game openings: two Alliance matchups and two against the lower level of college football.

Alliance games will be spread out over the course of the entire season, too, giving America what Kliavkoff calls a “trifecta” of Alliance matchups every week—at least three each Saturday. And these games won’t only be scheduled years in advance. They could be arranged eight months before the meetings.

Just imagine it: league officials scheduling the 2023 ACC champion against the 2023 Big Ten champion in a 2024 season opener. Or how about the last-place Big Ten team tangles with the last-place Pac-12 team from the previous season? At least we can determine who’s the better bottom-dweller!

Maybe we get playoff rematches the very next year. This year, for instance, could we have seen Clemson meet Ohio State on one of the school’s campuses? It’s possible, says Kliavkoff. And these Alliance games are expected to extend from Week 1 to the very last week of the season. Yes, nonconference clashes will finish the year. Imagine undefeated USC traveling across the country to play in Miami’s Hard Rock Stadium to finish a season with serious playoff berths on the line.

However, there are some hurdles. First off, several administrators from Alliance conferences have said they do not plan to cancel existing nonconference games previously scheduled with the Big 12 and SEC. Secondly, the Pac-12 and Big Ten, as mentioned, must drop from nine to eight league games, something the conferences are exploring. And there’s something else. The ACC has four annual rivalry games with SEC teams that are steeped in tradition: Louisville-Kentucky, Florida–Florida State, Clemson–South Carolina and Georgia–Georgia Tech.

Previously scheduled games and rivalry series with the Big 12 and SEC will be preserved. Teams with such games would be required to play only one Alliance game a year. For example, because it plays Georgia each season, Georgia Tech would have one Alliance game each season. If it wanted, it could schedule two, giving the Yellowjackets three nonconference games against Power 5 programs—something normally avoided.

“It would be up to the school,” says Kliavkoff.

The Alliance isn’t just about scheduling. The three leagues seem committed to further exploring, and not immediately approving, the 12-team playoff expansion model released earlier this summer. For a wide range of issues, CFP executives are expected to at least temporarily pause any approval of the model at meetings later this month in Dallas.

Some believe any expansion should wait until the playoff’s contract with ESPN expires after the 2025 season—a way to grant opportunities to media patterns other than ESPN to bid on the most lucrative package in college sports history.

Conference realignment threw a proverbial wrench into this whole thing, triggered by Texas and Oklahoma moving to the SEC. Kliavkoff and Warren both expressed relief that the Big 12 is settled with its four new members. They expect Power 5 realignment to now be over. What’s that mean?

“We can move forward with discussion about the playoff,” Kliavkoff says.

There are other issues with the 12-team model that go beyond a media partner. That includes the bowls and their role in expansion. In the 12-team proposal, the bowls host quarterfinals and semifinals, but the first round is hosted on campus. Some college officials believe bowls should host first-round games as well. Others, believing a 12-team model extends the season too much, are more in favor of an eight-team model.

The Rose Bowl and its position is also a sticking point. The Rose not only plays its game at a traditional date and time each year (2 p.m. PT on Jan. 1) but also owns a lucrative contract with both the Pac-12 and Big Ten that, while integrated into the playoff, is separate. The bowl, and maybe the conferences, too, want to keep it that way.

While CFP expansion may be years away, the scheduling component of the Alliance is not, commissioners say. Next year? Maybe.

Already, there are plenty of games between Alliance teams that have already been played or are scheduled for years down the road. There are even several this very week: Michigan State plays at Miami, Nebraska visits Oklahoma, Minnesota is at Colorado and Northwestern goes to Duke.

However, it’s Kliavkoff’s team that won the big one, when the Ducks buried the Buckeyes. In fact, as he paraded down to the field from the press box on Saturday at Ohio Stadium, the commissioner glanced at reporters and quipped a message.