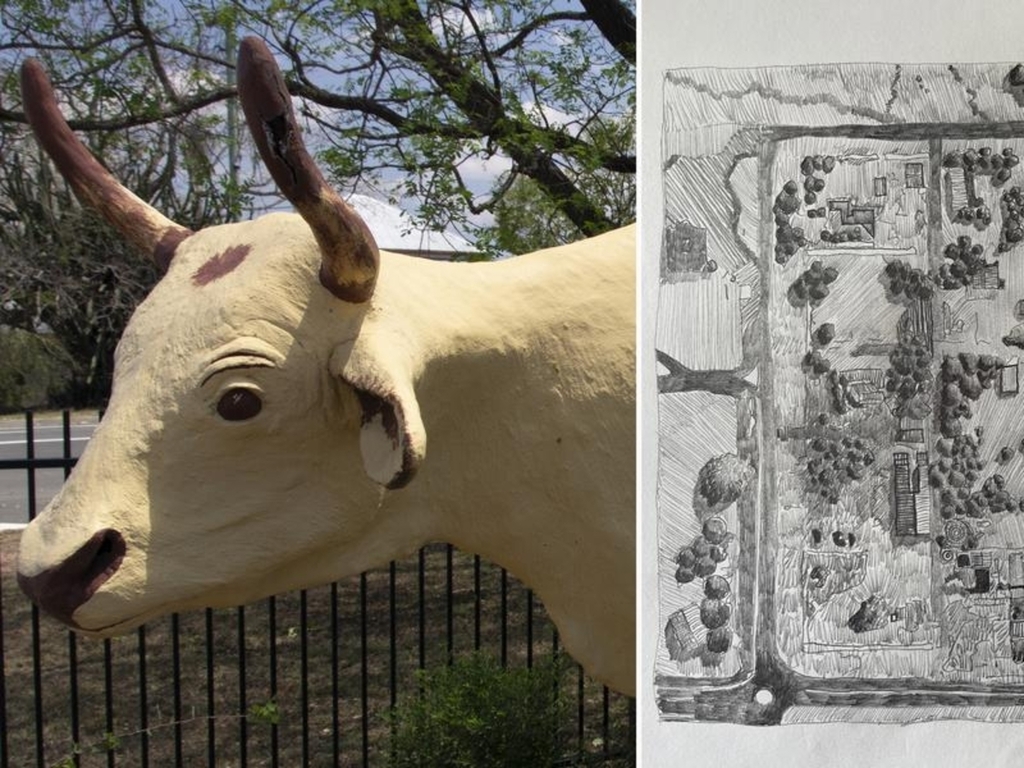 The Queensland town of Banana might soon have an oversized tribute to the bendy yellow fruit that's entirely irrelevant to its existence.

There's not a banana plant in sight in the central Queensland outpost. The hot, dry conditions that prevail there simply aren't ripe for it.

In fact Banana was actually named after a young yellowish-coloured bull that wormed his way into the affections of local stockmen in the 1860s by helping them herd wild cattle into their yards.

There's even a statue of him standing proudly in the town.

But that hasn't stopped an eagle-eyed out-of-towner from mounting a campaign to give Banana its next big thing and all it will take is a lick of yellow paint.

Hamish Thompson was passing through, in the days before COVID-19 restrictions, when he "discovered" a big banana hidden in plain sight in the form of an aptly shaped traffic island.

"When I arrived, I discovered that the town is actually named after a 19th century bullock. I also discovered, having visited the shop and the restaurant, a town that is completely banana-free, or so I thought," he said.

During his overnight stay at the Banana Motel, he claims to have awoken "after a vivid dream about the scene in Indiana Jones and the Last Crusade when the hero climbs a set of stairs in a church in Venice and looks down to see a giant X marking the spot on the floor".

"I got up, opened Google Earth, searched for my location, and there, right in the heart of the town, was a giant traffic island shaped like a banana," he said.

"I wrote to the mayor to point this out. I completely respect the town's origin story, but I asked whether the banana-shaped traffic island could be painted road-safety yellow as a homage to the fruit.

"I can't be alone in thinking that a dual homage might be a nice thing to have at the heart of the town, especially if it was visible on Google Earth."

Mayor Nev Ferrier is amused by the idea, and has told AAP he's onboard.

"It's pretty simple. For a bit of paint you can have a banana in the middle of Banana," he said.

He's contacted the Department of Transport and Main Roads, which is responsible for the traffic island, to see if Mr Thompson's grand plan can become reality.

"They're a stickler for rules and regulations but I can't see any problems with it.

"It's just something simple, and probably a bit silly, that a bloke has come up with when he was coming through."

AAP has sought comment from the main roads department.