By Kyle Cheney and Nicholas Wu 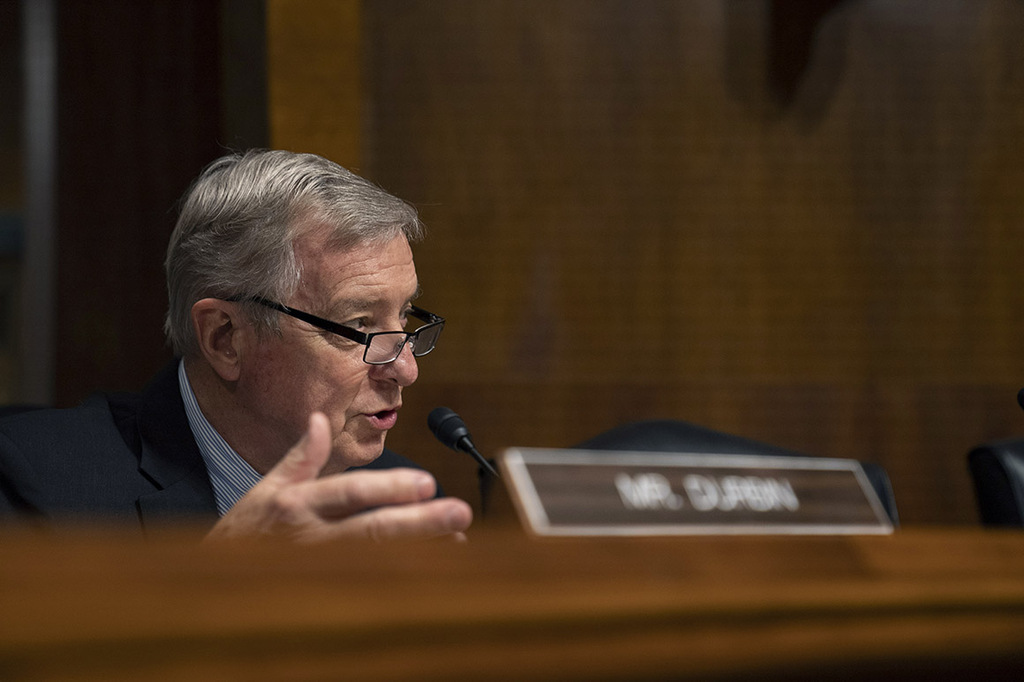 A top career official in President Joe Biden's Justice Department blocked efforts by Senate investigators to probe the handling of voter fraud complaints in the aftermath of the 2020 election, according to transcripts released Thursday.

As Senate Judiciary Committee aides investigating Donald Trump’s efforts to overturn the 2020 election questioned top Trump-era Justice Department officials, a DOJ attorney present for the interviews intervened repeatedly to say such questions were outside the scope of the panel’s inquiry.

The official, DOJ attorney Bradley Weinsheimer — a career official who has worked under attorneys general of both parties — cited guidance he issued in July that paved the way for congressional testimony but limited the topics former DOJ officials were permitted to discuss. But his assertions drew repeated, and sometimes pointed, challenges from Judiciary Committee aides in both parties, the transcripts show.

“It strikes me as completely within the scope of this interview,” said Sara Zdeb, chief oversight counsel for Senate Judiciary Committee Chair Dick Durbin (D-Ill.), after Weinsheimer intervened to block an answer from Byung Pak, a former U.S. attorney from the Atlanta area. Pak resigned on Jan. 4 under pressure from Trump to interfere in election-related matters.

The exchange, one of a dozen times that Weisenheimer blocked former officials from answering committee questions, underscores the tension facing the Biden DOJ and Attorney General Merrick Garland. Although congressional Democrats have largely hailed Garland’s willingness to make witnesses available, the interviews show that the Biden administration will still move to protect Executive Branch interests.

And that tension may sharpen as House and Senate investigators begin to delve more deeply into the Trump White House’s role in orchestrating efforts to overturn the 2020 election.

Senate Democratic investigators had asked Pak specifically to indicate whether he had received any evidence that 2,560 felons voted in Georgia, a claim propagated by the Trump campaign that later proved unfounded. Weinsheimer said that the question was beyond the scope of the committee investigation, which was focused specifically on Trump’s pressure campaign against Pak and other senior DOJ officials.

“You're getting into specific investigations that don't have anything to do with specific pressure put on Mr. Pak, and so I would object,” Weinsheimer said.

“It seems to me that it is inherent in understanding … whether there were particular things that [White House chief of Staff Mark Meadows], the President thought that Mr. Pak's office ought to be looking into that they were not looking into,” Zdeb replied, according to the transcripts.

But Weinsheimer didn’t relent, and Pak’s personal attorney deferred to the Justice Department.

While DOJ has waived questions of privilege so that senior Trump DOJ officials could testify, it's simultaneously sought to protect executive branch prerogatives. The Justice Department declined to comment, but Garland confirmed in an interview Monday that the DOJ is in regular contact with the White House on executive privilege issues related to investigations of former President Trump.

But the department is still keeping a tight lid on specific investigative steps it may have taken to pursue claims of voter fraud, even as aides in both parties said that information was essential to understanding the context of Trump’s push. The Justice Department declined to comment, but Garland confirmed in an interview Monday that the DOJ is in regular contact with the White House on executive privilege issues related to investigations of former President Trump.

Durbin told reporters on Thursday that he isn’t concerned about the refusal to allow the witnesses to answer certain questions because the interviews themselves were extraordinary in the first place.

“What opened the door to this inquiry was the decision by the attorney general that they couldn’t hide behind any type of privilege,” Durbin said Thursday. “They could testify as to what happened. So I think generally speaking, just the opposite is true. I think Merrick Garland’s position has really opened the door for more inquiries like this.”

But a spokesperson for the Judiciary Committee's top Republican, Iowa Sen. Chuck Grassley pointed to the refusal to answer certain questions and said it contradicted DOJ’s promise to be transparent.

"It’s remarkable that while President Biden took the extraordinary step of waiving executive privilege to publicize the former president’s deliberations with his top advisers, Biden’s own Justice Department thwarted the same level of transparency when asked about records the Department provided and what it did to actually investigate claims of irregularities in the 2020 election,” said Grassley spokesperson Taylor Foy.

Most of Weinsheimer’s interjections came during questioning by Republican counsel Josh Flynn-Brown. During an interview with Rosen, Weinsheimer blocked Rosen from answering questions about whether the department opened election fraud cases prior to the certification of the 2020 results. He blocked Pak from answering a similar question as well.

“I would object to that question. It's beyond the scope of the authorization, “Weinsheimer said.

“I think it's precisely in scope and a very critical question for him to answer,” Flynn-Brown replied.

In the same interview, Flynn-Brown asked Pak for examples of the types of fraud claims he received surrounding the 2020 election. Weinsheimer again objected.

“I think in the Donoghue interview I had five objections. In the Rosen interview, I had one. I have two now. So let's see how many I can rack up today,” Flynn-Brown said.

“Then I recommend you stay within the scope, and I won't object, “Weinsheimer replied.

During Democrats’ questioning of Pak, Weinsheimer also stopped Pak from issuing a lengthy answer about his work after Pak appeared to begin discussing efforts to investigate threats against election workers.

“At this point,” Weinsheimer said, “I'm concerned that Mr. Pak may be going beyond the scope.”