Biden announces new vaccine requirements in US to combat COVID 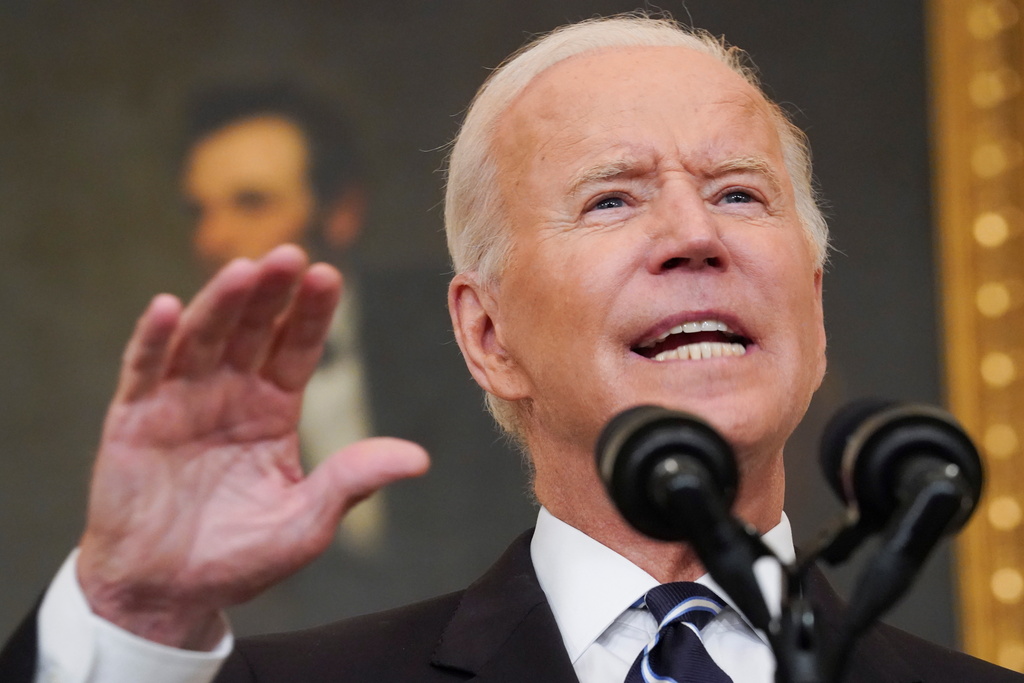 US President Joe Biden has announced a series of measures to boost vaccination rates against COVID-19 in the United States, including requiring federal employees to get inoculated and mandating that large employers ensure their workers are vaccinated or tested weekly for the virus.

In a speech on Thursday, Biden voiced dismay that some Americans were refusing to take the vaccine amid a jump in cases and deaths from the virus largely driven by unvaccinated people.

Biden condemned what he called “pandemic politics”, saying that the new requirements aim to reduce the number of unvaccinated people in the US.

He said about 80 million eligible people  – out of a population of almost 330 million – have yet to have a single vaccine shot.

“I’m announcing that the Department of Labor is developing an emergency rule to require all employers with 100 or more employees that together employ over 80 million workers to ensure their workforces are fully vaccinated or show a negative test at least once a week,” Biden said.

In a separate statement, the White House said the Department of Labor’s Occupational Safety and Health Administration (OSHA) is developing the new rule. Businesses that do not comply with the regulation will face a fine of up to $14,000 for each time it is broken, the Reuters news agency and the Wall Street Journal newspaper reported.

Biden’s forceful action comes as the US and the world struggle to contain a resurgence of the virus.

After a dip in US infection rates early in the summer amid a mass vaccination campaign, the virus has been surging again over the past two months with the emergence of the highly contagious Delta variant.

Biden noted that some big companies have been implementing his plans to ensure vaccinations or to test at least once a week. The president said United Airlines, Disney, Tysons Food and  Fox News “are already requiring this”.

The president also announced that all workers at medical facilities participating in federally subsidised healthcare programmes would be required to get inoculated – a provision that the White House says will cover 17 million people.

“If you’re seeking care at a health facility, you should be able to know that the people treating you are vaccinated – simple, straightforward, period,” Biden said.

This is absolutely unconstitutional:

"The expansive rules mandate that all employers with more than 100 workers require them to be vaccinated or test for the virus weekly, affecting about 80 million Americans."https://t.co/KkDzpN5hTR

Congressman Dan Bishop hinted at the legal challenges that the requirements may face. “Things that are unconstitutional tend not to hold up in court,” he wrote on Twitter.

Some Republican governors also spoke out against the new requirements. “I will pursue every legal option available to the state of Georgia to stop this blatantly unlawful overreach by the Biden administration,” Georgia Governor Brian Kemp tweeted.

The Republican National Committee said in a statement it intends to sue the Biden administration over the vaccine mandate.

In his speech, Biden said patience with unvaccinated people was “wearing thin”, stressing that their refusal to get inoculated was costing everyone the chance to return to pre-pandemic normality.

“My message to unvaccinated Americans is this: What more is to wait for? What more do you need to see? We’ve made vaccinations free, safe and convenient,” he said.

“I issue this appeal to those of you running large entertainment venues – from sports arenas to concert venues to movie theatres – please require folks to get vaccinated or show a negative test as a condition of entry,” Biden said.