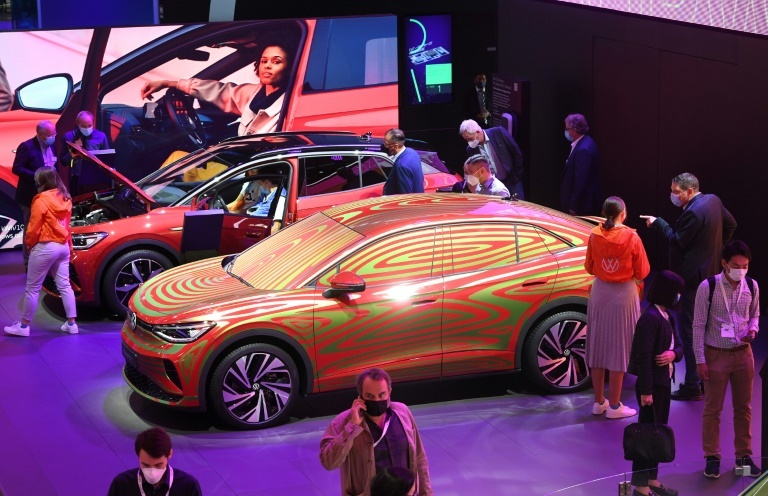 From the influx of two-wheelers to automated valet parking to a major anti-car protest, here are five things to look out for at one of the world's biggest motor shows:

Eased coronavirus-related restrictions and progress in the vaccination campaign mean the show is able to take place in person -- the first big event of its type in Germany since the beginning of the pandemic last year.

Daily visitor numbers are capped at 80,000.Attendees are expected to prove they are double-vaccinated, recently recovered from the virus or in possession of a negative test, and are asked to wear a mask inside.

But outside, the show, which takes place every two years, spills out into the city centre, with events happening throughout Munich open to the public.

Climate change and the shift to sustainable vehicles are on everyone's lips at the show, including German Chancellor Angela Merkel, who opened the IAA with a vote of confidence for the industry.

Over 70 bicycle brands are at the show to peddle vehicles on two wheels -- bicycles even have two halls dedicated to themselves in a sign that the show is earning its new sobriquet IAA "Mobility".

This is not just a conference for petrolheads anymore, and some names more associated with speedy roadsters than bicycles are getting in on the act.

Prestige brand Porsche is flaunting the bike rack on its new Taycan Turbo S and the own-brand electric bike to go with it, in matching colours.

But not every vehicle on show was able to deliver on its green promises.Mercedes E-Performance hybrid, the first from its sports marque AMG, has electricity in the name but a fully-charged battery will take the car only 12 kilometres (7.5 miles).

While sales of people carriers and SUVs continue strongly, some companies are hoping to appeal to drivers who want something a little more economical in space and more efficient in consumption.

"It's not a car," says Wim Ouboter, founder of Swiss scooter brand Micro, whose two sons are developing the pint-sized vehicle, "but it does protect you from the weather and it's heated."

The model is amongst those trying to entice younger buyers with a promise of travel adapted to crowded city life.

Israeli company City Transformer was meanwhile showcasing its Twizy-like model whose wheels can be retracted when driving at low speeds or when trying to squeeze in between cars at a crowded parking.

Finding a parking space may soon be easier for some, as German company Bosch demonstrated its new driverless parking technology.

The automated system coordinates with the parking lot to guide the car to an empty space after its owner has already stepped out of the vehicle.

The cameras in the lot provide "an external view on the exterior of the vehicle" to see if any hazards are approaching, says Robert Exler, responsible for the "automatic valet" system at Bosch.

The technology is ready to be deployed, the company says, but for the moment is only available in the latest high-end vehicles, such as the Mercedes EQS.

"Stop driving climate change" is the message climate activists have for manufacturers at the show.

Protests around the main event are not a new feature at the car summit.In 2019, thousands demonstrating outside the show in Frankfurt.

Activists blocked key motorways around Munich on the opening day of the IAA, forcing road closures and traffic jams.

Further demonstrations are planned for Thursday and Friday, culminating in a larger scale protest on Saturday of a mass bicycle gathering with cyclists converging on the show from all directions.