Bernhard Langer is motivated by his love of golf, desire for more success as he chases Hale Irwin’s win record 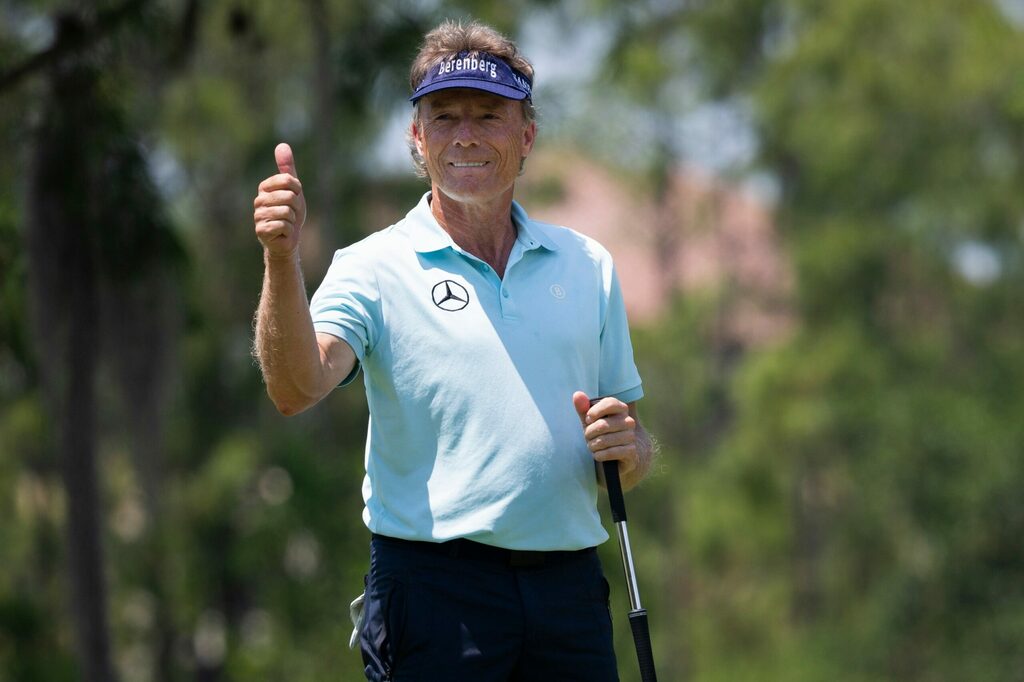 Bernhard Langer dislikes a couple of public perceptions of him as having a methodical, A-to-B golf game and an impenetrable, cold personality.

In regards to the former, he merely points out that any player who has won two Masters, four Senior Opens and sports a winning record in 10 Ryder Cups has imagination and creativity.

As far as the latter, well, who was that guy in a fake beard and wig, running around the Timuquana Country Club during Wednesday’s Constellation Furyk & Friends pro-am rounds, pretending to be a course maintenance worker (moving tee markers around) or a member of the media, depending on which of his fellow players he encountered?

None other than Langer, who said he just got the bug to put on a disguise and act silly.

“It’s fun,” he said on Thursday before the second pro-am Furyk & Friends, which begins on Friday. “Some people think of me as this stoic, focused German and they don’t really know me. I like to laugh, I like to have fun. I have a personality that’s different from that. On the golf course I’m very focused and intense because it’s my job and I’m trying to win and do well. There’s another side of me that likes to have a good laugh.”

Indeed, Padraig Harrington said one of his enduring memories of the 2004 Ryder Cup at Oakland Hills, where Langer captained the European team to a one-sided rout of the U.S., was discovering Langer’s sense of humor in the team room.

“Probably the most surprising thing about his captaincy is his sense of humor because he comes across as being very straight,” Harrington said. “But he had a great sense of humor that week. It was the one thing that jumped out that week that you didn’t know about.”

Langer also has been laughing all the way to the bank since joining the PGA Tour Champions in 2007. He won and had four top-10 finishes in five starts that year, won three in 2008 and hasn’t stopped yet. Langer has won 41 times on the senior circuit, four short of Hale Irwin’s record, and holds the record with 11 PGA Tour Champions majors, including four Senior Open titles and three Senior Players Championships.

Langer has been voted player of the year eight times, won 10 money titles and enters this week No. 1 on the Charles Schwab Cup points list, bidding for a record sixth Schwab Cup in a row.

Just for good measure, he shot his age of 64 in August, at the Ally Challenge — on his birthday.

All of that was after Langer carved out a career that was good enough to earn induction into the World Golf Hall of Fame in 2001: 42 European PGA Tour titles, second all-time, two Order or Merits, a 21-15-6 record in the Ryder Cup and his Masters titles in 1985 and 1993.

In his 15th season on the PGA Tour Champions (all with longtime caddie Terry Holt of Ponte Vedra Beach), Langer said it’s getting harder to win. He has one victory in the merged 2020-21 season but is always lurking late Sunday, with 21 top-10s in 29 starts, and six in his last 10 starts.

With a trim waistline, an unlined face that looks 20 years younger and seemingly boundless energy, Langer shows no signs of slowing down.

I’ve always said that there are three major things [to keep him playing],” he said. “If I’m healthy enough to do, if I still love the game and if I’m successful. If one of those three is missing, or two, maybe it’s time to think about [retiring] Right now, I’m still reasonably healthy, I love what I’m doing and I’m still successful.”

Langer’s peers remain in awe of his longevity.

“It’s incredible … it’s one of those true incredible stories in golf, really,” said Ernie Els. “To do what he’s done and at 64 he’s leading the Charles Schwab Cup again, think about it … 64, you know? You’ve still got to practice and keep your game sharp, you’ve got to travel, you’ve got to get the body going. He plays like a young man and he’s got that desire still, which is incredible.”

Harrington said Langer survives and thrives because of his iron and wedge game, his boundless energy and his competitive heat.

He said he watched Langer practice at the PNC Father-Son one year (which Langer has won three times, two with his son Jason and one with his other son Stefan) and marveled at the shots Langer rained down on one flag from wedge distance.

Bernhard Langer shot a 64 on his 64th birthday 👏 (Via @ChampionsTour) pic.twitter.com/JeOQbWxHpZ

“Just his personality, his nature,” Harrington said. “Obviously he’s physically very fit, always has been. If you stand behind him on the range, you know why he’s that good. From like 140 yards, if you watch any of those short flags out there, his ball just comes down all over it. He’s particularly good and you can see why he is competitive out here. One good wedge shot always equals a good drive anywhere. You can see Bernhard from 7-iron down is really good and he’s solid everywhere else.”

Langer said one reason he keeps grinding is the drive to master a game no one really does … and he admits it.

“It can be brutal … it can bring you back down,” he said. “It’s a very humbling game. You play great one day, you think you’ve got it and the next day it brings you right back down to earth. You never will achieve perfection. People say, ‘you’re a perfectionist.’ I disagree because you’re never going to achieve that. But I love the process.”

He should have a great chance this week at Timuquana, which plays right into Langer’s deadly combination of precision and imagination on the Donald Ross design.

Golf, food, music and community: Constellation Furyk & Friends offers something for everyone

“It’s in great shape … a beautiful spot,” he said of the course. “I enjoy most Donald Ross courses. His trademark are greens that slope back to front and fall off everywhere. You have to be very precise and think your way around it. You can’t attack every flag you look at and hope to get away with it.”

Langer said Irwin’s record is in his sights — even though he believed at one point that it was unbreakable.

He might have caught Irwin by now but has lost five playoffs in the last four years.

“To win 45 times in a few years is fantastic,” he said. “I thought it was never going to be broken. It may still never be broken. I haven’t given up on it yet but it’s getting harder.”

But Langer will keep coming back to the golf course until his passion and body run out. Don’t count on either any time soon.