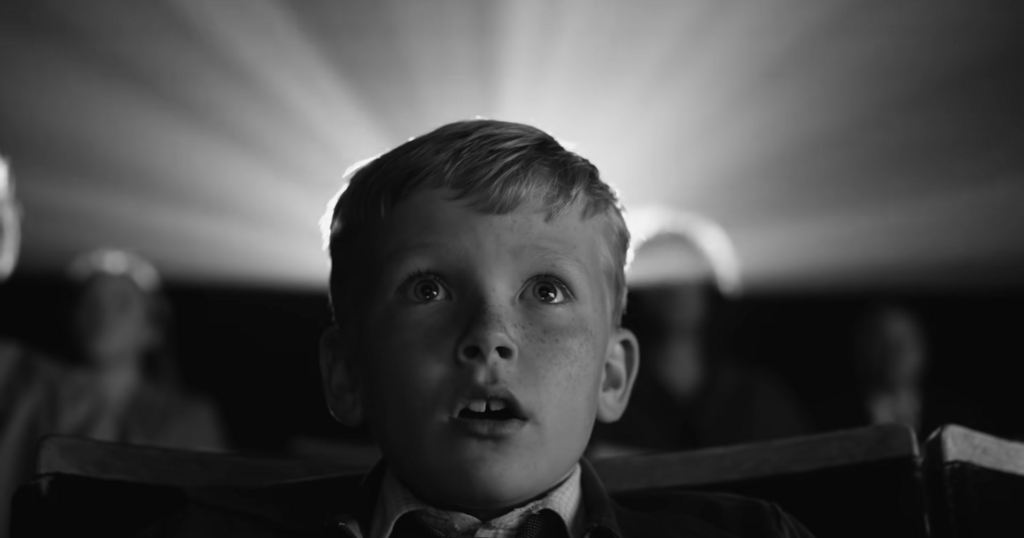 Kenneth Branagh has produced his most personal and affecting film yet with Belfast.

Set in the titular city during the 1960s and amid The Troubles, innocent and sweet young boy Buddy (newcomer Jude Hill) is growing up in a community he loves with a caring mother (Caitriona Balfe) and a father (Jamie Dornan) working hard away from home to provide for the family.

Buddy loves school, his friends, his grandparents (Ciaran Hinds and Judi Dench) and even has a young crush.

However, the civil discord engulfing the country around him means that little Buddy’s world will change forever.

Inspired by his own childhood, Branagh has helmed a touching and gorgeous black and white portrait of the small world of his youth and examined a tumultuous period in history through the eyes of a child.

The naivety, sweetness and lovability exuded from charming child star Jude Hill is certainly something to behold, anchoring a film at his tender age is truly a feat and Branagh is lucky to have such a wonderful young actor.

Hill is accompanied by a wonderful supporting cast of adults too.

Vitally, Outlander star Caitriona Balfe is both earthy and ethereal as Buddy’s mother, the most conflicted character in the film struggling to let go of her past to embrace a necessary future. Her vibrant but teary eyes are often seen betraying so much feeling.

Meanwhile, Jamie Dornan is used at his most charismatic and noble best here as a father dealing with long absences but an undimmed love for his home.

Of course, it is most easy too to love Hinds and Dench as the saintly but incredibly funny grandparents, exuding warmth, understanding and tragedy in spades.

Elsewhere, there is an overwhelming feeling of comfort to Belfast which makes the pervading sense of doom and danger from the Troubles all the more moving and disturbing when they do rear their head - often in the form of a thoroughly sinister Colin Morgan.

The film doesn’t get too bogged down in the politics of the Troubles beyond the overall message of prizing similarities over difference, which may prove too simplistic for some but it is best understood as being seen through the eyes of a child and of a family just wishing to live their lives in peace.

Throughout, Branagh is clearly passionate for his location in the film but also for the arts. the only glimmers of colour offered are shown through visits to the cinema and theatre, which feels so utterly at home with Branagh's filmography and helps add to the sense of awe that Buddy feels in such escape.

Whether it is through the humour of friends, the tears of loss or the joy of dancing with the one you love, Branagh has captured emotions in that wonderful way he knows how with Belfast and it really hits the mark as a result.

Belfast is a beautifully personal ode from Sir Kenneth Branagh. to growing up and having an immortal connection to one's roots.

*Belfast was shown at the BFI London Film Festival 2021 and is released in UK cinemas on February 25, 2022.