Baseball: Israel routs France, eyes a place in the quarterfinals 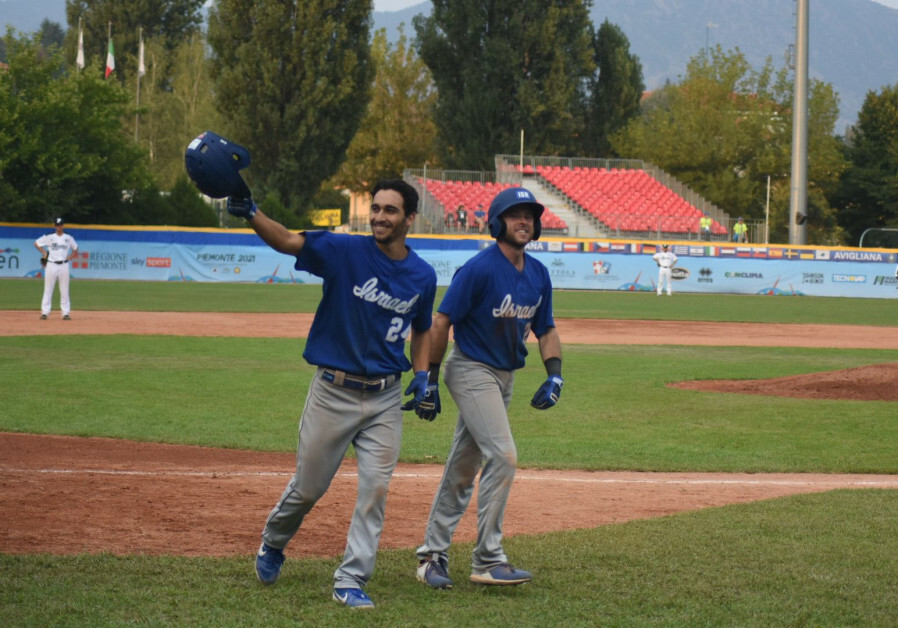 Assaf Lowengart launched two monstrous moonshots, each with two men aboard, to lead Team Israel to a 10-0 drubbing of France for its second consecutive victory in the European Baseball Championships in northern Italy.

Israeli pitchers DJ Sharabi and Ben Wanger combined for a 4-hit shutout while striking out 11 Frenchmen. The win enabled the Blue and White to sit alone atop its 4 team grouping in the 16 team tournament. One more win Tuesday (over England) – or a Russian loss to the French – will guarantee Israel a spot in the quarterfinals.

Coming less than 18 hours after it eked out a 2-1 nail-biter in its opener, the 10-run rout over France was a welcome relief for an Israeli team that has been fighting for its survival in every game it has played over the last month, dating back to last month’s Olympics. However, as the European announcer who was broadcasting the game commented, “This was the closest 10-0 win in memory”.

Israel opened the scoring in the top of the first as Mitch Glasser continued his team-leading hitting by stroking a double to left, putting runners at second and third. Jordan Petrushka, who scored the winning run the previous day in the walk-off over Russia, brought both men home with a sharp single to make it 2-0.

David “DJ”  Sharabi who had pitched the ninth inning the previous day, was pressed into starting duty and responded by holding France’s big hitters scoreless over 31/3 innings. “I pitched as hard as I could for as long as I could,” said an exhausted, yet exhilarated Sharabi. “I think the real challenge is to do whatever it takes to get the batters out even if you’re tired. I told the coach to take me out when he thought I was done because I wasn’t going to give in to anyone or come out by myself.”

Indeed, manager Nate Fish let Sharabi go longer than he’d pitched in years before handing the ball over to first-baseman Benny Wanger in a move that caught the French by surprise. Wanger is a two-way player who made a name for himself as Yale’s closer during his college days and loves his role, playing every day along with pitching in relief. He picked up on the mound where Sharabi left off and pounded the strike zone mercilessly, getting ahead of nearly every French hitter and extending his appearance, one scoreless inning at a time. “I knew how important it was to keep us ahead in the game.”

Wanger’s efficiency paid off. Israel came to bat in the sixth clinging to a thin 2-run margin, when Lowengart unloaded the first of two three-run shots, breaking the game open. Wanger kept rolling along, aided by several outstanding catches by centerfielder Rob Paller that help keep the French off the bases and off the scoreboard.

Finally, in the ninth, Lowengart came up once again with two men on. “In this short tournament format, every run counts and can determine a team’s placement. So even though we were up, I stayed in the zone and was able to drive the ball once again,” this time over the wall in dead center.

Along with Lowengart’s hitting (3 for 5 with 6 RBIs), Mitch Glasser and Wanger had multiple hits and the entire team played flawlessly in the field, led once again by shortstop Ty Kelley and catcher Tal Erel. Lowengarten too turned a couple of gems at third base, leading Manager Nate Fish to remark  that while “Lowengart with two 3-run homers accounted for most of the scoring, as always it was a team win.”

Despite their auspicious beginning, the players spent little time celebrating as they prepared for the next game after yet another minimal 18-hour break. “I’m ready to go again if called upon. I can rest over Yom Kippur,” said the observant Sharabi, who helps his father lead services.

The players are staying in a COVID-free protective “bubble” and regard each other as family members, even as they stay connected from afar with relatives. “I was grateful that my parents and sister Maya flew from our home at Moshav Timurin to support me here, despite the draconian Corona restrictions and not being able to meet me,” said Lowengart. The soft-spoken 23-year-old college student had to remind himself to look up and wave following his second dinger.

Wanger’s folks were also in the stands, for which he was truly appreciative (“especially since they couldn’t join us in Tokyo”). Petrushka and other player’s families also made the journey. Hopefully, they will all have even more to cheer about in coming games. But now the players are all business.