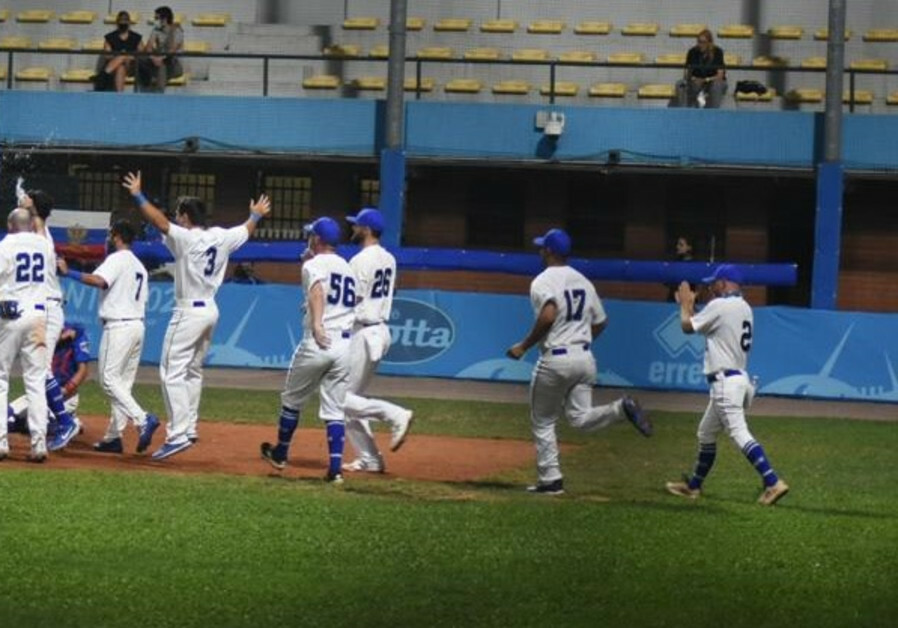 Israel's national baseball team beat Russia 2-1 in extra innings in its opening game of the 2021 European Championships, which got underway last night in Turino, Italy.

Ace pitcher Joey Wagman led the way by holding the Russians to one run over eight innings of brilliant 3-hit ball, keeping the Blue and White in contention.  Wagman made only one mistake, hanging a curveball to slugger Solar Geides who doubled home David Castillo to put the Russians up 1-0 in the fourth. “Wags” quickly bore down, by stranding Geides in scoring position as he retired the next two hitters to end the inning. He then shut down the Russians the rest of the way without allowing a hit and ringing up a total of seven strikeouts.

Wagman’s gutty performance set the stage for Israel’s veteran players to even the score in the bottom of the sixth by pushing across a hard-earned run. Former Mets infielder Ty Kelly lined a one-out single to left field and then advanced to third on center-fielder Rob Paller’s sharp single to right. This brought up Mitch Glasser, who had led all Israeli players in the recent Tokyo Olympics with a hefty .412 batting average.

Glasser had already stung starter Andrei Lubanov by breaking up the Russian’s no-hitter with a solid single to left in the fourth. This time, however, Glasser brought Kelly home with the “Ty-ing” run by executing "small ball" to perfection.  Mitch laid down a textbook sacrifice bunt dictated by Israeli manager Nate Fish,  who was leading Team Israel for the first time since taking over after the Olympic campaign.

The tension mounted as both sides put up goose eggs the rest of the way. Manager Fish made yet another tough decision by replacing Wagman going into the ninth. The Russians quickly put runners on second and third with a single and an Israeli miscue of a sacrifice bunt. Unflappable reliever David “DJ” Sharabi got a tough out with the infield drawn in.

Fish then made yet another gutsy move by loading the bases with an intentional walk and bringing in Israel’s newest player, fireballer Charles “Bubby” Rossman. In his first appearance for Team Israel, the new immigrant from California rewarded his manager’s confidence by inducing an inning-ending double play.

Israel failed to score in the bottom of the ninth, setting up an extra-inning nail-biter. In accordance with international rules, geared to prevent long games, the 10th frame begins by placing runners at first and second bases. This didn’t phase Rossman who continued where he left off by quickly inducing yet another double play before fanning the final batter with fastballs in the mid-90s, to hold the Russians scoreless once again.

When Israel got its chance, Fish once again pulled a rabbit out of his hat by sending up veteran Ofir Katz as a pinch hitter with the singular purpose of bunting both players to second and third. However, Russian closer Adrian Rodriguez Telles, who had been unhittable, fired two heaters that Katz could only foul off, which appeared to foil Fish’s strategy.

Undeterred, Fish rolled the dice once again and Katz came through by bunting the ball into fair territory. Although the Russian pitcher had a clear shot to get the lead runner, he hurried his throw to third and all three Israeli runners were safe, loading the bases with nobody out. Fortunately for Israel, this was not the final gift from the shaken Russian hurler, who then balked home Israeli youngster Jordan Petrushka with the winning run.

Wagman was quick to credit his catcher Tal Erel, who played a terrific game behind the plate, and the rest of his teammates who played solid defense and turned in three stellar double plays. Manager Fish was delighted by the performances turned in by his young Israeli players who were playing in their first senior tournament, while noting the leadership provided by Wagman and other Olympic veterans like Glasser, Sharabi and Kelly (who put on a clinic at shortstop in addition to his two hits).

Fish was proud of his entire team saying, “all these guys hung tough, continuing to fight until they found a way how to win. It was a team effort and everybody contributed.”

Team Israel faces France on Monday at 5:00 p.m. Israel time before completing its first round of championship play against England on Tuesday morning.