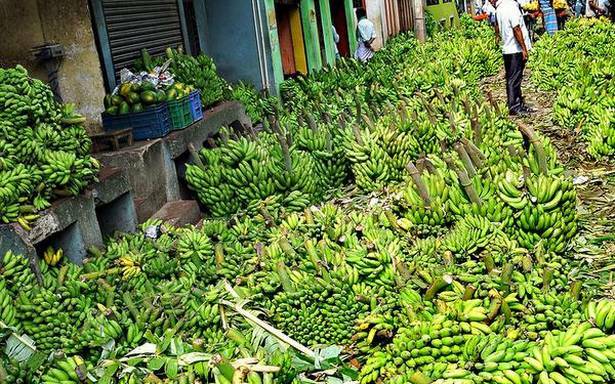 Banana has been assigned for Mysuru in “One District One Product” list approved by the Centre to promote micro-food processing enterprises.

Mysuru grows a wide variety of bananas, including the Nanjangud Rasabale, a unique variety, which enjoys the Geographical Indication (GI) tag, Pacha Bale (Cavendish variety), Yalakki, and G9, besides the Nendran variety that commands a good market in neighbouring Kerala.

“We wanted the food processing industries from across the country to come and see the variety of bananas grown in Mysuru for use as raw material in their industries,” said an official of the Horticulture Department here.

Bananas are grown in about 15,000 hectares of land in Mysuru district and the annual production of the crop exceeds 1.5 lakh tonnes. A large quantity of the produce is consumed locally. For, bananas not only have a relatively short shelf life, but also grown in abundance in other tropical countries.

However, through the workshop-cum-exhibition, the officials were exploring the prospects of use of bananas by the food processing industries and export of the banana-based food products. According to officials from the Agriculture Department, technologies were available with CFTRI, a premier food technology laboratory in Mysuru, for extraction of juice and powder from bananas. A few entrepreneurs had even undergone training at CFTRI. The entrepreneurs coming forward to set up micro food processing industries were eligible for subsidy and other forms of assistance under the Centre’s “One District One Product” scheme.

“Since the event was not just to exhibit bananas, but to attract food processing industries to purchase bananas from Mysuru, the workshop-cum-exhibition will be held after Dasara concludes,” said an official from Horticulture Department.