Australian house prices could be about to flatten out after rising 16.8% in last year

By Paul Karp and Amy Remeikis 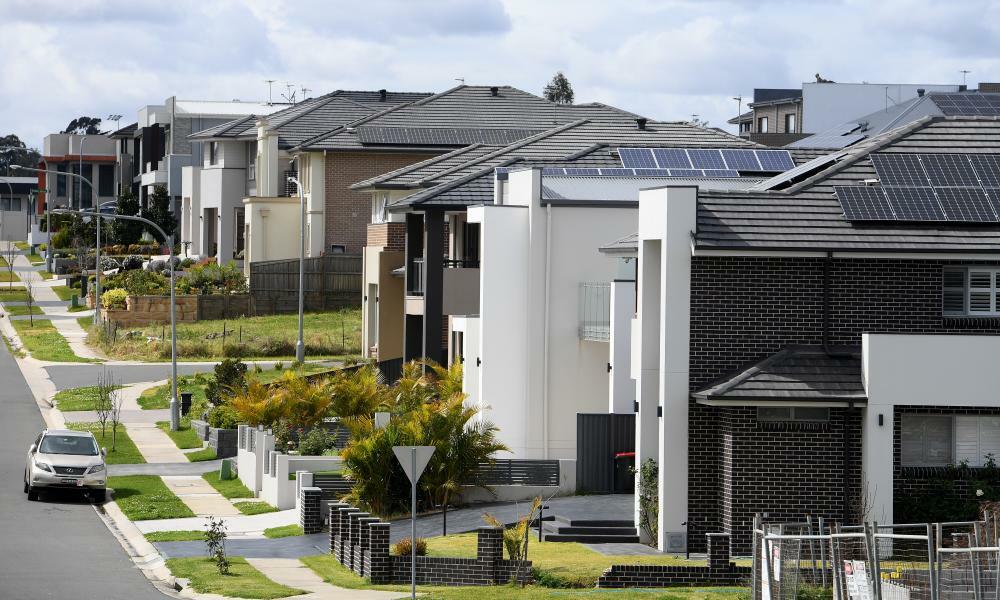 Residential property prices in Australia’s capital cities increased by 6.7% in the June quarter, but the Treasury believes record prices could be about to flatten out.

According to the Australian Bureau of Statistics, property prices have grown by 16.8% over the last 12 months and 19% since the start of 2020 as record low interest rates drive both first homebuyers and investors into the market.

On Tuesday the Reserve Bank governor, Phil Lowe, ruled out using interest rates “to cool the property market”, meaning low rates were likely to stay until 2024.

But at a parliamentary inquiry on housing affordability, Treasury officials argued the fact rates would not be cut from their record low of 0.1% should help slow the surge in prices.

Lowe said raising interest rates to reduce house prices was “not on our agenda”. “While it is true that higher interest rates would, all else equal, see lower housing prices, they would also mean fewer jobs and lower wages growth,” he said. “This is a poor trade-off in the current circumstances.”

While the bank kept an eye on the sustainability of household borrowing, Lowe said it was not interest rates or curbs on lending which would address housing prices, but addressing the “structural factors that influence the value of the land upon which our dwellings are built”.

“The factors include: the design of our taxation and social security systems; planning and zoning restrictions; the type of dwellings that are built; and the nature of our transportation networks.”

At the housing affordability inquiry, John Swieringa, the assistant secretary of Treasury’s social policy division, attributed long-term house price growth to rapid population growth before the pandemic; the structural decline in interest rates over decades; and the effect of financial deregulation in the 1980s.

Crystal Ossolinski, the director of domestic demand in the macroeconomic group, said “strong demand” during the pandemic had been driven by “changes in preferences” – as people wanted larger houses – and reduced consumer spending elsewhere in the economy.

Ossolinski suggested that “demand factors are tapering off” because there would be no more interest rate cuts and population growth had stalled while migration had been paused.

Swieringa conceded that while some federal government policies may have added to demand for housing, grants such as homebuilder had also added to supply and loan guarantees had helped first homebuyers overcome the main “pinch point for affordability” in getting together a deposit.

The RBA assistant governor, Luci Ellis, told the hearing that supply was a “major factor” but warned that “building more homes won’t bring down prices a lot”, only blunt growth. “Increasing supply does help but it is not a panacea.”

Ellis warned against housing affordability policies that gave buyers more to spend, stating that “all that does is bid up prices”, and noted that access to superannuation was one such policy that would result in people spending more on housing.

Later, in his speech, Lowe said the Delta outbreak had put a halt to Australia’s bounceback, with the central bank expecting the economy to “contract significantly” in the September quarter, before growth returned in the December quarter.

The RBA did see next year being better, but tempered expectations the recovery would be as strong as it was the last time round, with Lowe warning it would depend on how Australians reacted to “living with Covid”.

“This is quite different from our earlier experience, when the number of cases was close to zero, and there was a very quick bounce back,” Lowe said. “Whether the same will be the case this time remains to be seen. Much will depend upon our attitude to risk and how our society deals with the ongoing rate of infection.”

Lowe said the cash rate would stay on hold until “actual inflation is sustainably within the 2–3% target range”, likely not until 2024 due to low wage growth despite a tightening labour market.

“Even in industries where there has been strong demand for labour, wage increases remain mostly modest,” he said.

“Our judgment is that it will take some time for wage increases to lift to a rate that is consistent with achieving the inflation target. There is a lot of inertia in the wage setting process and the experience of the past decade is unlikely to be reversed quickly.

“This inertia comes from among other things: multiyear employment contracts; a strong cost-control mindset of Australian business; and low and stable inflation expectations.”

Lowe acknowledged that young people were “paying a heavy price” during the Covid pandemic due to lockdowns and public health measures, citing increasing incidence of mental health issues and calls to support services.